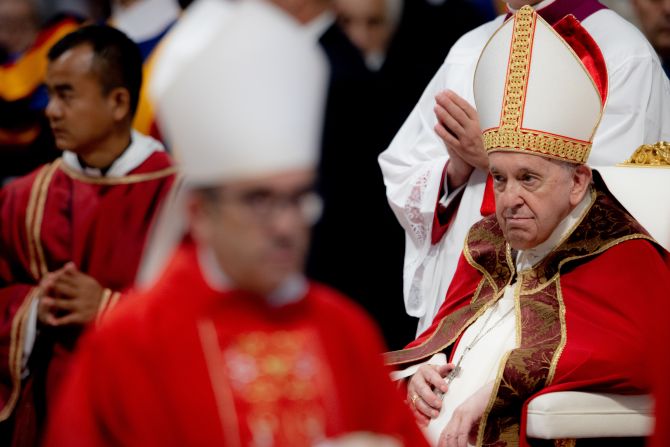 Pope Francis called Wednesday for Catholics not to retreat into their own groups, but to open the church doors and work together to care for the vulnerable in the world.

“What can we do together, as Church, to make the world in which we live more humane, just and solidarity, more open to God and to fraternity among men? Surely we must not retreat into our ecclesial circles and remain pinned to some of our fruitless debates,” he said at Mass on June 29 for the feast of Saints Peter and Paul.

📹 HIGHLIGHTS | Pope Francis presided over the opening rites of the Mass for the feast of Saints Peter and Paul. He also gave the homily and prayed before the tomb of St. Peter after Mass with a delegation from the Orthodox Ecumenical Patriarchate of Constantinople. pic.twitter.com/8nCEthXXYA

“Together we can and must continue to care for human life, the protection of creation, the dignity of work, the problems of families, the treatment of the elderly and all those who are abandoned, rejected or treated with contempt,” he said. “In a word, we are called to be a Church that promotes the culture of care, tenderness and compassion towards the vulnerable.”

During the Mass in St. Peter’s Basilica, Pope Francis also blessed the pallia for the metropolitan archbishops appointed in the last year.

Pallia are white woolen vestments adorned with six black silk crosses given to metropolitan archbishops. They symbolize the metropolitan’s authority and unity with the Holy See.

The title of “metropolitan archbishop” refers to the archbishop of a metropolis, which is the primary city of an ecclesiastical province or region.

There were 32 metropolitan archbishops from 24 countries present in Rome to receive their blessed pallium from Pope Francis on June 29.

“In communion with Peter, [the metropolitan archbishops] are called to ‘get up quickly,’ not to sleep, and to serve as vigilant sentinels over the flock,” Francis said. “To get up and ‘fight the good fight,’ never alone, but together with all the holy and faithful people of God.”

At the end of Mass on Wednesday, Pope Francis handed each archbishop his pallium in a small box tied with a brown ribbon.

In his homily, Pope Francis spoke about the Catholic Church’s ongoing synodal path, which is leading up to the Synod on Synodality, which will take place in October 2023.

“The Synod that we are now celebrating calls us to become a Church that gets up, one that is not turned in on itself, but capable of pressing forward, leaving behind its own prisons and setting out to meet the world, with the courage to open doors,” he said. “Let us open the door. The Lord calls.”

The pope said sometimes the Church has open doors, but only to condemn people and send them away.

“A Church that does not linger in its sacred precincts, but is driven by enthusiasm for the preaching of the Gospel and the desire to encounter and accept everyone. Let us not forget that word: everyone,” he said.

“Go to crossroads and bring everyone, the blind, the deaf, the lame, the sick, the righteous and the sinner: everyone,” he continued. “This word of the Lord should continue to echo in our hearts and minds: in the Church there is a place for everyone.”

Pope Francis condemned an attitude of laziness in the Church.

“Often we are like Peter in chains, imprisoned by our habits, fearful of change and bound to the chains of our routine. This leads quietly to spiritual mediocrity: we run the risk of ‘taking it easy’ and ‘getting by,’ also in our pastoral work,” he said.

“Our enthusiasm for mission wanes,” Francis added, “and instead of being a sign of vitality and creativity, ends up appearing tepid and listless.”

“Then, the great current of newness and life that is the Gospel becomes in our hands — to use the words of Father de Lubac — a faith that ‘falls into formalism and habit…, a religion of ceremonies and devotions, of ornaments and vulgar consolations… a Christianity that is clerical, formalistic, anemic and callous,’” he said.

At the end of Mass, the Patriarchal Holy Trinity Cathedral Choir of Tbilisi, an Orthodox choir from the country of Georgia, chanted “Ave Maria” by Ilia II.

The Tbilisi choir also gave a two-hour performance in the Sistine Chapel on June 26.

A delegation from the Orthodox Ecumenical Patriarchate of Constantinople attended the Mass for Saints Peter and Paul.

Pope Francis and the delegation prayed together before the tomb of St. Peter after Mass. The diocesan phase of the Synod on Synodality will last from October 2021 to April 2022.