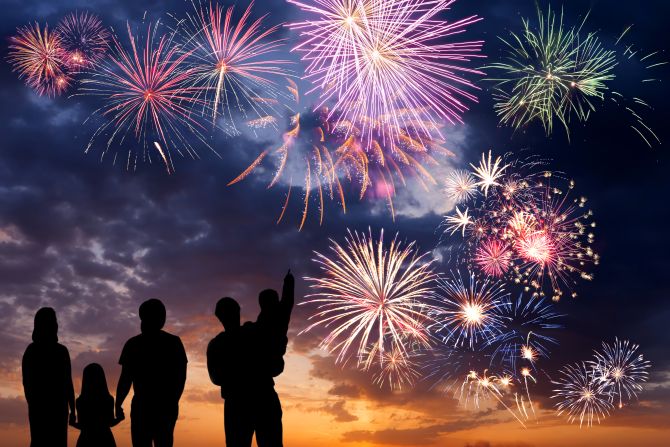 Americans celebrate their country’s independence on July 4th — as well as the people who formed the United States into the country that it is today. Those include American saints.

The U.S. bishops count a total of 11 American saints who dedicated their lives to God and those in need in this country. Here are their stories.

Seton became the first American-born saint in 1975. Born in New York City, she married the love of her life at 19 and welcomed five children. She endured much suffering: Her husband William died of tuberculosis after facing financial trouble. Two years later, Seton converted to Catholicism and went on to found the Sisters of Charity of St. Joseph — the first order of religious women in the U.S. She founded several schools, including the first free U.S. Catholic school. Today, she is considered the founder of the U.S. Catholic School system.

Neumann is the first male U.S. citizen to become a saint. Originally from Bohemia, known today as the Czech Republic, he traveled to New York City to be ordained a priest. At the time, he was one of only 36 priests serving 200,000 Catholics in the New York area. He joined the Redemptorists at age 29 and became the first member to profess vows in the U.S. Neumann served as a missionary and, later, as the fourth bishop of Philadelphia. He founded the first diocesan Catholic school system in the United States, which grew from two to 100 under his care. He was canonized in 1977.

Tekakwitha, also known as the “Lily of the Mohawks,” became the first Native American saint in 2012. She was raised in Auriesville, New York, by her uncle, a Mohawk chief, after her parents died from a smallpox epidemic. After encountering Jesuit priests in her village, she converted to Catholicism at 19. Her relatives and the village attempted to punish her for her beliefs. She later ran away to Montreal, Canada, where she could practice her faith and live out her life as a consecrated virgin.

A Philadelphia heiress raised by devout parents, Drexel dedicated her wealth and her life to serving Native Americans and African Americans. She founded the Sisters of the Blessed Sacrament for Indians and Colored People. Her work included starting schools in 13 states for African Americans, as well as 40 mission centers and 23 rural schools. She also established 50 missions for Native Americans. Together with her order, she founded New Orleans' Xavier University, the only historically black U.S. Catholic college. She became a saint in 2000.

Her feast day is March 3.

A Jesuit priest from France, Jogues served as a missionary to the Indians in “New France” and became one of the North American martyrs. When he and his companions traveled to Iroquois country in 1641, they were tortured and imprisoned by the Mohawks. He survived and even baptized some of the Native Americans before he escaped back to France. But he felt called to return, even though he knew he might not survive a second time. He was killed with a tomahawk in Auriesville, New York. He became a saint in 1930.

A missionary from Italy, Cabrini founded the Missionary Sisters of the Sacred Heart of Jesus. When she first traveled to New York City, she discovered that the house she had planned to turn into an orphanage was unavailable. When the archbishop advised her to return to Italy, she refused. Instead, she founded orphanages, hospitals, convents, and schools, many of which served Italian immigrants. She became the first U.S. citizen to be canonized a saint in 1946.

A missionary from France, Guérin founded the Sisters of Providence of Saint Mary-of-the-Woods. At 25, she first joined the Sisters of Providence of Ruillé-sur-Loir before leading a group of sisters to Indiana in 1840. There, she opened a convent and the first girls’ boarding school in that state. Even as her health failed her, she continued to open schools throughout Indiana and Illinois while facing anti-Catholic sentiment. She became a saint in 2006.

Originally from Belgium, St. Damien dedicated his life as a missionary to those with leprosy in Molokai, Hawaii. At 19, he joined the Congregation of the Sacred Hearts of Jesus and Mary. He then volunteered to serve those with leprosy who were quarantined on the island of Molokai. He spent his time building schools, churches, and hospitals. After contracting and dying from leprosy himself, he became a saint in 2009.

Born in Germany, Cope joined the Sisters of the Third Order of Saint Francis in Syracuse, New York, before serving multiple times as the novice mistress of her congregation and the superior of St. Joseph's Hospital. She later offered to go to Hawaii to serve those with leprosy. The Franciscan Sisters of Syracuse, led by Cope, joined St. Damien in Molokai. A former teacher and principal, Cope focused on education. She also brought joy and inspired the women there by gifting them with bright scarves and dresses. She became a saint in 2012.

Serra served as the founder of the Spanish missions in California. Originally from Spain, he joined the Franciscans before becoming a missionary. He served those in Mexico before going to California, where he founded nine of the 21 Spanish missions and taught the Native Americans various trades. He became the first saint canonized on U.S. soil in 2015.

His feast day is July 1. The Vatican has yet to publicly acknowledge that the meeting took place. The feast of Saint Peter and Saint Paul, whose official name is the joint Solemnity of Saints Peter and Paul, is the commemoration of the martyrdom in Rome of the apostles Simon Peter and Paul of Tarsus, celebrated on June 29. "I encourage you to use well and responsibly the time that is available to you," Pope Francis said in a video message.