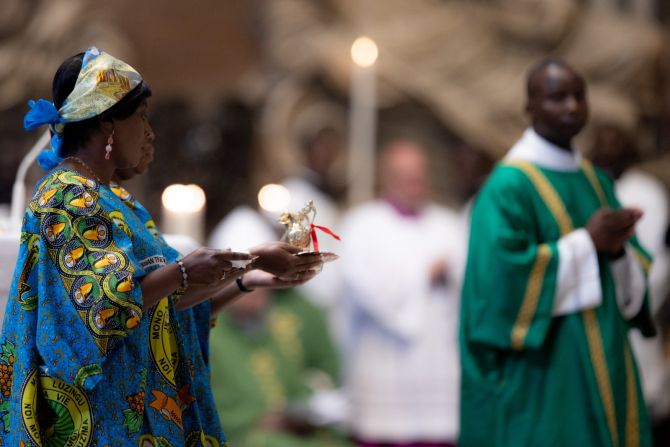 Amid singing, clapping, and dancing to traditional Congolese music, Pope Francis celebrated the Zaire Use of the Ordinary Form of the Roman Rite in St. Peter’s Basilica on Sunday.

The pope began his homily on July 3 with the word, “esengo,” which means “joy” in Lingala, the Bantu-based creole spoken in parts of the Democratic Republic of Congo and by millions of speakers across Central Africa.

Pope Francis celebrated the Mass for Rome’s Congolese community on the day that he was due to offer Mass in Kinshasa before his trip to Africa was canceled at the request of the pope’s doctors.

The pope, whose mobility has been limited due to a knee injury, remained seated throughout the Mass. Francis presided over the Liturgy of the Word and gave the homily. Archbishop Richard Gallagher offered the Liturgy of the Eucharist.

“Today, dear brothers and sisters, let us pray for peace and reconciliation in your homeland, in the wounded and exploited Democratic Republic of Congo,” Pope Francis said.

“We join the Masses celebrated in the country according to this intention and pray that Christians may be witnesses of peace, capable of overcoming any feeling of resentment, any feeling of vengeance, overcoming the temptation that reconciliation is not possible, any unhealthy attachment to their own group that leads to despising others.”

The pope underlined that the Lord calls all Christians to be “ambassadors of peace.”

The Democratic Republic of Congo has experienced a wave of violence in recent years. Dozens of armed groups are believed to operate in the eastern region of DR Congo despite the presence of more than 16,000 UN peacekeepers. Local Catholic bishops have repeatedly appealed for an end to the bloodshed.

"If you live in his peace, Jesus arrives and your family, your society changes. They change if your heart is not at war in the first place, it is not armed with resentment and anger, it is not divided, it is not double, it is not false. Putting peace and order in one's heart, defusing greed, extinguishing hatred and resentment, fleeing corruption, fleeing cheating and cunning: this is where peace begins.”

Peace was expected to be a key theme of the pope’s canceled Africa trip. Pope Francis was planning to spend July 2-5 in the Congolese cities of Kinshasa and Goma, and July 5-7 in the South Sudanese capital Juba.

After the Vatican announced that the trip was postponed due to the ongoing medical treatment for the pope’s knee pain, Pope Francis said on June 13: “We will bring Kinshasa to St. Peter’s, and there we will celebrate with all the Congolese in Rome, of which there are many.”

About 2,000 people were present in the inculturated Mass in St. Peter’s Basilica on the first Sunday of July.

Women in brightly colored traditional dresses sang and danced as they prayed the Gloria. People clapped and shouted as Archbishop Richard Gallagher incensed the main altar.

The gifts were brought up to the altar in a dancing procession. Religious sisters in the pews stepped from side to side together to the music.

At the end of the Mass, Pope Francis greeted some members of the local Congolese community from his wheelchair.

“May the Lord help us to be missionaries today, going in the company of brother and sister; having on his lips the peace and closeness of God; carrying in the heart the meekness and goodness of Jesus, Lamb who takes away the sins of the world,” the pope said.

The Zaire Use of the Ordinary Form of the Roman Rite is an inculturated Mass formally approved in 1988 for the dioceses of what was then known as the Republic of Zaire, now the Democratic Republic of the Congo.

The only inculturated Eucharistic celebration approved after the Second Vatican Council, it was developed following a call for adaptation of the liturgy in "Sacrosanctum concilium," Vatican II's Constitution on the Sacred Liturgy.

In a video message in 2020, Pope Francis said: "The experience of the Congolese rite of the celebration of Mass can serve as an example and model for other cultures.” The pope hopes to celebrate Mass for Rome’s Congolese community on July 3.