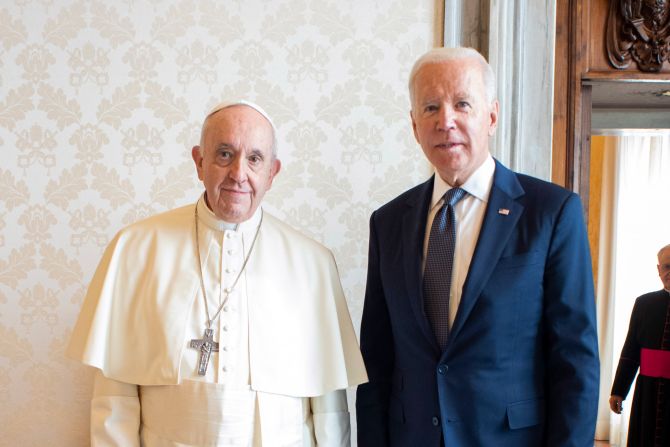 Pope Francis has described it as an "incoherence" that President Joe Biden, a Catholic, is in favor of legal abortion.

During an interview with Univisión and Televisa broadcast July 12, Pope Francis spoke about abortion and Biden's position, after being asked about whether to admit politicians who promote legal abortion to Holy Communion.

The Holy Father affirmed that there is scientific data that show that “a month after conception, the DNA of the fetus is already there and the organs are aligned. There is human life.”

“Is it just to eliminate a human life?” he then asked.

As for the defense of abortion by the U.S. president, Pope Francis stated that he leaves it to Biden’s "conscience.”

"Let (Biden) talk to his pastor about that incoherence," the pope said.

Though a Catholic, Biden has repeatedly supported abortion rights despite the Church’s teaching that human life must be respected and protected from the moment of conception.

Last week Biden signed an executive order aimed at protecting abortion access in response to the Supreme Court’s decision to overturn Roe v. Wade, which legalized abortion throughout the U.S.

The president called it “a moment to restore the rights that have been taken away from us, and the moment to protect our nation from an extremist agenda that is antithetical to everything we believe as Americans.”

In September 2021, Biden said he did not “agree” that life begins at conception.

"I have been and continue to be a strong supporter of Roe v. Wade,” he said at the White House, answering a reporter’s question on abortion. “I respect them — those who believe life begins at the moment of conception and all — I respect that. Don't agree, but I respect that,” he said.

Cardinal Wilton Gregory of Washington commented shortly afterward that “The Catholic Church teaches, and has taught, that life — human life — begins at conception. So, the president is not demonstrating Catholic teaching.”

Gregory told a journalist in November 2020 that he would not deny Communion to a politician who supported the codification of legal abortion in federal law and the taxpayer funding of abortion. Biden supports both policies.

In June 2021, the parish council of the president’s Washington, D.C. parish, Holy Trinity, stated its agreement with Gregory “concerning the issues surrounding offering the Eucharist to American politicians.”

“Holy Trinity Catholic Church will not deny the Eucharist to persons presenting themselves to receive it,” the statement said.

“As a parish which has a long history of welcoming all, we concur with and support the pastoral approach of our Archbishop.” The Catholic Church in Australia has concluded its Fifth Plenary Council. After months of debate and discussion on Church governance and pastoral priorities, Archbishop Timothy Costelloe of Perth declared the council closed on Saturday.