Pope Francis: Canada visit will be a ‘penitential pilgrimage’ 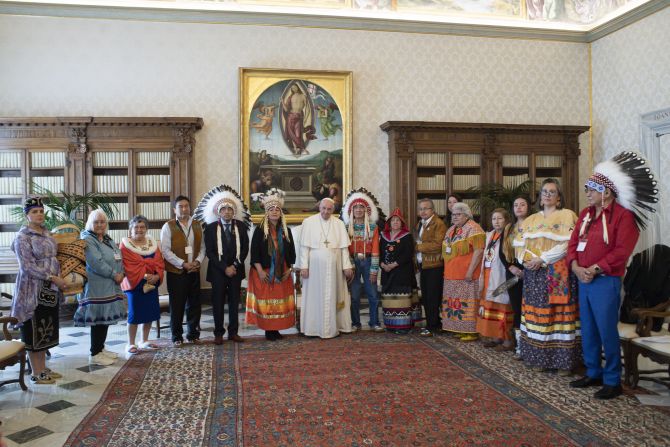 Pope Francis meets members of the First Nations at the Vatican on March 31, 2022. | Vatican Media

The papal trip to Canada next week will be a “penitential pilgrimage” to bring healing and reconciliation, Pope Francis said Sunday.

The pope is scheduled to travel to the Canadian cities of Edmonton, Quebec City, and Iqaluit from July 24-29. There he will meet members of Canadian indigenous groups, residential school abuse survivors, and Catholics.

“Next Sunday, God willing, I will leave for Canada; therefore, I wish now to address all the people of that country,” Francis said after the Angelus on July 17.

“As you know,” he said, “I will come among you especially in the name of Jesus to meet and embrace the indigenous peoples.”

He thanked all those who are preparing the trip and asked for prayers.

“I am about to make a penitential pilgrimage,” he said, “which I hope, with God’s grace, will contribute to the journey of healing and reconciliation already undertaken.”

The pope recalled his private meetings with representatives of the Métis, Inuit, and First Nations peoples at the Vatican at the end of March and beginning of April, and the sorrow and solidarity he expressed for the harm they have suffered.

“Unfortunately, in Canada, many Christians, including some members of religious institutes, have contributed to the policies of cultural assimilation that, in the past, have severely harmed native communities in various ways,” he said.

Pope Francis is expected to issue an apology in Canada on behalf of the Catholic Church for the abuses committed against indigenous students in Catholic-run residential schools.

The Canadian bishops said last year that they would welcome Francis’ visit as a “pilgrimage of healing and reconciliation.”

The 85-year-old pope was also scheduled to visit the Democratic Republic of Congo and South Sudan July 2-7, but postponed the trip “at the request of his doctors.”

He has been suffering from a knee injury for several months.

The decision to postpone the Africa trip came after doctors said he needed 20 more days of therapy and rest for his knee before he travels to Canada.

In an interview with Reuters at the beginning of July, Francis said the fracture was “slowly getting better” with the help of laser and magnet therapy.