Pope Francis: Complaining that the world is evil is ‘not Christian’ 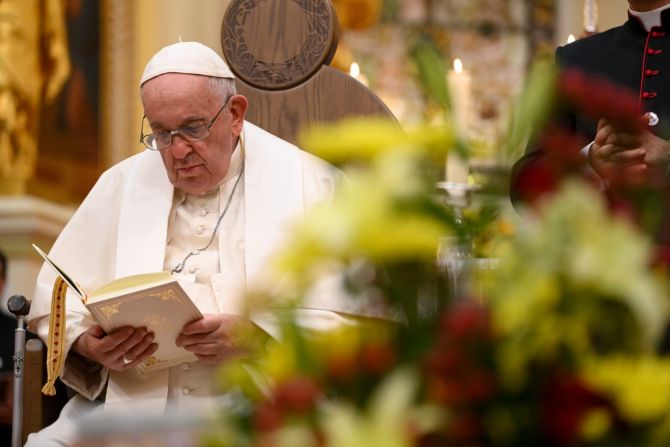 Pope Francis reads during the Vespers service on July 28, 2022, at the Cathedral Basilica of Notre-Dame de Québec in Québec, Canada. | Vatican Media

Speaking Thursday to a group of priests, bishops, deacons, consecrated persons, seminarians, and pastoral workers at the Cathedral Basilica of Notre-Dame de Québec, Pope Francis urged those present to model Christian joy and fraternity to those to whom they minister.

“Christian joy is about the experience of a peace that remains in our hearts, even when we are pelted by trials and afflictions, for then we know that we are not alone, but accompanied by a God who is not indifferent to our lot. When seas are rough: The storm is always on the surface but the depths remain calm and peaceful. That is also true of Christian joy: It is a free gift, the certainty of knowing that we are loved, sustained and embraced by Christ in every situation in life,” the pope said in his homily as part of a Vespers service at the cathedral.

The pope noted that the first Bishop of Québec, St. François de Laval, opened a seminary in 1663 and devoted his entire ministry to the formation of priests.

“Dear brothers and sisters, the Gospel needs to be proclaimed if we are to communicate the joy of faith to today’s men and women,” the pope said. “Yet this proclamation is not primarily a matter of words, but of a witness abounding with gratuitous love, for that is God’s way with us. A proclamation that should take shape in a personal and ecclesial lifestyle that can rekindle a desire for the Lord, instill hope, and radiate trust and credibility.”

Pope Francis spoke about contemporary challenges to the faith, including the concept of secularization, which he described as “relegating God, as it were, to the background.” He warned, however, that “we must be careful not to fall prey to pessimism or resentment, passing immediately to negative judgments or a vain nostalgia.”

“Bitterly” complaining that “the world is evil; sin reigns” is “not Christian,” the Holy Father asserted.

“We are called, instead, to have a view similar to that of God, who discerns what is good and persistently seeks it, sees it and nurtures it,” the pope preached.

“If we yield to the negative view and judge matters superficially, we risk sending the wrong message, as though the criticism of secularization masks on our part the nostalgia for a sacralized world, a bygone society in which the Church and her ministers had greater power and social relevance,” Pope Francis said.

“And this is a mistaken way of seeing things … secularization demands that we reflect on the changes in society that have influenced the way in which people think about and organize their lives,” he continued. “If we consider this aspect of the question, we come to realize that what is in crisis is not the faith, but some of the forms and ways in which we present it.”

Three challenges in a secular age

The pope offered three “challenges” to the pastoral workers that he said can shape their prayer and pastoral service in a world shaped by secularization.

The first challenge the pope cited is to “make Jesus known,” proclaiming him in a similar way to the apostles in the Book of Acts, through “a pastoral creativity capable of reaching people where they are living, finding opportunities for listening, dialogue and encounter.”

The second challenge he offered is “witness.” In this part of his speech, Pope Francis again acknowledged and apologized for the abuses suffered by indigenous students at church-run residential schools in Canada.

“The Gospel is preached effectively when life itself speaks and reveals the freedom that sets others free, the compassion that asks for nothing in return, the mercy that silently speaks of Christ,” Pope Francis said.

“The Church in Canada has set out on a new path, after being hurt and devastated by the evil perpetrated by some of its sons and daughters,” the pope observed.

“I think in particular of the sexual abuse of minors and vulnerable people, scandals that require firm action and an irreversible commitment. Together with you, I would like once more to ask forgiveness of all the victims. The pain and the shame we feel must become an occasion for conversion: Never again!” he said.

“And thinking about the process of healing and reconciliation with our indigenous brothers and sisters, never again can the Christian community allow itself to be infected by the idea that one culture is superior to others, or that it is legitimate to employ ways of coercing others,” he vowed.

“Let us recover the zeal of your first Bishop, St. François de Laval, who railed against those who demeaned the indigenous people by inducing them to imbibe strong drink in order then to cheat them,” the pope said. “Let us not allow any ideology to alienate or mislead the customs and ways of life of our peoples, as a means of subduing them or controlling them.”

The third challenge he offered is “fraternity.” The pope encouraged the pastoral men and women to examine how they are doing in terms of building “relationships of fraternity with everyone.”

“Are we brothers, or competitors split into parties? And how about our relationships with those who are not ‘one of our own,’ with those who do not believe, with those who have different traditions and customs? This is the way: to build relationships of fraternity with everyone, with indigenous brothers and sisters, with every sister and brother we meet, because the presence of God is reflected in each of their faces.”

The pope spoke following an introduction and welcome from Raymond Poisson, Bishop of St-Jérôme-Mont-Laurier. The pope received a standing ovation after his homily.

Afterward, the Cardinal Archbishop of Québec, Gérald Lacroix, accompanied the pope to the tomb of St. Francis de Laval, where they prayed silently.

Continuing what he has called a “penitential pilgrimage” in Canada, Pope Francis is set to fly north on Friday, July 29, to Iqaluit, to meet privately with students of the former residential schools. He will return to Rome the same day, arriving on Saturday, July 30. Pope Francis’ Canada trip: What is Iqaluit and why is he going there?

Pope Francis is set to fly to Iqaluit, Canada, on July 29, the last stop of his “penitential pilgrimage” to Canada. At a July 28 Mass in the historic Basilica of Sainte-Anne-de-Beaupré in Québec, Pope Francis preached on the hope and redemption that Christ offers in the face of shame.