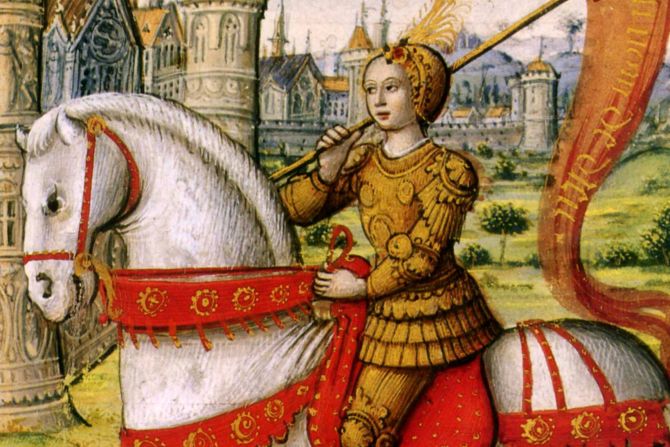 Joan of Arc depicted on horseback in an illustration from a 1504 manuscript. | Wiki Commons

Visited by St. Michael the Archangel and commissioned by God at the age of 13 to lead the army of France and bring an end to the bloodiest war in European history up to that point, Joan of Arc seems more legend than history.

Here are some of the questions people ask about the Maid of Orléans:

Who was Joan of Arc and what did she do? When and where did she live?

Joan of Arc was a young French peasant, born in 1412, 90 years into the Hundred Years’ War, in the small village of Domremy in eastern France. Destined to save the French from English incursion, she was burnt at the stake in 1431 at the age of 19 after a corrupt Church trial found her guilty of heresy. The trial would later be nullified by the Church and 500 years later, in 1920, Joan of Arc was declared a saint by Pope Benedict XV.

Did Joan of Arc hear voices?

At the age of 13, Joan of Arc had locutions — an interior, mystical phenomenon that involves hearing a divine voice — and reportedly heard the voices of St. Michael the Archangel, St. Margaret of Antioch, and St. Catherine of Alexandria. These three informed her of a special mission given her by God to crown the rightful king of France and thereby end the dynastic dispute that undergirded the Hundred Years’ War.

Along the way, she convinced lords, soldiers, and the French heir to the throne, Charles VII, of her mission. After a lengthy interrogation, she was given charge of the army and successfully lifted the siege of Orléans — on which the fate of the entire war hung — and then freed several towns along the route to crowning Charles VII in the cathedral of Rheims.

Is the story of Joan of Arc a true story?

The story of Joan of Arc is true and historically documented. For this reason, she is among the most famous heroines of history. The task given her by God was so exceptional that it would lead atheist Mark Twain, who wrote a book on her life, to earnestly but exaggeratedly call her “by far the most extraordinary person the human race has ever produced.”

Was Joan of Arc a knight?

Joan of Arc was neither a knight nor a trained soldier, but when she mounted a horse for the first time she was so natural on it that the Duke of Lorraine gifted it to her.

Who were Joan of Arc's parents?

Joan of Arc’s parents were simple peasants, Jacque d’Arc and Isabel Romée. They were farmers and owned sheep, which Joan of Arc tended in her youth.

Did Joan of Arc have any siblings? Does she have any living descendants?

Joan of Arc had three brothers named Jacquemin, Pierre, and Jean, and one sister, Catherine. Both Pierre and Jean accompanied Joan in her quest and fought alongside her.

While Joan of Arc did not have descendants, her entire family was elevated to nobility after Charles VII was crowned, and her village dispensed from paying taxes for three hundred years by the crown.

What was Joan of Arc's nickname?

Joan of Arc’s nickname was “La Pucelle” or the Maid, in reference to an old French prophecy that held that a virgin from Lorraine would save the people of France after an immoral woman, later held to be Isabella of Bavaria, jeopardized the crown.

Could Joan of Arc read and write?

Joan of Arc could neither read nor write, and she did not know how to wield a sword before she began her mission. This makes her military success, where hardened commanders failed, even more extraordinary — an act of God as the people saw it.

How did Joan of Arc die?

Joan of Arc was executed by the Catholic Church after a sham trial condemned her of relapsed heresy. The trial was conducted by Church authorities sympathetic to the English, who hoped to see her claims of heavenly assistance to end the war with a French king on the throne discredited. Convicted of heresy, she was taken to the stake to be burned, at which point, under penalty of death, she signed a paper renouncing her visions and agreeing never to wear men’s clothing. Four days later, Joan of Arc confessed to being afraid of her death, said that the visions were true, and donned men’s clothing once again, all of which constituted her supposed relapse to heresy. She was burned at the stake, clutching a crucifix to her body and proclaiming the name “Jesus” as she died, prompting an onlooker to say, “We have burned a saint.”

Where is Joan of Arc buried?

Joan of Arc’s body was incinerated at the stake, but her heart remained intact after her execution. The soldiers threw the heart in the Seine River so that no one would be able to venerate her remains.

Joan of Arc scholar Regine Pernoud noted that Joan of Arc was barely over five feet tall, based upon a robe ordered for Joan during her imprisonment by the Duke of Orléans.

How did Joan of Arc change the world and become a saint?

Joan of Arc was not canonized for her ability to free the French from English domination, but for her heroic dedication to the will of God and personal holiness. While Joan commanded the army of France, she drove prostitutes from camp, refused to allow soldiers to rape and pillage the towns that gave them entrance, encouraged confession before battle, and sharply reduced the cussing and oath-swearing of the men under her charge.

She remained committed to a life of contemplation and prayer amid the battles she oversaw, never once lifting her sword against anyone save to chase out a prostitute. Her faith and insights became evident at her trial, forming the foundation of several summaries of theology in the Catechism of the Catholic Church, and her confidence in Jesus and the Catholic Church remained unshaken, even after being wrongly condemned to death by the Church.

What is Joan of Arc the patron saint of?

Joan of Arc is the patron saint of France, soldiers, prisoners, those in need of courage, those ridiculed for their faith, and youth, among other things.

When is Joan of Arc's feast day?