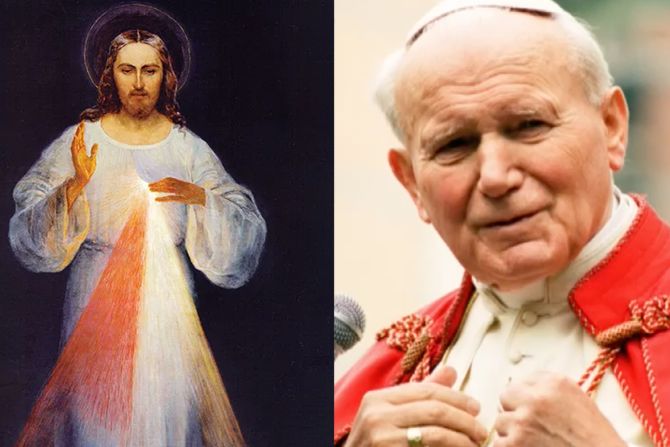 Standing before the image of Divine Mercy, the pope said, “I wish solemnly to entrust the world to Divine Mercy. I do so with the burning desire that the message of God’s merciful love, proclaimed here through Saint Faustina, may be made known to all the peoples of the earth and fill their hearts with hope.”

He finished his homily with this prayer:

in your Son, Jesus Christ, you have revealed your love

and poured it out upon us in the Holy Spirit, the Comforter,

We entrust to you today the destiny of the world and of every man and woman.

Bend down to us sinners,

and grant that all the peoples of the earth

may experience your mercy.

In You, the Triune God,

may they ever find the source of hope.

by the Passion and Resurrection of your Son,

have mercy on us and upon the whole world!

The consecration and entrustment of the world to Divine Mercy represented the fulfillment of a mission for Maria Faustina Kowalska (1905-1938). Faustina, a poor, young Polish nun experienced visions of Jesus in which he asked her to make his message of infinite love and mercy known to the world. At the request of her spiritual director, she made a record of the visions in her diary.

In his visitations, Jesus asked her to have a painting made portraying him as he appeared to her. In her diary she recorded the vision:

“Paint an image according to the pattern you see, with the signature: ‘Jesus, I trust in You.’ I desire that this image be venerated, first in your chapel, and then throughout the world. I promise that the soul that will venerate this image will not perish.”

In another visitation, he asked the nun that she help establish Divine Mercy Sunday on the first Sunday after Easter, to offer the world salvation.

Faustina recorded Jesus’ words: “This Feast emerged from the very depths of My mercy, and it is confirmed in the vast depths of my tender mercies. Every soul believing and trusting in My mercy will obtain it.”

It was the mission that Pope John Paul II also felt called to help complete.

If St. Faustina was the initial receptacle for the message of Divine Mercy, her Polish compatriot saw to it that the requests Jesus made of the nun were fulfilled, and the devotion spread throughout the world.

As a young seminarian in Krakow in 1940, Karol Wojtyla first learned of St. Faustina’s revelations and the message of Divine Mercy. Later as a priest, he was a frequent visitor to the convent where Faustina lived, stopping by to pray, and hold retreats. When he became Archbishop of Krakow, he led the effort to put Faustina’s name before the Congregation for the Causes of Saints and defended her when the validity of her claims was questioned in Rome.

As pope, he published his second encyclical, Dives in misericordia (Rich in mercy), on Nov. 30, 1980.

The following year, while recovering from an assassination attempt, Pope John Paul II traveled to The Shrine of Merciful Love in Collevalenza, Italy, where he revealed that he felt spreading the message of Divine mercy to be his greatest calling.

”Right from the beginning of my ministry in St. Peter's See in Rome, I considered this message my special task. Providence has assigned it to me in the present situation of man, the Church, and the world. It could be said that precisely this situation assigned that message to me as my task before God,” he said.

At the beatification of Saint Faustina on April 18, 1993, the pope spoke of his delight at witnessing the popularity of the devotion to Divine Mercy.

“Her mission continues and is yielding astonishing fruit. It is truly marvelous how her devotion to the merciful Jesus is spreading in our contemporary world and gaining so many human hearts!” said the pope.

Twenty years ago today, when Pope John Paul II entrusted the world to Divine Mercy, he shared his hope that the world would hear the message that God is merciful. Quoting from Faustina's diary, he said:

“May this message radiate from this place to our beloved homeland and throughout the world. May the binding promise of the Lord Jesus be fulfilled: from here there must go forth ‘the spark which will prepare the world for his final coming (cf. Diary, 1732)’.”

“This spark needs to be lighted by the grace of God. This fire of mercy needs to be passed on to the world. In the mercy of God the world will find peace and mankind will find happiness! I entrust this task to you, dear Brothers and Sisters, to the Church in Kraków and Poland, and to all the votaries of Divine Mercy who will come here from Poland and from throughout the world. May you be witnesses to mercy!” he said.

Today, devotion to Divine Mercy is popular among Catholics around the world. Churches and shrines and religious orders have dedicated themselves to sharing the message received by St. Faustina and which St. Pope John Paul II considered his “task before God." A Vatican archbishop celebrated the 90th anniversary of the first Divine Mercy apparition on Monday in the Polish city of Płock. Pope Francis explained three ways that God's mercy should bring about peace in the lives of Christians.