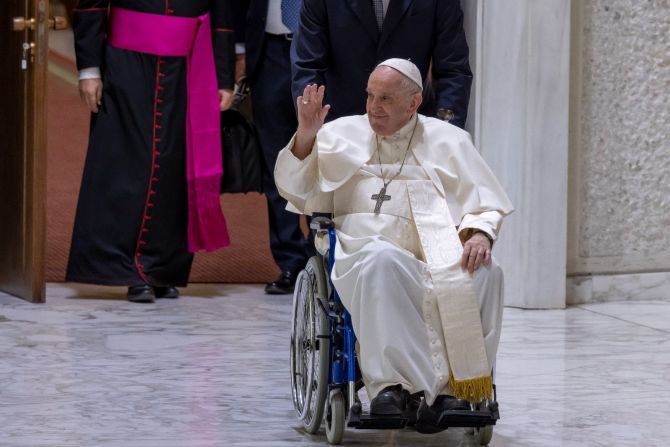 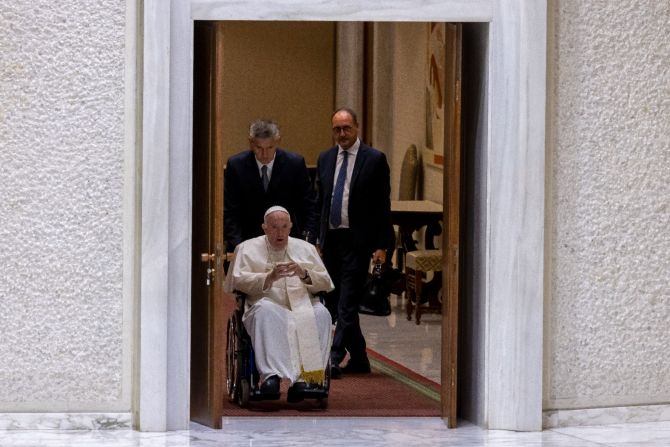 Pope Francis arriving at the general audience in the Vatican on Aug. 24, 2022 | Pablo Esparza / CNA 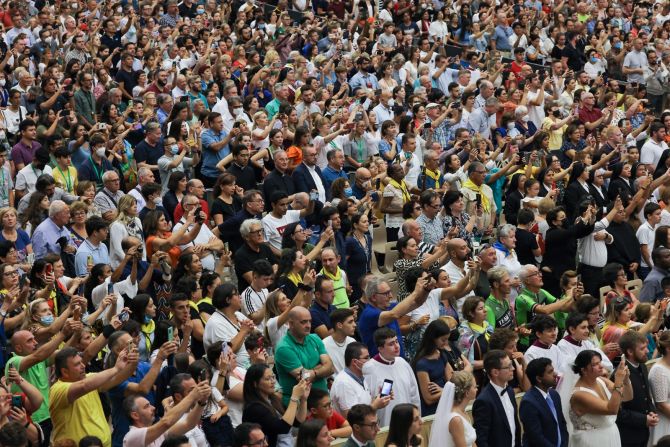 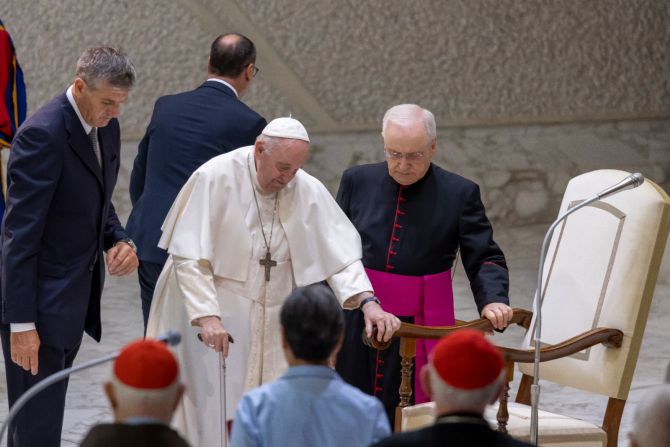 Pope Francis moving from his wheelchair to his seat at the general audience, Aug. 24, 2022 | Pablo Esparza / CNA 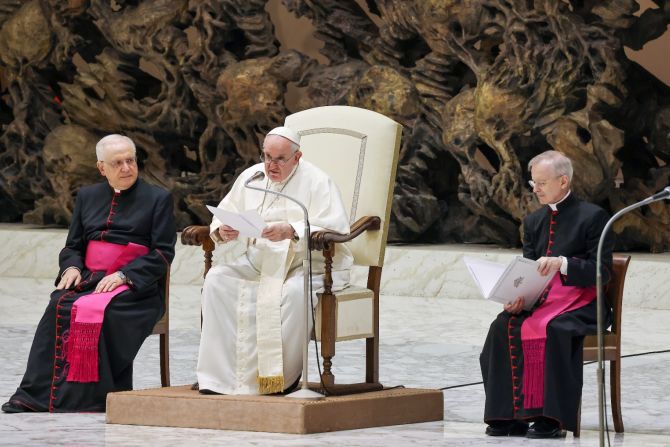 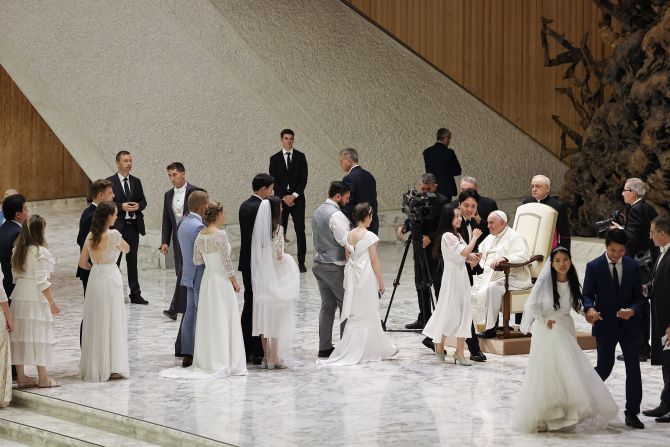 Pope Francis with newlywed couples at the Vatican on Aug. 24, 2022 | Pablo Esparza / CNA

Reflecting on the Virgin Mary’s bodily Assumption into heaven, he recalled the hope Christians have in the resurrection of their own body at the end of time.

“We recently celebrated the Assumption into heaven of the Mother of Jesus. This mystery illuminates the fulfillment of the grace that shaped Mary’s destiny, and it also illuminates our destination,” he said at the Vatican on Aug. 24. “Our destination is heaven.”

The pope gave his weekly public audience in the Paul VI hall, where he noted that it would be his final catechesis on the theme of old age.

The 85-year-old pope, who has been experiencing difficulty walking, was brought onto the auditorium’s stage in a wheelchair. He remained seated throughout the hour-long event.

The audience began with a reading from Saint Paul’s Letter to the Romans 8:22-24: “We know that all creation is groaning in labor pains even until now; and not only that, but we ourselves, who have the firstfruits of the Spirit, we also groan within ourselves as we wait for adoption, the redemption of our bodies. For in hope we were saved. Now hope that sees for itself is not hope. For who hopes for what one sees?”

“It is no coincidence,” Francis said, “that the Apostle Paul speaks of the pains of childbirth.”

“Just as, in the moment we come out of our mother’s womb, we are still us, the same human being who was in the womb; so, after death, we are born to heaven, to God’s space, and we are still ourselves, who have walked on this earth,” he said.

Pope Francis also recalled Jesus’ promise to his disciples before he left the earth: “And if I go and prepare a place for you, I will come again and will take you to myself, that where I am you may be also (John 14:3).”

“The Risen One lives in God’s world, where there is a place for everyone, where a new earth is being formed and the heavenly city, man’s final dwelling place, is being built,” he said. “We cannot imagine this transfiguration of our mortal corporeality, but we are certain that it will keep our faces recognizable and allow us to remain human in God’s heaven.”

“It will allow us to participate, with sublime emotion, in the infinite and blissful exuberance of God’s creative act, whose endless adventures we will experience firsthand,” he added.

Francis explained that when Jesus speaks about the Kingdom of God, he describes it as a wedding feast, as a party with friends; and the pope urged everyone to take Jesus’ words about the Kingdom seriously, keeping in mind the eternal “destination” of their earthly lives.

“In our old age, my dear contemporaries — I’m speaking to the old men and women — the importance of the many ‘details’ of which life is made — a caress, a smile, a gesture, an appreciated effort, an unexpected surprise, a hospitable cheerfulness, a faithful bond — becomes more acute,” he said.

“The essentials of life, which we hold most dear as we approach our farewell, become definitively clear to us.”

“The best of life is yet to come,” he said, addressing the elderly.

“Our whole life appears like a seed that will have to be buried so that its flower and its fruit can be born. It will be born, along with everything else in the world,” he continued. “Not without labor pains, not without pain, but it will be born.”

“And the life of the risen body will be a hundred and a thousand times more alive than we have tasted it on this earth.” Priests confront dictatorship in Nicaragua: ‘Let us work in peace!’

The priests of the Diocese of Estelí in Nicaragua called on the authorities of the dictatorial regime of Daniel Ortega to convert and to release their apostolic administrator and bishop of Matagalpa, Rolando José Álvarez Lagos.

Father Stu Long, the Montana boxer-turned-priest known for his dramatic conversion, is the only finalist not alive today.