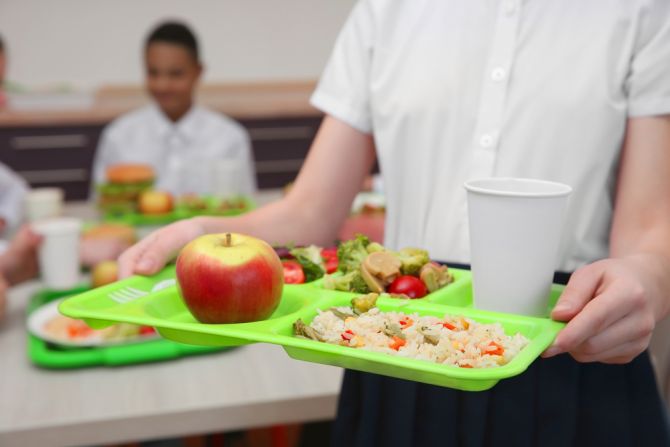 The U.S. Department of Agriculture has reversed a policy that would have required Catholic schools that participate in a federal free lunch program to comply with the Biden administration’s LGBTQ mandates.

Nevertheless, some Catholic schools, such as those of the Archdiocese of St. Louis, are choosing to drop out of the program.

Earlier this year the Biden administration re-interpreted Title IX's federal ban on sex discrimination to include “sexual orientation or gender identity.” Religious freedom and free speech advocates warn that the change could be used to enforce mandates on hiring, bathrooms, using preferred pronouns, and dress codes.

The broadened definition also applies to the National School Lunch Program, a federally funded meal assistance program administered by the Department of Agriculture that provides subsidized or free lunches to more than 30 million public and private school students from low-income households.

On Aug. 12, the department published a memo saying that although the rule applies to most public and private schools across the country, it includes an exception for schools to “be exempt on religious grounds if there is a conflict between Title IX and a school’s governing religious tenets.”

The memo states that the Title IX regulations “do not require a religious educational institution to submit a written request for a Title IX exemption in order to claim that exemption.”

The guidance also adds that schools wishing to receive “assurance” of their religious exemptions can submit a written request to the USDA’s Office of the Assistant Secretary for Civil Rights.

Earlier this month, CNA reported that Catholic schools who participate in the federally-funded NSLP were threatened by the Biden administration’s revised rule.

At the time, a private Christian school in Tampa, Florida, had to file a lawsuit against the administration in order to secure a religious exemption from the rule, which could have forced the school to comply with policies on bathrooms, pronouns, hiring, and dress codes.

Represented by ADF, the school was granted an exemption by the state’s agricultural department, restoring the funds for its school lunch program.

Erica Steinmiller-Perdomo, legal counsel at ADF, told CNA in an email that it took a lawsuit for the administration to backtrack on forcing religious schools to comply with its “radical push to redefine what it means to be male or female in federal law.”

“After ADF’s lawsuit, USDA made clear that they will automatically respect religious exemptions under Title IX for religious schools—for now,” Steinmiller-Perdomo said.

“But public schools, charter schools, and secular private schools are not protected and remain under threat. Plus, other federal laws that lack religious exemptions may also apply. As long as the Biden Administration seeks to redefine what it means to be male or female in all federal laws, religious schools risk being punished just for maintaining Christian beliefs,” she added.

Fifty-two percent of U.S. Catholic schools participate in the federal lunch program, according to the National Catholic Educational Association.

Despite the USDA’s clarification, the Archdiocese of St. Louis released a private memo on Aug. 16 telling archdiocesan schools to drop out of the lunch program.

Brecht Mulvihill, the archdiocese’s executive director of communications, told CNA in an email that the archdiocese decided not to participate in both the NSLP and the similar USDA Special Milk Program.

“As with any federal subsidy, schools that participate in these programs are subject to a wide variety of federal mandates, which could ultimately impact decisions concerning admissions, extracurricular activities, facilities, and logistics,” Mulvihill wrote, adding: “In some circumstances, these mandates would impede a school’s ability to faithfully carry out the teachings of the Catholic Church.”

There are around one dozen archdiocesan elementary and high schools that have participated in the programs in the past that will be affected.

“The Archdiocese of St. Louis is working to provide similar meal service or reduced-cost options on which our students and their families rely. In the meantime, there will be no interruption of these important services,” Mulvihill said.

When CNA asked if the USDA’s reinstatement of the broad religious exemption would change the archdiocese’s decision to withdraw from the program, Mulvihill responded that “accepting any federal subsidy would subject archdiocesan schools to federal mandates that could impede a school’s ability to faithfully carry out the teachings of the Catholic Church. Our decision to withdraw from these programs is not due to one specific rule, law, or mandate.”

A USDA official told CNA Aug. 30 that although the Title IX regulations apply to a “wide array” of schools, the law includes some exceptions, “including one permitting an institution to be exempt on religious grounds if there is a conflict between Title IX and a school’s governing religious tenets.”

The spokesperson said that “USDA regulations do not require a religious educational institution to submit a written request for a Title IX exemption in order to claim that exemption,” adding: “USDA’s recent guidance is meant to clarify this process.”

The official also said that the department works with all of its partners to “ensure that the applicable laws against discrimination are properly understood and implemented.”

“We do not tolerate discrimination of any kind,” the spokesperson added.