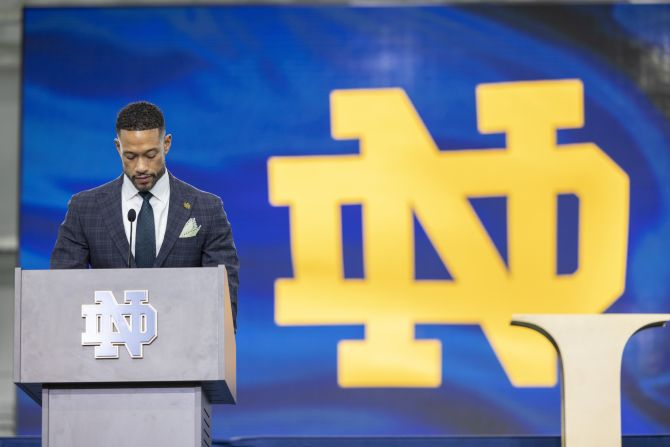 Marcus Freeman, head coach of the University of Notre Dame’s football team, told members of the press Sept. 15 that he had tried to keep his recent conversion to the Catholic faith under wraps.

The news that he had become a Catholic was made public after his home parish, St. Pius X Catholic Church in Granger, Indiana, published an announcement welcoming Freeman into the Church in its parish bulletin.

“I tried to keep it as private as I could,” Freeman said.

“Obviously, when you’re head coach at Notre Dame, nothing is private,” he added with a smile.

“Welcome to our newest Catholic, Marcus Freeman,” read the announcement in the church’s Sept. 11 parish bulletin.

Freeman was “received into the Catholic Church after preparing with Father Nate Wills, C.S.C., chaplain of the Notre Dame football team,” the bulletin announced. It was accompanied by a photo of the 36-year-old football coach and four priests, including Father John Jenkins, C.S.C., the university’s president.