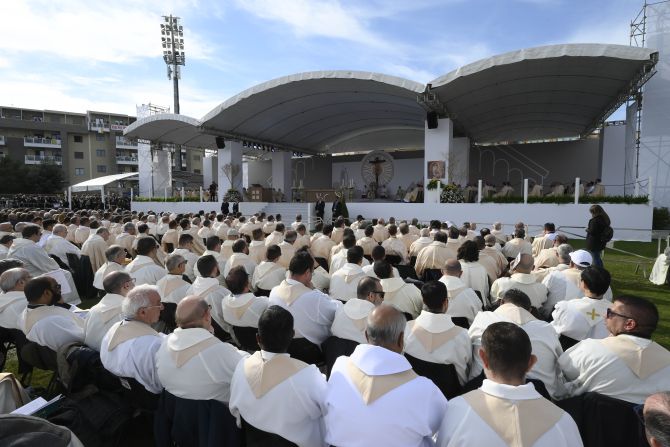 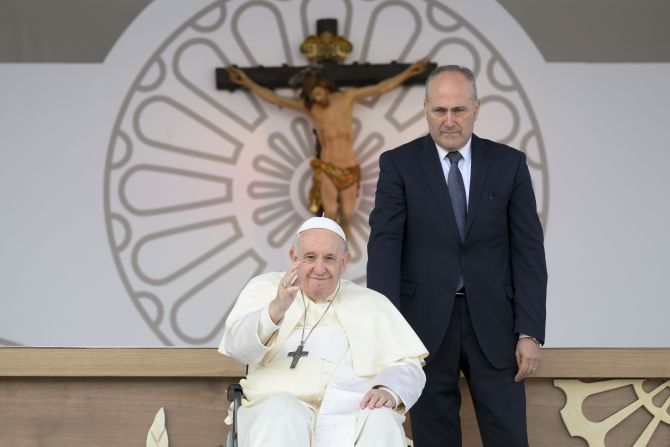 Pope Francis on Sunday traveled to the ancient Italian city of Matera, where he urged thousands of people gathered in a soccer stadium for Sunday Mass to “rediscover” Eucharistic adoration.

“Brothers, sisters, from the city of Matera, this ‘city of bread,’ I would like to tell you: Let us return to Jesus. Let us return to the Eucharist,” Pope Francis said in his homily on Sept. 25.

“Let us return to the taste of bread because while we are hungry for love and hope, or we are broken by the travails and sufferings of life, Jesus becomes food that feeds us and heals us.”

Matera, one of the oldest continuously inhabited cities in the world known for its ancient cave dwellings, is also called the “city of bread” due to its traditional sourdough recipe that has been passed down over centuries.

The ancient “city of bread” hosted Italy’s National Eucharist Congress from Sept. 23 to 25. More than 80 bishops and hundreds of delegates from across Italy participated in the congress with the theme “Let us return to the taste of the bread: For a Eucharistic and Synodal Church.”

Pope Francis flew early Sunday morning to the southern Italian city to offer the closing Mass for the congress. He departed by plane rather than by helicopter as scheduled due to stormy weather conditions in Rome and arrived to a warm welcome in Matera as his popemobile passed through a cheering crowd.

He said that the Eucharist presents each person with a challenge: “to adore God and not ourselves, putting him at the center rather than the vanity of self.”

“When we adore the Lord Jesus present in the Eucharist, we receive a new outlook on our lives as well: I am not the things I possess or the successes I can achieve. The value of my life does not depend on how much I can show off nor does it diminish when I encounter failures and setbacks. I am a beloved child, each of us is a beloved child. I am blessed by God. He wants to clothe me with beauty and free me from all slavery,” Francis said.

“Let us remember this: whoever worships God does not become a slave to anyone. They are free. Let us rediscover the prayer of adoration, a prayer that is frequently forgotten. Adoration … frees us and restores us to our dignity as children, not slaves.”

Prisoners in Italy helped to make the eucharistic hosts offered during Communion at the Mass as part of an initiative of the Italian prison chaplains’ association. The wine offered at Communion was made from vines cultivated by refugees and migrants who work at the House of Dignity vineyards.

At the end of the Mass, Pope Francis prayed the Angelus prayer and recalled that Sept. 25 marks the 108th World Day of Migrants and Refugees, celebrated annually on the last Sunday in September.

The pope said: “Let us renew our commitment to building the future in accordance with God’s plan: a future in which every person may find his or her place and be respected; in which migrants, refugees, displaced persons, and the victims of human trafficking may live in peace and with dignity.”

Pope Francis then prayed for peace in Ukraine and in Myanmar, where an air attack on a school earlier this week killed 11 children.

“May the cry of these little ones not go unheard! These tragedies must not happen,” he said.

The pope also appealed for the release of five priests and a religious sister who were kidnapped in Cameroon.

After praying the Angelus, the pope paused in silence in front of an icon of Mary from his wheelchair. The pope, who has struggled with an injury to his knee in recent months, stood up on his own at some points in the liturgy, including to offer the opening prayer.

Cardinal Matteo Maria Zuppi of Bologna, the president of the Italian bishops’ conference, served as the primary celebrant for the Liturgy of the Eucharist. Pope Francis could be seen seated behind him speaking the words of the Eucharistic Prayer with his hand extended.

Pope Francis made back-to-back pastoral visits this weekend to the Italian cities of Assisi and Matera. In Assisi, the pope spoke to participants in the Economy of Francesco conference for young economists, entrepreneurs, and researchers.

After the Mass in Matera, the pope blessed a new soup kitchen for the poor connected with the local parish Church of the Annunciation.

“Today, together, we recognize that the Eucharist is a prophecy of a new world,” Pope Francis said in his homily.

“It is the presence of Jesus who asks us to commit ourselves so that an effective conversion occurs: from indifference to compassion, from waste to sharing, from selfishness to love, from individualism to fraternity.” “Look at the youth suicide rate, how it has gone up,” Pope Francis said.