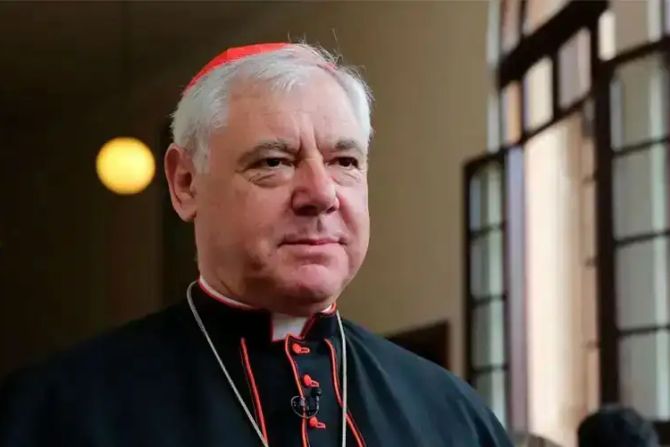 German Cardinal Gerhard Müller, prefect emeritus of the Congregation for the Doctrine of the Faith, warned of a grave danger that could lead to the “collective suicide” of humanity.

“Christianity promotes a civilization of life and challenges the culture of anthropological nihilism, which would have to end in the collective suicide of humanity. Atheism is nihilism. Its fruit is death,” the cardinal said in a presentation given in Spanish by his secretary Sept. 30 at the 14th World Congress of Families, which took place Sept. 30–Oct. 2 in Mexico.

On its website, the congress states it is “a major international and interreligious event that seeks to unite and equip leaders, organizations, and families to affirm, celebrate, and strengthen the family as the natural and fundamental human environment, key to the flourishing of mature individuals and sustainable societies.”

In his lecture, Müller explained that “nihilism, that is, ‘the feeling of the new age’ that ‘God himself is dead,’” as the philosopher Hegel wrote, can lead to the feeling that “there is nothing bad in the human being and everything that pleases him is allowed, if we believe in the kindly divine rationality over and in all that has being in his creation.”

In his discourse titled “Man made in the image and likeness of God: a manifesto against anthropological nihilism,” the cardinal referred to the theses of Nietzsche, “the prophet of post-Christian nihilism” who proclaimed “the death of God”; and to the historian Yuval Noah Harari, who “has become something like the guru of the so-called trans- and post-humanism.”

The prefect emeritus explained that “as a historian, Harari himself should know how quickly the vision of a divine superman can become diabolically inhuman. The 20th century has cruelly demonstrated this. In Western and Eastern Europe. Especially in Germany and Russia.”

“If man ceases to be a creature in the image and likeness of the triune God, he sinks into the depths of anthropological nihilism,” Müller warned.

For example, the cardinal referred to people “who have had their face or other parts of their body ‘lifted’ or ‘updated.’ It’s no longer a Hollywood fashion, but rather that these poor creatures deserving of mercy have fallen — without knowing it — into anthropological nihilism.”

“Anthropological nihilism has as its father the pride of the creature that wants to become like God (Genesis 3:5) and wants to establish the difference between good and evil, true and false for itself,” he said.

Its source of motivation, the German cardinal continued, “is the blind madness of the impious, who exchange the ‘glory of the incorruptible God’ for their self-fabricated ideological images. When man worships the creation instead of the Creator, he loses the glory of the sons and friends of God.”

Hostile to life and marriage

The cardinal warned that anthropological nihilism “is significantly hostile to life,” since it encourages the act of “killing children in the womb as a human right and the utilitarian requirement of the so-called ‘merciful death’ (euthanasia) for ‘depleted’ or ‘no longer utilizable’ human beings.”

“But the rotten fruits of anthropological nihilism are also shown in the questioning of marriage between man and woman, which is seen as a variant among any number of possibilities of the orgiastic enjoyment of sexual satisfaction without the full surrender in love and without transcendending oneself to (form) a third person, namely, the child as the fruit of love and of the womb of its parents,” he continued.

Thus the relationship of marriage to fruitfulness is denied, “with which the Creator has blessed man and woman so that they transmit, preserve, and promote the life created by God.”

Cardinal Müller then addressed the issue of gender ideology, which makes a false distinction between biological sex and gender as a sociocultural construct.

“Apart from the biologically proven fact that a real sex change isn’t possible, the fiction of freely choosing one’s gender is a denial of God’s will for our person. Every human being exists in (his or her) bodily nature in either male or female expression,” he said.

“Gender ideology, which certainly also falls under the umbrella of anthropological nihilism, deprives both men and women of their own possibilities,” he pointed out.

“A man, by virtue of his spiritual and bodily disposition, has the possibility of becoming a loving husband to his wife and a faithful father to his children. But he cannot be a wife or mother to another person without betraying himself,” the cardinal said.

The prefect emeritus of the Congregation for the Doctrine of the Faith said that “no one can reform or modernize the teaching of Christ, ‘because he himself (by his Incarnation) brought with him all the newness and modernness to renew and vivify man,’” as St. Irenaeus of Lyons, who was recently declared a doctor of the church by Pope Francis, said.

Dangerous for the Church

“Anthropological nihilism becomes really dangerous for the Church when even Catholic theologians in key positions no longer assume the fact of the historically unique and insuperable revelation of God in Jesus Christ, but instead make a perverse compromise with post-humanism, just for the Church to ‘survive’ as a social organization in a modern world without God,” the cardinal said.

For this “theology without God,” then, “the creation and the covenant, the Incarnation and sacrifice of Jesus on the cross and his bodily resurrection are only considered existential symbols of mythical quality.”

“If Christianity were just a collection of disparate views of the unknowable divine that spread over our theoretical understanding of the world and the practical way of coping with contingency, then it wouldn’t really be worth fighting, suffering, and dying for the truth of Christ,” Müller explained.

The German cardinal stressed that “our faith in the God and Father of Jesus Christ overcomes the culture of death and anthropological nihilism. Faith opens us to a culture of life in the love of the Triune God because we are freed from the ‘slavery of the transient to the freedom and glory of the children of God.’” Cardinal Müller sharply criticized the Synodal Way, saying it "was over before it even began," even if the initiators had not noticed it at the time.