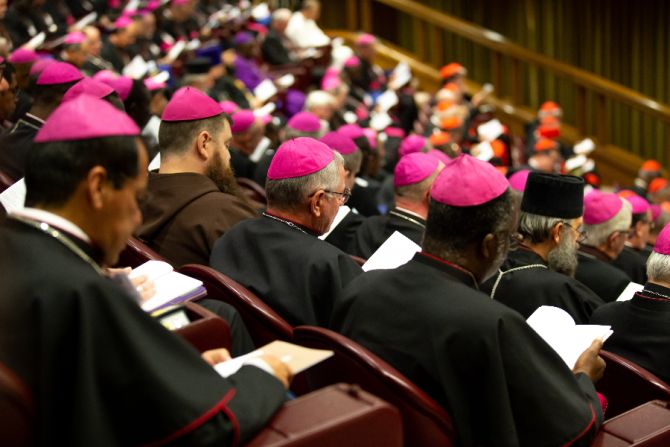 Titled “Enlarge the space of your tent,” the 44-page working document for the Synod on Synodality’s Continental Phase is meant to spark dialogue and arouse feedback.

“It is not a conclusive document because the process is far from being finished,” it says.

Catholic dioceses around the world have been asked to respond to the document by highlighting what intuitions resonate and what divergences emerge with the reality of the Church in their continent.

Here is what the document has to say about the ordination of women, LGBT inclusion, and the liturgy:

64: “After careful listening, many reports ask that the Church continue its discernment in relation to a range of specific questions: the active role of women in the governing structures of Church bodies, the possibility for women with adequate training to preach in parish settings, and a female diaconate. Much greater diversity of opinion was expressed on the subject of priestly ordination for women, which some reports call for, while others consider a closed issue.”

The document says that “almost all reports raise the issue of full and equal participation of women. … However, the reports do not agree on a single or complete response to the question of the vocation, inclusion and flourishing of women in Church and society.”

61: “The Church faces two related challenges: women remain the majority of those who attend liturgy and participate in activities, men a minority; yet most decision-making and governance roles are held by men. It is clear that the Church must find ways to attract men to a more active membership in the Church and to enable women to participate more fully at all levels of Church life.”

The document also quotes the Holy Land’s report: “In a Church where almost all decision-makers are men, there are few spaces where women can make their voices heard. Yet they are the backbone of Church communities, both because they represent the majority of the practicing members and because they are among the most active members of the Church.”

39. "Among those who ask for a more meaningful dialogue and a more welcoming space we also find those who, for various reasons, feel a tension between belonging to the Church and their own loving relationships, such as: remarried divorcees, single parents, people living in a polygamous marriage, LGBTQ people, etc."

The document also includes a quotation from the Southern African Catholic Bishops’ Conference report, which summarizes the challenge facing the synod of reducing many different views on Church teaching within a community into “a definitive community stance”:

“Southern Africa is also impacted by the international trends of secularization, individualization, and relativism. Issues such as the Church’s teaching on abortion, contraception, ordination of women,  married clergy, celibacy, divorce and remarriage, Holy Communion, homosexuality, LGBTQIA+ were raised up across the dioceses both rural and urban. There were of course differing views on these and it is not possible to give a definitive community stance on any of these issues.”

Polygamous marriages are mentioned twice in the document. Paragraph 94 said: “many summaries also give voice to the pain of not being able to access the Sacraments experienced by remarried divorcees and those who have entered into polygamous marriages.”

91. “Many reports strongly encourage the implementation of a synodal style of liturgical celebration that allows for the active participation of all the faithful in welcoming all differences, valuing all ministries, and recognizing all charisms. The synodal listening of the Churches records many issues to be addressed in this direction: from rethinking a liturgy too concentrated on the celebrant, to the  modalities of active participation of the laity, to the access of women to ministerial roles.”

The document cites the U.S. report, which describes division regarding the traditional Latin Mass: “The most common issue regarding the liturgy is the celebration of the pre-Conciliar Mass. The limited access to the 1962 Missal was lamented; many felt that the differences over how to celebrate the liturgy ‘sometimes reach the level of animosity. People on each side of the issue reported feeling judged by those who differ from them.’”

93. “The reports do not fail to point out the main shortcomings of the actual celebratory praxis, which obscure its synodal effectiveness. In particular, the following are emphasized: the liturgical protagonism of the priest and the risk of the passivity of the wider liturgical community; poor preaching, including the distance between the content of the sermon, the beauty of faith and the  concreteness of life; and the separation between the liturgical life of the assembly and the family network of the community. The quality of homilies is almost unanimously reported as a problem.”

38. “Longing for a home also characterizes those who, following the liturgical developments of the Second Vatican Council, do not feel at ease.”

71. “The synodal journey has brought out a number of tensions … We should not be afraid of them, but articulate them in a process of constant communal discernment, so as to harness them as a source of energy without them becoming destructive: only in this way will it be possible to continue walking together, rather than each going their own  way. This is why the Church also needs to give a synodal form and way of proceeding to its own institutions and structures, particularly with regard to governance. Canon law will need to accompany this process of structural renewal creating the necessary changes to the arrangements currently in place.”

In particular, the document recommends: “Economic, diocesan and parish councils should then be added, taking note also of the episcopal and presbyteral councils around the bishop. Many reports show the need for these bodies to be not only consultative, but places where decisions are made on the basis of processes of communal discernment rather than on the majority principle used in democratic regimes.”

82. “The overwhelming majority of reports indicate the need to provide for formation in synodality. Structures alone are not enough: there is a need for ongoing formation to support a widespread synodal culture.” Russian presidential spokesman Dmitri Peskov said his government is willing to talk with Pope Francis, the U.S., and France to find a solution to the war in Ukraine.