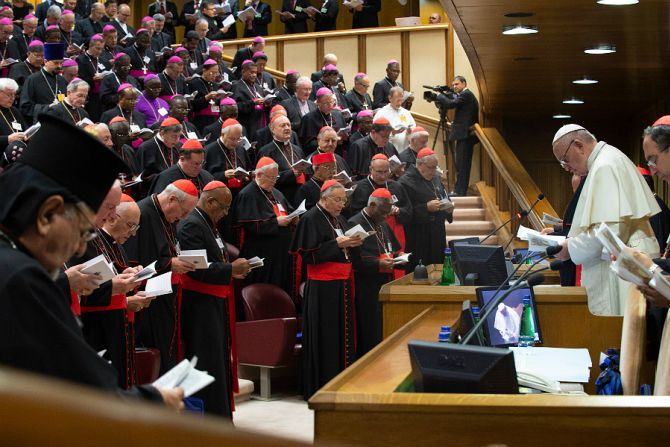 The Vatican revealed on Thursday a key document to guide the next stage of discussions in the Synod on Synodality.

The working document, titled “Enlarge the space of your tent,” covers issues across a broad spectrum, from the clergy sexual abuse crisis to Christian unity. The text calls for “a Church capable of radical inclusion” and says that many synod reports raised questions about the inclusion and role of women, young people, the poor, people identifying as LGBTQ, and the divorced and remarried.

The 44-page working document is officially called the DCS (Document for the Continental Stage). It summarizes the reports shared with the Vatican by bishops’ conferences, religious congregations, departments of the Roman Curia, lay movements, and other groups and individuals.

Published on Oct. 27, the document aims to be “the privileged instrument through which the dialogue of the local Churches among themselves and with the universal Church can take place during the Continental Stage.”

The text notes diverse challenges the Church faces worldwide, such as increased secularization, forced conversion and religious persecution, lack of structures for people with disabilities, and clericalism.

It identifies the celebration of the Mass, whether according to the pre-Vatican II missal or the post-Vatican II liturgy, and access to the Eucharist as “knots of conflict” in the Church and cites a great “diversity of opinion” on the subject of priestly ordination for women, which some reports called for and others considered “a closed issue.”

“Enlarge the space of your tent” is “not a conclusive document” but is meant to spark dialogue and arouse feedback on what should be the priorities for discussion during the first session of the Synod of Bishops in October 2023.

The text will operate as an outline for the next stage of synod discussions: The Continental Assemblies, to be held on different continents between January and March 2023.

In particular, the document presents three reflection questions to which Continental Assemblies will need to respond after people have read and prayed over its content:

All Catholic dioceses are asked to provide feedback on these questions. Diocesan feedback will be collected and synthesized by bishops’ conferences, who will share responses with the Continental Assembly.

The Continental Assemblies will meet between January and March 2023. According to the document, they should be made up of representatives from the entire People of God, with particular attention paid to ensuring the participation of women, young people, people living in poverty, representatives of other religions, and people with no religious affiliation.

Each Continental Assembly is required to submit a final document of no more than 20 pages, providing the region’s response to the three reflection questions by March 31, 2023.

“Their task will be to draw up a list of priorities, upon which the First Session of the XVI Ordinary General Assembly of the Synod of Bishops, which will be held from Oct. 4–29, 2023, will carry out their discernment,” the document says.

Bishops are also asked to meet to “collegially reread” the synod experience and validate and approve the final document produced by the Continental Assembly to ensure that it is the “fruit of an authentically synodal journey.”

The Vatican published “Enlarge the space of your tent” one year into the three-year global synodal process. Synod leadership, an advisory committee, and approximately 30 hand-selected people drafted the working document in September at a retreat house outside Rome in Frascati, Italy.

The continental phase of the Synod on Synodality follows the local stage, in which parishes and dioceses held listening sessions and solicited feedback from Catholics on the future of the Church. The document is filled with direct quotations from the reports sent by bishops’ conferences around the world, summarizing the feedback from the diocesan stage of the Synod on Synodality.

For example, the Southern African Catholic Bishops’ Conference wrote in its report: “Southern Africa is also impacted by the international trends of secularization, individualization, and relativism. Issues such as the Church’s teaching on abortion, contraception, ordination of women, married clergy, celibacy, divorce and remarriage, Holy Communion, homosexuality, LGBTQIA+ were raised up across the dioceses both rural and urban. There were of course differing views on these and it is not possible to give a definitive community stance on any of these issues.”

Pope Francis recently announced his decision to extend the Synod on Synodality to 2024. Following the Continental Phase, the Synod of Bishops will meet in Rome in October 2023 and October 2024.

The feedback from the seven Continental Assemblies on the Document for the Continental Stage (DCS), will be used as the basis for another instrumentum laboris, or working document, that will be completed in June 2023 to guide the Synod of Bishops’ discussion. In a message marking the 60th anniversary of Vatican II’s opening, the general secretariat of the Synod on Synodality called the event “one of its most precious legacies.” A member of the United States Commission on International Religious Freedom says it is “tremendously disappointed” with the Vatican’s decision.