Are Halloween ‘hell houses’ a good way to save souls? A scene from the trailer promoting Liberty University's campus ministry production of "Scaremare." | Scaremare on YouTube

This October some churches and ministries in the United States are once again hosting Christian versions of haunted houses, and nonbelievers and believers alike are lining up for some rather existential spine-tingling for the first time since the pandemic.

Popular among evangelical Protestant churches in the South, these “judgment houses” typically stage dramatic representations depicting what happens after people die, leaving visitors to ponder whether they themselves are headed for heaven or hell and, presumably, to act accordingly.

Is this a good way to save souls? Some Catholics experts in evangelization who spoke to CNA have reservations.

A different way to evangelize

The late Jerry Falwell, the Baptist televangelist and founder of Liberty University in Lynchburg, Virginia, is credited with hosting the first judgment house in 1972, “Scaremare.”

Scaremare is still going strong in Lynchburg, where the university’s campus ministry stages a production every year around Halloween that draws people from all over the region attracted by the lure of “fun-house rooms and scenes of death in order to confront people with the question ‘What happens after I die?’”

The performance does not disappoint those looking for the sort of adrenaline surge a horror movie produces. As many as 4,000 visitors a night witness gruesome death scenes including a massacre at a movie theater and a camper who is mauled by a wild animal.

According to Josh Coldren, the director of the 2022 production of Scaremare, the scenes are intended to make people think about their fears and their mortality.

“We talk about how everyone faces death, but how there is hope beyond our fears and hope beyond death, and that hope is in Jesus Christ,” Coldren told CNA.

According to Scaremare’s website, over 26,000 people who visited over the years “have made decisions for Christ over the past two decades. Ironically, this House of Death points to the Way of Life!”

While judgment houses can function as memento mori, efficacious reminders of the inevitability of death, some judgment houses, also known as “Hell Houses,” have become controversial for taking the idea to an extreme. Graphic scenes such as abortions, extramarital sex, and drug use are sometimes depicted along with the consequence of these actions as the sinners are shown condemned to spend eternity in hell.

Scaremare doesn’t get into these issues or talk about hell at all, Coldren told CNA.

Tom Hudgins is the owner of Judgement House, a company based in Seminole, Florida, that provides scripts to churches to stage dramas. Before COVID, he told CNA, they helped as many as 350 churches at a time hold Judgement Houses. They are slowly getting back to business, he said, and about 50 participating churches are listed on their website.

Hudgins explained to CNA that, unlike more extreme Hell House productions, his scripts never talk about social issues. Small groups of visitors walk through scenes meant to encourage self-reflection. Each production begins with death, by a car crash or cancer, for example, and then the audience sees what happens after death.

“They see what hell would be like, but they also see what heaven will be like, and everyone can make their own decisions,” Hudgins said.

Bonnie Gilliland, the dramatic director at Morningside Baptist Church in Tallahassee, Florida, is staging a play with the help of Judgement House this October. She told CNA that the productions are a way of sharing the Gospel.

“We include a lot of Scripture, it’s very biblically based,” she said.

Gilliland explained that this year’s production isn’t just for nonbelievers — it’s meant to give the regular churchgoer a wake-up call.

“The current drama gives people an opportunity to understand and examine whether they have a relationship with Jesus Christ because it’s more than just going to church, it’s about accepting Jesus as your savior and receiving the gift of eternal life,” Gilliland said.

Kelly Armstrong, the director of the judgment house at New Harmony Baptist Church in Albertville, Alabama, told CNA that past productions have depicted scenes of car wrecks, overdoses, and abuse.

Visitors see “how people make decisions that affect their eternity,” he said. “It brings our church together and makes people think.”

Judgment houses have not found favor among Catholic churches in the United States, and two experts in evangelization and pastoral care told CNA that they don’t think talking about hell attracts people to the Church.

Sherry Weddell is the founder of the Catherine of Siena Institute, an apostolate that helps evangelize Catholic parishes to turn pew-sitters into “intentional missionary disciples.” She told CNA that she advises any Catholics considering introducing hell-related themes to their Halloween decorations or celebrations to rethink that idea.

“If you live in an area that has a significant number of young adults, especially parents of young children, or in an area that is highly secularized like urban areas of the East or West coasts, many will find it offensive or off-putting. And there is a real chance that sensitive and young children could be upset by it which would fuel their parents’ unhappiness with the sponsoring Catholic community,” Weddell explained.

“You could upset people who might otherwise have been open to attending an Advent or Christmas event at your parish or just open to a friendship with a Catholic like you.

“Instead of building or strengthening bridges of trust, you could be shattering or weakening whatever trust may already exist. There are creative, positive, child and parent-friendly alternatives such as ‘trunk-or-treating,’ costume parties, and community of light events that foster both long-standing relationships and fun,” Weddell said.

Monsignor Stephen Rossetti, the chief exorcist for the Archdiocese of Washington and a psychologist and researcher at the Catholic University of America, told CNA that the threat of hell isn‘t effective in this day and age.

“People today are not convinced or influenced by threats of hell. The Church just really stopped doing that because it just doesn‘t work. You know, you can do all the hellfire and damnation sermons you want, but people just kind of yawn, “ Rossetti said.

“We‘re trying to emphasize God‘s love and God‘s mercy, which I think is much more to the point, frankly. And also more of a message that’s needed in our day. And I think that started with Pope John XXIII at Vatican II. He said, today what the message needs to be is of God‘s mercy and compassion and God’s love.

“This is what attracts people, and this is sort of the core of our message. God loves us and God has saved us out of his love and compassion in Jesus,” he said. 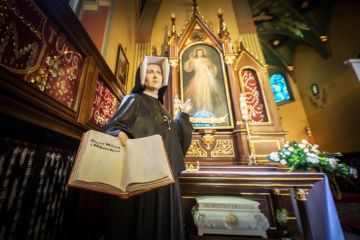 7 things you need to know about St. Faustina and her vision of Hell

While Catholics around the world are familiar with St. Faustina Kowalska and her connection to Divine Mercy, many may not know about the way in which Jesus talked to her about her calling, Hell, and her mission to proclaim the mercy of God. The Catholic population in Canada has declined by almost 2 million people in the last 10 years, the Canadian census has found in a report.