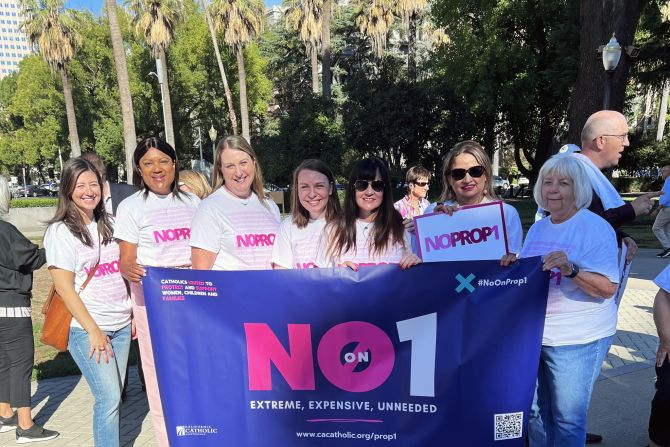 Participants in a demonstration against Proposition 1 outside the California capitol in Sacramento, Oct. 6, 2022. | Photo courtesy of California's No on Prop. 1 Campaign

Americans in five states voted on the issue of abortion during the 2022 midterm elections. Three states — California, Michigan, and Vermont — proposed constitutional amendments to advance abortion. All three passed.

At the same time, citizens in Kentucky weighed a pro-life amendment and Montana voters considered a measure that promises to protect babies who are born alive after attempted abortions. Kentucky voted no to its pro-life measure. Montana’s results are still coming in, with a current majority voting no.

“Anyone arguing abortion is winning is missing what happened tonight,” he told CNA. “We had strong pro-life candidates at the federal and state level win because they seized on life as a winning issue and exposed the extreme taxpayer-funded abortion until birth policy of their opponents.”

“We know life is a winning issue, we know how to win on life, and we know the American people reject the extreme policy of Planned Parenthood and their candidates,” he added. “Going forward, we have to do better at using our winning strategy and using it to fight back against the millions of dollars Big Abortion puts into ballot initiatives to cause confusion and hide their extreme policy. When the voters see the abortion industry pushing abortion on demand, they reject it — and if we focus on exposing that extreme policy we will win.”

Proposition 1 will amend California’s constitution to explicitly protect abortion after citizens voted to pass it.

Following the election results, Catherine Hadro, director of media relations for California’s No on Proposition 1 campaign, stressed a disconnect between what Proposition 1 allows and what California voters support.

The California Catholic Conference encouraged pro-life voters to say “no” to Proposition 1, calling it “an expensive and misleading ballot measure that allows unlimited late-term abortions — for any reason, at any time, even moments before birth, paid for by tax dollars.”

A campaign for the amendment led by pro-abortion groups, called Yes on Proposition 1, argued that Proposition 1 would “ensure that, in California, people continue to have the power to control their own bodies and personal decisions.”

As of mid-Wednesday morning, the New York Times reported that 56% voted yes to the proposal and 44% voted no, with 87% of the votes in.

On the ballot, the amendment is identified as a “proposal to amend the state constitution to establish new individual right to reproductive freedom, including right to make all decisions about pregnancy and abortion; allow state to regulate abortion in some cases; and forbid prosecution of individuals exercising established right.”

The Citizens to Support MI Women and Children coalition, which includes the Michigan Catholic Conference, advised pro-life citizens to vote no on the amendment. The group said it would “radically distort Michigan’s Constitution to create a new unlimited right to abortion.”

“This poorly-worded amendment would repeal dozens of state laws, including our state’s ban on tax-funded abortions, the partial-birth abortion ban, and fundamentally alter the parent-child relationship by preventing parents from having input on their children’s health,” the group said.

In support of the amendment, Reproductive Freedom for All argued that “in addition to ensuring access to a broad range of reproductive health care, this amendment would make sure no one goes to prison for providing safe medical care.”

As of mid-Wednesday morning, the New York Times reported that 77.4% voted yes to the proposal and 22.6% voted no, with more than 95% of the votes in.

It reads: “That an individual’s right to personal reproductive autonomy is central to the liberty and dignity to determine one’s own life course and shall not be denied or infringed unless justified by a compelling State interest achieved by the least restrictive means.”

The Roman Catholic Diocese of Burlington, which includes the entire state of Vermont, published a piece in its diocesan bulletin warning that the amendment “promises to enshrine unlimited, unregulated abortion throughout all nine months of pregnancy in our state’s founding document” and “would permanently block any attempt to protect the unborn — even those who can survive outside the womb.”

Vermont Right to Life Committee urged citizens to vote no.

Led by pro-abortion groups, Vermont for Reproductive Liberty Ballot Committee argued: “We need this amendment because important medical decisions should be guided by a patient’s health and well-being, not by a politician’s beliefs.”

Kentucky voted against a pro-life measure — Amendment 2 — which says the state’s constitution does not protect abortion.

As of mid-Wednesday morning, the New York Times reported that 52.6% voted no to the amendment and 47.4% voted yes, with 88% of the votes in.

It reads: “To protect human life, nothing in this Constitution shall be construed to secure or protect a right to abortion or require the funding of abortion.”

Kentucky currently prohibits abortion with exceptions for saving a woman’s life or preventing serious risk to her physical health.

The Yes for Life alliance, which includes the Catholic Conference of Kentucky, asked pro-life citizens to vote yes. The group said that the amendment’s language “will prevent state judges from asserting their own preferences over the will of legislators and the voters.”

Opposing the amendment, the Protect Kentucky Access coalition claimed that the amendment would “pave the way for the state to ban abortion in all cases.”

Voters in Montana considered Legislative Referendum 131, which says it will protect babies who are born alive after attempted abortions.

Montana law allows abortion before viability. Abortion is also permitted after viability to save a woman’s life or prevent serious risk to her physical health.

SBA Pro-Life America’s Katie Glenn previously told CNA that she found the ballot initiative in Montana — a state she said has been getting progressively more pro-life — the most interesting.

“I think that one’s different than the other four, which are all very much time-gestational bans, in that this is not a pro-life/pro-choice issue,” she said. “This is about providing lifesaving care to a child who’s already been born.”

Opposing the referendum, Compassion for Montana Families claimed that it “​​would introduce extreme penalties for medical providers who, at the family’s request, do not take a dying infant away from its parents in order to perform invasive and even painful medical treatments in tragic circumstances where they have no chance of survival.” The hard-fought Georgia Senate race between Republican Herschel Walker and the incumbent Democrat, Sen. Raphael Warnock, now appears to be headed for a runoff election on Dec. 6.