Jewish actor converts to Catholicism: the Virgin Mary ‘is my most beautiful love’ 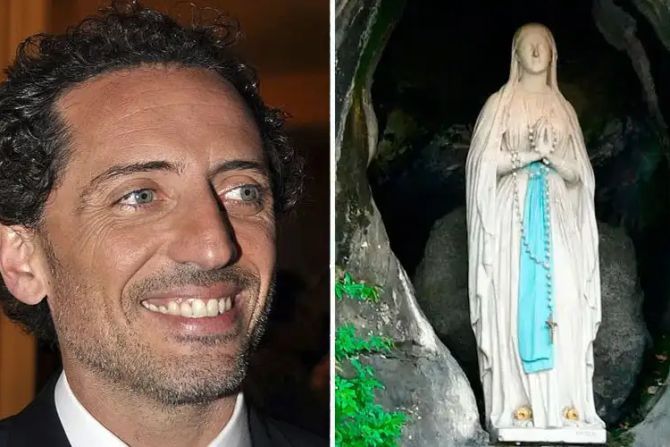 The famous Jewish actor and humorist Gad Elmaleh, beloved in France, announced his conversion to the Catholic faith, a process in which he says the Virgin Mary played a crucial role.

Elmaleh, 51, was the partner of Charlotte Casiraghi, the daughter of Princess Caroline of Monaco, with whom they have a son named Rafael.

His conversion to Catholicism is depicted in his new film, “Reste un peu,” (“Stay a while”).

The Jewish actor, who according to the Spanish newspaper El Mundo will take the name of Jean-Marie when he is baptized, has studied theology in Paris, and in 2019 he participated in a musical in London about St. Bernadette Soubirous, the visionary who saw Our Lady of Lourdes.

Elmaleh told the French newspaper Le Figaro that “the Virgin Mary is my most beautiful love” and expressed his surprise that in France the “vast majority of Catholics don’t live their faith openly.”

As a child, he recounted in the interview, he entered a church and saw an image of the Mother of God.

“It wasn’t a vision, just a simple statue, but I was petrified. I began to cry and hid for fear of being discovered by my family, for fear of curses and superstition. I kept it a secret for my entire childhood,” he recalled.

In an interview on the program “L’invité” (“The Guest”), posted Nov. 9 on YouTube, Elmaleh spoke about the film “Reste un peu,” which will open in France Nov. 16.

The actor’s actual parents are in the film, who are not very “happy” with his decision to convert to Catholicism but who have chosen to give him their support.

The actor and humorist said that “it’s true that it’s a spiritual, religious coming out. There’s a lot of mixture of fiction and reality,” but “it’s true that I question myself at the age of 50.”

“It’s a search in which I ask myself where, who, when, there’s a God, there is no God,” he said, but he affirms that “the Virgin Mary calls me and protects me.”

In the interview, Elmaleh recounted that he saw an image of the Mother of God “when I was a boy in Morocco, in Casablanca, where there were Christians, Jews, Muslims, a country that’s an example of incredible fraternity; but at the same time a certain taboo with Christianity and the churches.”

“I couldn’t go into the churches because it was a sin, it was prohibited; but when I was 6 or 7 years old, I entered one and said to myself, ‘It’s not bad here, why do they prohibit me?’” the actor said.

Elmaleh said he hopes the film engenders “some questioning” in people who see it and stressed that it is “mainly [a] testimony, a love story." “The power of prayer keeps the Ukrainian people alive, so I ask you to continue praying for peace in Ukraine.” Every Nov. 9, the Church in Spain celebrates the Virgin of Almudena, whose image “hides” a peculiar story that might not be familiar to many. “The death of Archbishop Mario will be felt not just in the Archdiocese of Glasgow, but across Scotland and beyond.”