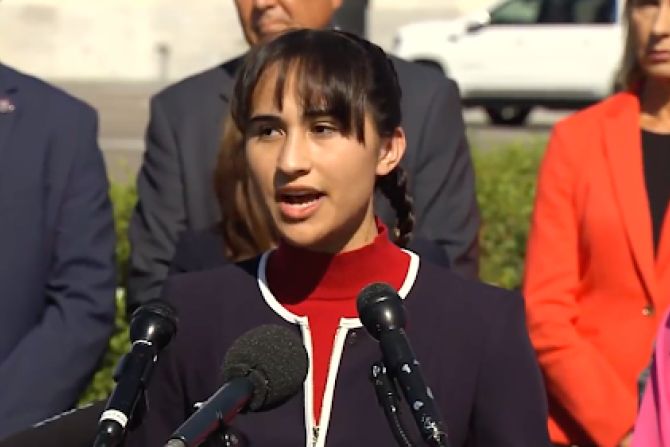 Chloe Cole, the outspoken 18-year-old raising awareness about the dangers of gender transitions on children, is suing the doctors who performed transgender procedures on her when she was a minor.

The procedures included an irreversible double mastectomy that surgically removed both of her breasts.

“These butchers have gone unquestioned and unchallenged for too long,” Cole told CNA Thursday night.

“My goal in this lawsuit is to set a precedent that will change the landscape for these barbaric processes and to create a pathway for other de-transitioners to seek justice,” said Cole, a self-described “former trans kid.”

Thank you @TuckerCarlson for having @ChoooCole and me on tonight to announce the latest legal action by @Liberty_Ctr.
We formally sent a letter of intent to sue Kaiser Permanente and Chloe’s doctors for mutilating her.
Support Chloe's case here: https://t.co/BdRAnfyulr pic.twitter.com/A5dnAUDT4A

In the suit, Cole alleges that her former medical providers and the Kaiser institutions “performed, supervised and/or advised transgender hormone therapy and surgical intervention [when] she was between 13–17 years old” that constituted a “breach of the standard of care.”

Cole struggled with gender dysphoria from the young age of 11, when she was first exposed to LGBTQ ideology through online platforms.

At just 13 years old, Cole was put on puberty blockers and testosterone by her doctors, which caused a ripple of negative side effects she still experiences to this day — including joint pain, weak bone density, and ongoing urinary tract infection symptoms.

According to the suit, the signed consent form given to Cole before receiving puberty blockers and hormones “contained no specific information regarding the actual risks of the testosterone and puberty blockers.”

The suit says “the form failed to mention the known risks pertaining to puberty blockers and testosterone treatment” including side effects like permanent fertility loss, painful intercourse, increased risk of osteoporosis, bone fractures, and suicidal ideation.

“As a result of the so-called transgender ‘treatment’ that Defendants performed on Chloe, she now has deep emotional wounds, severe regrets, and distrust for the medical system,” the suit states.

“Chloe has suffered physically, socially, neurologically, and psychologically. Among other harms, she has suffered mutilation to her body and lost social development with her peers at milestones that can never be reversed or regained,” it adds.

Cole told CNA in September that her parents “were scared and desperate for answers” when she first told them she was a boy and that their decision to sign off on transitioning her was “forced under extreme duress.”

The suit alleges that Cole’s doctors “coerced” her and her parents into medically transitioning her by telling them she was at a high risk of suicide if she did not.

“Defendants falsely informed Chloe and her parents that Chloe’s gender dysphoria would not resolve unless Chloe socially and medically transitioned to appear more like a male,” the suit reads.

According to Cole, her parents were given an “ultimatum” by her doctors: “Would you rather have a dead daughter or a live son?”

After undergoing a double mastectomy that surgically removed both of her breasts, Cole’s “mental health and suicidality issues worsened significantly,” the suit states.

The mastectomy severed Cole’s nerve endings in her breasts and caused permanent side effects. She still has complications from the surgery, which have not yet healed, two years later.

Cole said that she most regrets how “the beauty of motherhood” was stripped from her at an age when she wasn’t able to fully comprehend the loss.

The suit states Cole “is devastated that she will never be able to breastfeed a baby.”

“At 15, I wasn’t really thinking. I was a kid, just trying to fit in — not thinking about the possibility of becoming a parent,” Cole told CNA.

Cole is suing for general damages against her doctors and Kaiser for “grossly negligent treatment.” The suit details that the “full extent” of Cole’s damages is still being investigated but is estimated around at least $700,000.

Dhillon is representing Cole alongside lawyers from LiMandri & Jonna LLP through her legal nonprofit, The Center for American Liberty.

In the interview, Dhillon condemned what happened to Chloe as “medical malpractice” and “mutilation.”

“We intend to stop it and we want to hear from other people who’ve had these problems as well. We intend to shut these barbaric and unnatural practices down,” Dhillon said.

Cole’s lawsuit was announced on the center’s website under “Justice for Chloe,” where other patients who have had similar experiences with “gender-affirming care” can reach out to the firm’s lawyers.