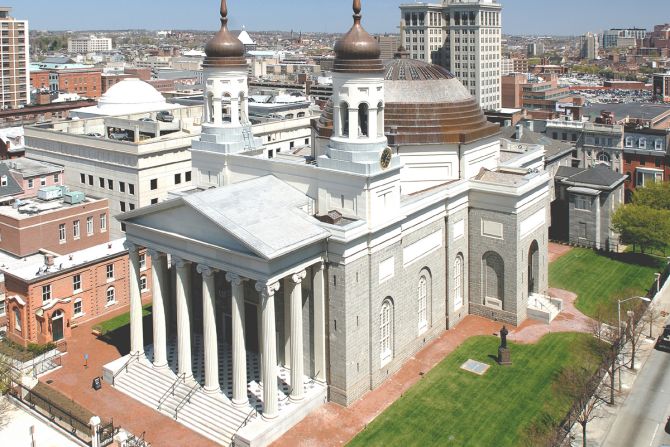 The bishops of the United States are meeting this week for their fall assembly in Baltimore. They’re gathering to elect a new president and discuss issues facing the Church such as the Ukraine war and the Synod on Synodality, among other things.

In the early days of the United States Conference of Catholic Bishops (USCCB) in the early 2000s, the bishops held their fall meeting in Washington, D.C. — a location that makes a lot of sense, given Washington’s status as the nation’s capital, as well as the city where the USCCB is headquartered.

But since 2006, the bishops’ fall assembly has been held in nearby Baltimore.

But what’s so special about Baltimore? For American Catholics, quite a lot.

For starters, Baltimore was the first diocese in the United States, having been established as such in 1789 and elevated to an archdiocese in 1808. Before its establishment, Catholics in the young United States were under the jurisdiction of the Apostolic Vicariate of the London District in England.

Maryland, at the time, was the most Catholic of the 13 colonies, having been founded by Catholic colonists wishing to create a society where they could practice their faith. The territory of the Diocese of Baltimore originally included the entire fledgling country.

John Carroll was chosen as Baltimore’s first bishop, and thus the de facto leader of Catholics in the U.S. A cousin of Charles Carroll — the sole Catholic signer of the Declaration of Independence — Carroll’s tenure as bishop led to many Catholic firsts. In 1791 he founded the first seminary in the country, and he ordained the first priest in the U.S. in 1793. Carroll laid the cornerstone for the Basilica of the National Shrine of the Assumption of the Blessed Virgin Mary, Baltimore’s present co-cathedral, in 1806. In 1809, the future St. Elizabeth Ann Seton arrived in Baltimore and started the country’s Catholic school system.

Though several other dioceses in important cities such as New York, Boston, and Bardstown (now Louisville) would be established after 1808, Baltimore would remain the only archdiocese in the country until 1846. The Archdiocese of Washington was not created until the 20th century.

In addition to being “first,” Baltimore has historically played an important role in hosting councils and meetings in the U.S. According to the archdiocese, the first Baltimore synod was held in 1791 when 22 priests met with Bishop Carroll to draw up guidelines for the practice of the faith by the clergy and laity, and later synods took on a national character since the diocese was the only one in the country. Most notably, plenary councils of all the country’s bishops were held in Baltimore in 1852, 1866, and 1884. One enduring effect of the last plenary council was setting in motion the process to create the Baltimore Catechism, which was the primary teaching document in U.S. Catholic schools for nearly a century.

According to the archdiocese, Baltimore today “enjoys a position of importance in the American Church as a leading center of ecumenical, social, and civic progress, along with being one of the prime locations for priestly formation in the United States.”

Given all this history in Baltimore, it’s not too surprising that the bishops’ annual fall assembly was moved to Baltimore in 2006. The U.S. Catholic bishops are preparing to vote on whether to advance the causes for sainthood for three American women. The meal was part of several Vatican-sponsored initiatives marking the sixth annual World Day of the Poor.