Philly archbishop to head Catholic Relief Services board of directors 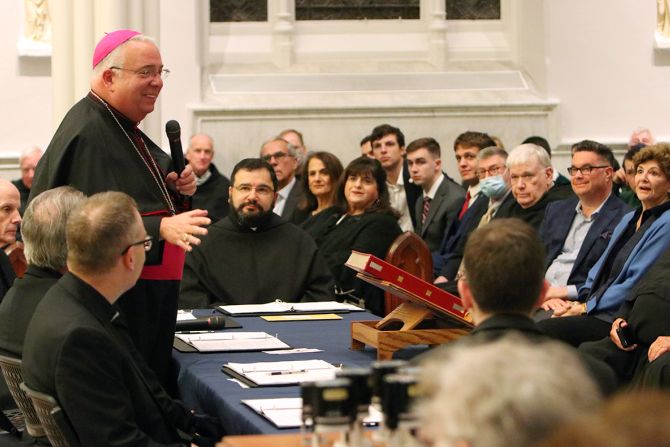 Archbishop Nelson Perez speaks about the heroic virtues of Father Bill Atkinson, O.S.A., and the work performed to prepare the formal documents related to his cause for beatification and canonization. | Sarah Webb

Philadelphia’s Archbishop Nelson Pérez will serve as the next chairman of the Catholic Relief Services (CRS) board of directors, heading up the U.S. bishops’ international relief agency that serves 193 million people in 116 countries.

“For more than 75 years, CRS has been a beacon of hope for poor and vulnerable families around the world,” Pérez said in a statement Tuesday. “Its humanitarian aid initiatives are often the difference between life and death for those facing poverty, famine, war, and epidemics.”

The three-year appointment is one of the first official acts of Archbishop Timothy Broglio of the Archdiocese for Military Services, USA, who was elected president of the United States Conference of Catholic Bishops (USCCB) at its fall assembly last week.

Broglio chose the Philadelphia archbishop for this role “because of his commitment to the agency’s mission,” Chieko Noguchi, a spokesperson for the USCCB, told CNA Nov. 22.

CRS was founded in 1943 and will mark its 80th anniversary next year. Together with more than 1,700 partners, it works in emergency response, agriculture, capacity-building, education, health care, justice and peacebuilding, microfinance, and water and sanitation. According to the agency’s fact sheet for fiscal year 2021, the agency had about $1 billion in annual revenue, 93% of which it dedicated to programs.

Pérez, 61, has served as archbishop of Philadelphia since February 2020. Born in Miami to Cuban exiles, he was ordained a priest for the archdiocese in 1989 and spent his time as a priest with a particular focus on Hispanic ministry. In 2012 Pope Benedict XVI named him an auxiliary bishop for New York’s Diocese of Rockville Centre, and Pope Francis named him bishop of Cleveland in 2017.

“We are thrilled to welcome Archbishop Pérez as the chairman of our board of directors,” Sean Callahan, president and CEO of CRS, said in a statement. “I look forward to working with him as we address some of the most pressing issues CRS has faced, including the global food crisis and the impact of climate change on people living in poverty.”

Bishop Frank J. Caggiano of Bridgeport, Connecticut, the outgoing CRS board of directors chairman, praised Pérez as “a man of deep conviction about the need to protect the dignity of all of our brothers and sisters, particularly the most vulnerable among us.”

Pérez said he was “deeply grateful” to Caggiano.

“His work to promote and defend human life while fostering a more just and peaceful world is truly commendable/ I look forward to building on his efforts,” the archbishop said.

“In addition, I thank Archbishop Broglio for his confidence in my ability to provide counsel and serve the best interests of the poor and vulnerable,” he continued. “I am excited to collaborate with the other members of the CRS board whose hearts are on fire for Jesus and serve as his missionary disciples.”

“I ask for your prayers as I embrace this new role in service to the broader Church,” he said.

The U.S. bishops at their annual meeting elected three episcopal board members. Atlanta’s Archbishop Gregory J. Hartmayer, OFM Conv., will serve his first term, while Bishop Mark J. Seitz of El Paso and Bishop Anthony B. Taylor of Little Rock will both return to serve a second term.

On Jan. 1, Matthew M. McKenna of Bronxville, New York, will join the CRS board. McKenna is a resident executive at Georgetown University’s McDonough School of Business. In that role, he launched an initiative to study the role of private-sector investment in rural economic development.

Archbishop Broglio will be leaving his role as chairman of CRS’ Overseas Operation Committee. Board member Stephen Walsh will also leave after six years on the CRS board.

On Tuesday Pope Francis removed the entire leadership of Caritas Internationalis, including its president, Cardinal Luis Antonio Tagle. The pope appointed an administrator to improve the organization’s management. An independent review reportedly found deficiencies in Caritas Internationalis’ “management and procedures” and these were “seriously prejudicing team spirit and staff morale.”