José María Villalón, a sports medicine specialist and the head doctor of the Atlético de Madrid soccer team, described the pope as a “very stubborn patient” in a radio interview this week.

The doctor said that Pope Francis is “a very nice and very stubborn patient in the sense that there are surgical procedures that he does not want. We have to offer him more conservative treatments so that he will agree to them.”

Speaking in an interview with COPE, the Spanish bishops’ conference radio station, on November 20, Villalón said that the pope’s issue with his knee had affected some of his other joints as well.

“Sometimes it starts with a joint with osteoarthritis and other joints deteriorate because they are overloaded,” he said. “We are trying to make sure that this does not advance and that things get better.”

Villalón said that he was contacted by both the Apostolic Nunciature in Spain and the Spanish bishops’ conference, who “asked a group of specialists if we could help the pope.”

Pope Francis, who turns 86 next month, has alternated between using a wheelchair and a walking cane since May.

Earlier this month, the pope told journalists that he was in “a lot of pain” on a flight to Bahrain. Pope Francis has previously canceled public appearances and trips due to his knee trouble, including a scheduled trip to Africa in July.

Villalón said that at first he was “nervous” during his first communication with the pope, but that they bonded because “he likes soccer.”

In particular, the pope expressed his fondness for Atlético de Madrid’s striker, Ángel Correa, an Argentine soccer player who used to play for the San Lorenzo soccer club in Buenos Aires.

Correa recently joined Argentina’s national soccer team at the FIFA World Cup in Qatar, where Argentina suffered a shocking defeat in a game against Saudi Arabia on Nov. 22. 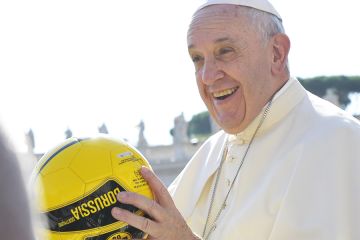