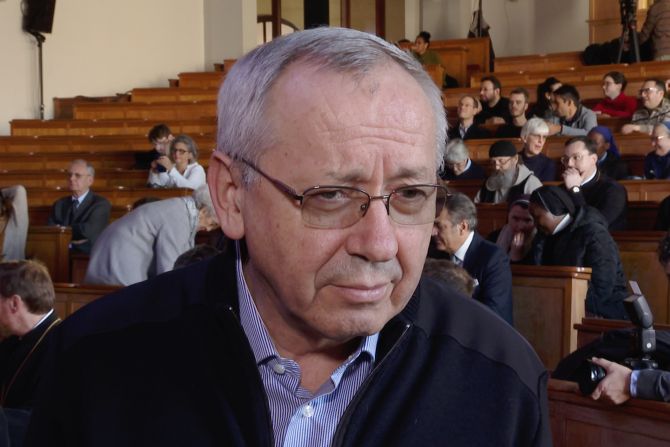 A prominent Jesuit priest and artist had his ministry restricted, reportedly after an investigation by his religious order into allegations of abuse against religious sisters in Slovenia.

The Jesuits said in a statement dated Dec. 2 that the order has barred 68-year-old Father Marko Ivan Rupnik, SJ, from hearing confessions or conducting spiritual direction since the Vatican received a complaint against him in 2021.

The Vatican declined in October to carry out a canonical process due to the statute of limitations, the order said. The complaint did not include minors.

The Jesuit order said the restrictions on Rupnik’s ministry were still in effect and included a ban on leading the Ignatian Spiritual Exercises. The priest is also prohibited from engaging in public activities without the permission of his superior.

Rupnik, the director of the Centro Aletti in Rome, was the creator of the official image of the 2022 World Meeting of Families, and for over 30 years has designed mosaic artworks for chapels, churches, and shrines around the world.

The Jesuit is best known for overseeing the renovation of the Redemptoris Mater Chapel in the Vatican’s Apostolic Palace, which reopened in 1999 after three years of work.

Rupnik also designed the Redemptor Hominis Church at the St. John Paul II National Shrine in Washington, D.C., as well as other projects in the U.S.

Despite the restrictions on his public ministry, on Nov. 30, Rupnik received an honorary doctorate from the Pontifical Catholic University of Paraná in Brazil.

The Centro Aletti has also continued to publish a video on YouTube every Sunday of Rupnik commenting on the Sunday Gospel. The Diocese of Rome posted a video of Rupnik speaking about eucharistic adoration in February.

According to the Jesuits, the Vatican’s Dicastery for the Doctrine of the Faith (DDF) asked the order to conduct a preliminary investigation into the Slovenian priest, who has been incardinated in the Diocese of Rome since the early 1990s.

A final report was submitted to the DDF, and in early October, the Vatican “found that the facts in question” fell outside the statute of limitations, the Jesuits said.

A source in the Diocese of Rome confirmed Dec. 5 to ACI Prensa, CNA’s Spanish partner agency, that the provincial of the Jesuits had informed the diocese of the precautionary measures against Rupnik and suggested that his pastoral activities in the diocese be limited.

The Diocese of Rome did not perform its own investigation into the allegations against Rupnik, the source said, since the accusations concerned alleged abuse in Slovenia, not in Rome.

The source also confirmed that Rome auxiliary Bishop Daniele Libanori had conducted a separate inquiry, unrelated to Rupnik, into the Loyola Community, which was founded in Slovenia.

During the canonical visitation, which is still ongoing, Libanori received accusations from at least nine women against Rupnik, the source said. Rupnik was reportedly the community’s confessor and spiritual director for a number of years.

Run by law and religion scholars, the Italian website “Silere non possum,” Latin for “I cannot keep quiet,” published a story with reports that Rupnik had abused consecrated women in the Loyola Community. As California’s three-year window to file child sex abuse lawsuits past the statute of limitations nears its conclusion, 66 Catholic clergy and religious have been named in 116 lawsuits in Alameda County.