Meet Sister Bernadette, the most recently-cured person at Lourdes 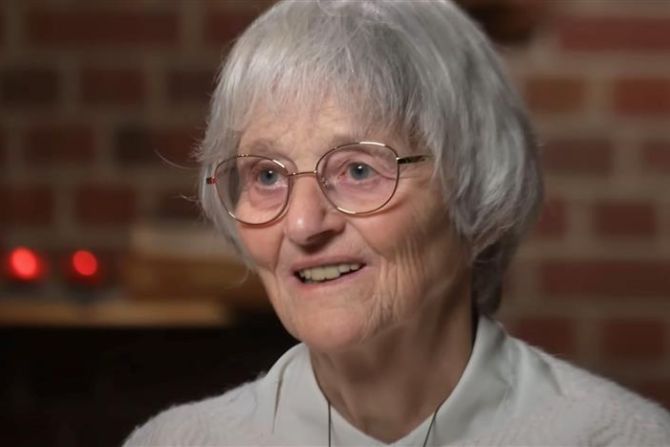 Eighty-three-year-old Sister Bernadette Moriau of France speaks about her miraculous cure following her visit to the Sanctuary of Our Lady of Lourdes, Dec. 18, 2022. | Credit: YouTube screenshot taken via 60 Minutes

When she traveled to the small French town of Lourdes 14 years ago, Sister Bernadette Moriau didn’t know that she would be miraculously cured.

“I always believed in miracles, but not for me,” the 83-year-old told correspondent Bill Whitaker in a 60 Minutes segment that aired Sunday.

It was her doctor who persuaded her to take a pilgrimage to the Sanctuary of Our Lady of Lourdes located in southern France in 2008, she told Whitaker. Suffering from cauda equina syndrome, a disorder of the nerves and lower spine, she arrived in a wheelchair.

During a stroll in Bresles, France, Moriau told Whitaker that her left foot was once twisted and limp and that, to walk, she needed a back and leg brace as well as an implant to dull nerve pain and massive doses of morphine. That changed when she went to Lourdes.

“I didn’t go there for a miracle,” she stressed. “I just went there to pray with others.”

The Sanctuary of Our Lady of Lourdes is a popular destination for the faithful with special devotions to Mary and for those seeking miraculous healings. Each year, it attracts more than 3 million visitors worldwide. It marks the site where a young St. Bernadette Soubirous witnessed Marian apparitions, beginning on Feb. 11, 1858. The shrine also holds a spring of water that is said to have miraculous healing properties.

While there have been more than 7,000 miraculous recoveries attributed to the intercession of Our Lady of Lourdes at the French shrine, the Catholic Church has confirmed a total of 70 medical miracles there, Whitaker reported.

Her miraculous cure took place after she joined a procession in Lourdes.

“I really had that feeling that the Lord was walking with us,” she recalled. “And I heard him giving me these words: ‘I see your suffering and that of your sick brothers and sisters. Just give me everything.’”

She remembered returning home feeling spiritually rejuvenated but worse physically. The religious sister spent three days in excruciating pain, she told Whitaker, before she suddenly felt the strength to walk to the chapel and pray.

“Then I felt some kind of heat coming into my body. I felt relaxed,” she said. “But I didn’t really know what that was meaning. And in my room, I heard this inner voice again telling me, ‘Take all your braces off.’ I didn’t think twice. And I started taking my foot brace off. And my foot that used to be crooked was straight. And I could actually put it on the ground without feeling any pain.”

She added: “I knew it was impossible.”

For his report, Whitaker visited the Marian shrine and the Lourdes Office of Medical Observations, where doctors and researchers undertake rigorous investigations into the validity of the miracles reported there.

“We did all that you would do in medicine to make absolutely sure of her [diagnosis]. And it was,” he said. On top of that, she saw two psychiatrists in Paris.

Afterward, de Franciscis sent her case to a group of 33 doctors and professors called the International Medical Committee of Lourdes to determine whether her cure was “medically unexplained.” They concluded that it was — after eight years of investigation.

“If tomorrow morning any of our viewers is a doctor, and one day he stops in southern France and comes to see me and wants to look into the file of Sister Bernadette, I’ll be delighted to show him,” de Franciscis said.

Ten years after her visit to Lourdes, in 2018, the Catholic Church recognized the case as the 70th miracle there.

Bishop Jean-Marc Micas of Lourdes explained to Whitaker: “Declaring a miracle is saying, ‘God did something.’ This is the miracle.” With temperatures expected in the teens and wind chills around zero in parts of the state, Catholic groups in Texas are ramping up efforts to help with food, supplies, and shelter. The Archdiocese of Guadalajara has joined the Jewish community to provide 40,000 Christmas dinners for the poor this Dec. 25 in an initiative called “10,000 Christmases in one.”