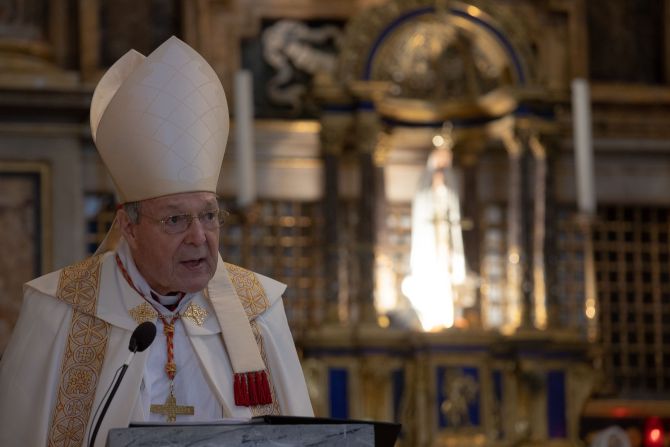 Cardinal George Pell leads Eucharistic adoration and a Eucharistic procession at the Pontifical University of St. Thomas Aquinas (the Angelicum) in Rome on May 18, 2021. | Daniel Ibanez/CNA

The funeral Mass of Cardinal George Pell will be held in St. Peter’s Basilica at 11:30 a.m. on Saturday, Jan. 14, the Vatican announced Thursday.

Pell, the prefect emeritus of the Secretariat for the Economy, died suddenly in Rome on Jan. 10 at the age of 81.

The funeral will be celebrated at the Altar of the Chair by Cardinal Giovanni Battista Re, the dean of the College of Cardinals, with other cardinals and bishops concelebrating.

Pope Francis will preside over the rite of Final Commendation and Farewell.

Following the funeral, Pell’s body will be brought back to Australia, where he will be buried in St. Mary’s Cathedral in Sydney.

A towering figure of the Church both physically and intellectually, Pell served for many years as archbishop of Melbourne and then Sydney before Pope Francis appointed him to lead the Vatican’s economy department in 2014.

Pope Francis praised the Australian cardinal’s witness, dedication, and faith in a condolence message on Jan. 11.

The pope said he recalled “with a grateful heart his consistent and committed witness, his dedication to the Gospel and the Church, and particularly his diligent cooperation with the Holy See in the context of its recent economic reform, of which he laid the foundations with determination and wisdom.”

George Pell was born on June 8, 1941, in Ballarat, a town in Victoria, to an English-born Anglican father and a devout Catholic mother of Irish descent.

In 2001 he was appointed archbishop of Sydney, where he served until being appointed by Pope Francis to take charge of the newly created Secretariat for the Economy and to lead efforts at reforming Vatican financial affairs in 2014.

The Australian was made a cardinal by Pope John Paul II in October 2003, while he was archbishop of Sydney. Ten years later, Pope Francis appointed Pell a member of his Council of Cardinals, and the year after, he put him in charge of Vatican finances.

In 2017, Pell left Rome for Australia to defend his innocence of abuse charges. After 404 days in prison he was ultimately acquitted in 2020. He returned to live in Rome on Sept. 30, 2020, his first visit back to the city since his trial and imprisonment.

Cardinal Pell’s prison journal, written while he was in solitary confinement, is being published in three volumes. He has said he could not offer Mass in jail because he was not allowed access to wine for use in the consecration.

In 2021, Pell turned 80 years old, losing his eligibility to vote in a future papal conclave.