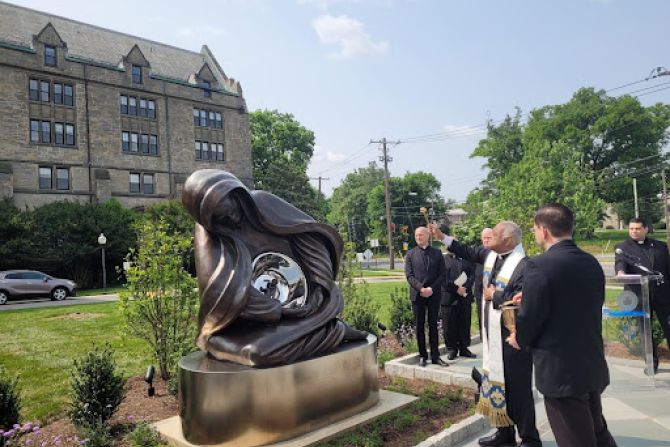 After someone broke into her house and violently attacked her husband, House Speaker Nancy Pelosi sought the services of a priest to perform an “exorcism” of the couple’s San Francisco home, her daughter told the New York Times.

“I think that weighed really heavy on her soul. I think she felt really guilty. I think that really broke her,” Pelosi’s daughter Alexandra Pelosi told opinion columnist Maureen Dowd. “Over Thanksgiving, she had priests coming, trying to have an exorcism of the house and having prayer services.”

Pelosi’s office did not respond to CNA’s request for comment by publication. According to the exorcist for the Archdiocese of Washington, any priest can “expel demons” from a house.

“A priest can only conduct a solemn exorcism of a person with the direct permission of his bishop,” Msgr. Stephen Rossetti, who is also a research associate professor at the Catholic University of America, told CNA Jan. 23.

“However, to expel demons from a place does not require any special faculties for a priest. As with any ministry of a priest, discretion and protecting the confidentiality of his people involved is expected and important,” Rossetti said.

The alleged assailant, David DePape, has pleaded not guilty to multiple state and federal charges, including assault and attempted murder. According to friends and neighbors, he had become enmeshed in internet conspiracy theories and political extremism, CNN reported. In October 2022 he reportedly entered the Pelosi home in search of then Speaker Pelosi in a plan to kidnap her but attacked her husband, Paul Pelosi, instead, causing a fractured skull and severe injuries to his arm and hands.

Pelosi told the New York Times she could not imagine seeing her home become “a crime scene.”

“This has been tough. It’s going to be about three or four more months before he’s really back to normal,” she said.

The Archdiocese of San Francisco, in which the Pelosis reside, said it was “unaware” of the exorcism.

“We would respect the privacy of families with regard to exorcisms and house blessings,” Peter Marlow, executive director for communications and media, told CNA Monday.

“Exorcisms and house blessings are not activities we would promote to the media,” he said. “If a parishioner is interested in a house blessing, they should contact a priest at their parish.

Marlow referred CNA to the U.S. Conference of Catholic Bishops’ discussion of exorcisms on its website. While “major exorcisms” are conducted on a person by a bishop or priest with the special permission of the local ordinary, “minor exorcisms” are used in the rite of baptism or in a series of prayers that may be used by the faithful, including “any demonic influence on places and things in particular.”

Rossetti told CNA that the exorcism of a place is “specifically used when there is a demonic infestation.”

“This typically happens when evil actions have been done in a place,” he said. “Some of the behaviors that we have found to result in a demonic infestation are homicides, drug dealing, abortions, sex trafficking, child abuse, and occult practices such as Satanism or witchcraft.”

Father Vincent Lampert, exorcist for the Archdiocese of Indianapolis, described to the New York Post a possible exorcism rite.

“It would be the recitation of a particular prayer, inviting the presence of God back into the house, casting out any presence of evil that may be there,” he said. “Then the house would be blessed with holy water, reminding us of our new life in Christ and the fact that we need not fear any evil, because recognizing that Christ is dwelling with us.”

Lampert said he gets “thousands” of requests for such prayers each year.

In the wake of the attack on Pelosi’s husband, Archbishop Salvatore Cordileone of San Francisco asked for people to join him in prayer “for the swift recovery of Paul Pelosi and comfort for his wife and family, too.”

Earlier last year, Cordileone publicly rebuked Rep. Pelosi because of her staunch support for abortion, warning that it causes scandal and endangers her soul.

“I asked her to repudiate this position or else refrain from referring to her Catholic faith in public and receiving holy Communion,” Cordileone said in May 2022, reporting that he had repeatedly sought to reach out but had received no response.

“We must keep fighting to enshrine Roe into law,” she said on Twitter. San Francisco and Los Angeles events brought out droves of participants to witness to the humanity of the unborn and the dignity of all life. Monsignor Stephen Rossetti started a TikTok channel last month after noticing the social media platform was introducing kids to something other than harmless videos.