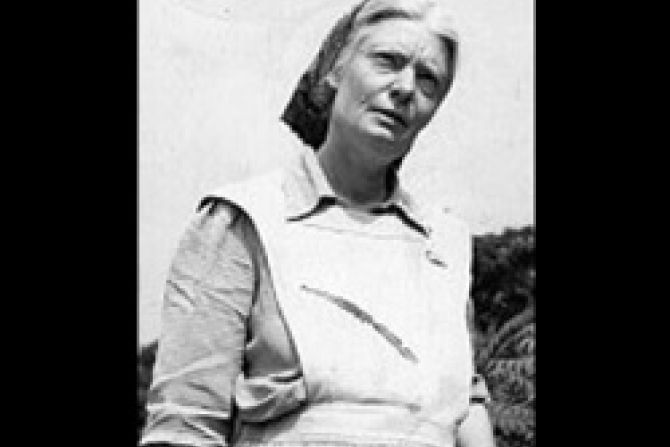 Dorothy Day in the late 1940s. Photo Courtesy of the Marquette University Archives.

The U.S. bishops heartily approved the advancement of the cause for canonization of Dorothy Day, a 20th century Catholic convert, pacifist and advocate for the poor.

"I'm more convinced than ever she's a saint for our time," said Cardinal Timothy M. Dolan of New York in a Nov. 13 press conference.

He explained that before her conversion, Day led an immoral life that included a pregnancy out of wedlock and an abortion.

"Her life, of course, like Saul on the road to Damascus, was radically changed when she became introduced to Jesus Christ and his Church," Cardinal Dolan explained.

After her conversion, Day "became an apostle – an icon – of everything wrong with what she did before and of everything right about the dignity of the human person and the sanctity of human life," he said.

The cardinal described Day as "a living, breathing, colorful, lovable, embracing, warm woman who exemplifies what's best in Catholic life" and shows the Church's commitment to both the dignity of human life and social justice.

Baptized in the Episcopal Church, Day lived her early years as a journalist as she toyed with communist ideas, attempted suicide and had an abortion.

After a profound conversion, she co-founded the Catholic Worker Movement and started soup kitchens, farm communities and a Catholic newspaper.

She dedicated her life to aiding and advocating for the poor, leading a life characterized by voluntary poverty, works of mercy and Scripture.

Day promoted pacifism and was a staunch defender of human dignity. She also supported distributism, an economic system largely developed by G. K. Chesterton as a "third way" between capitalism and socialism, relying upon widespread property ownership rather than ownership primarily by the state or by a small number of very wealthy individuals.

The U.S. bishops participated in a consultation on Day's sainthood cause on Nov. 13, the second day of their annual fall general assembly in Baltimore.

Church law regarding canonizations requires the diocesan bishop promoting a canonization cause to receive the consent of his regional body of bishops before moving forward. As the archbishop of New York, where Day lived out the latter part of her life and died in 1980, Cardinal Dolan is overseeing the cause.

Day is currently considered a "Servant of God," a title designated by the Vatican to indicate that it has no objections to her cause for canonization progressing.

The bishops strongly approved the advancement of Day's cause in a voice vote. Discussion during the meeting included several bishops recounting their experiences meeting Day or attending her funeral.

Cardinal Theodore E. McCarrick, archbishop emeritus of Washington, D.C., said that Day's life would be an inspiration to "people that are hard to get at," such as those living on the streets, struggling with drug abuse or coping with a past abortion.

"All these folks whose lives we need to touch in some special way – she was one of them," the cardinal said.

He called the cause for canonization "a tremendous opportunity" to reach out to these individuals, telling them that they can not only re-enter society and the Church, but that they can be saints.

Day's firm "commitment to the social Gospel of the Church and her love for the poor are things that resonate with our young people," added Cardinal Seán P. O'Malley of Boston.

He explained that after years of pain and spiritual searching, Day "found the solution for all the problems of life in Jesus Christ," making her "a magnificent model for our time."

Cardinal Francis E. George of Chicago commented that the Church needs "pacifists as witness to the kingdom of heaven not being carried away by violence, even as we recognize there are just wars because governments must defend their citizens."

He compared this dynamic to that of marriage, explaining that while most people are called to marry, the faithful need examples of those who live celibately to remind them that there will be no marriage in the kingdom of heaven.

"Her solution to the injustices of capitalism was the works of mercy," the cardinal added, noting Day's criticism of what she saw as the inherent totalitarianism of states.

"And as we struggle at this opportune moment to try to show how we are losing our freedoms in the name of individual rights, Dorothy Day is a very, very good woman to have on our side," he said.