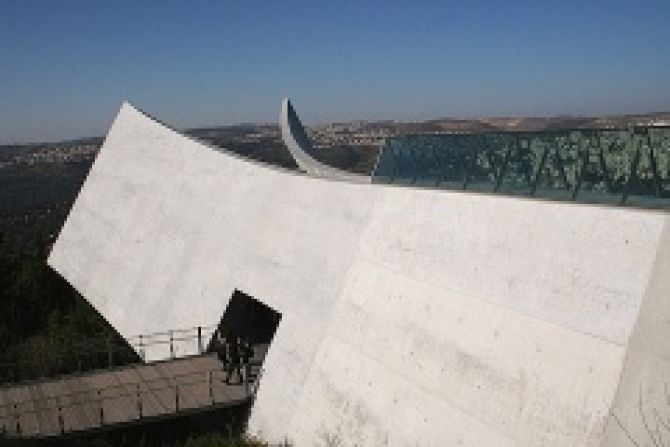 The entrance to the Yad Vashem memorial. | Ido Mor via Flickr.com (CC BY-NC-SA 2.0).

Israel's official Holocaust memorial Yad Vashem has named the World War II-era Archbishop of Florence, Cardinal Elia Dalla Costa, as "Righteous Among the Nations" for his help in rescuing hundreds of Jews from Nazi persecution.

Yad Vashem said on Nov. 26 that the cardinal "played a central role in the organization and operation of a widespread rescue network."

The Nazis began to deport Jews after the German occupation of Italy in September 1943. A major rescue effort in Florence was begun by the city's Jewish leader Rabbi Nathan Cassuto and Jewish resistance fighter Raffaele Cantoni. The operation soon became a joint Jewish-Christian effort, with the cardinal offering guidance.

Cardinal Dalla Costa recruited rescuers among the clergy and supplied letters asking monasteries and convents to shelter Jews. He sheltered Jewish refugees in his own palace for short periods before they could be taken to safety.

Yad Vashem said the cardinal was part of a network that helped save hundreds of local Jews and Jewish refugees from areas previously under Italian control.

Survivor Lya Quitt testified that she received help from the cardinal after she fled to Florence from France in September 1943. She was brought to the cardinal's palace and spent the night with other Jews sheltered there before rescuers took them to different convents in the city.

The cardinal died in 1961 at the age of 89. The cardinal's medal will be kept at the Yad Vashem memorial in Jerusalem.

Yad Vashem has honored over 24,000 people with the medal in recognition of their "extraordinary courage to uphold human values." Other Catholic honorees include Latvian priest Fr. Kasimir Vilnis, who was honored in 2008.

Controversy over the actions of the Catholic Church during the Holocaust has often focused on Pope Pius XII. Some critics contend the wartime Pope did not do enough to speak out against the persecution of Jews.

The Pope's defenders point to his numerous actions behind the scenes that helped save persecuted Jews.

Until earlier this year, the Yad Vashem memorial's exhibit on Pope Pius XII mainly echoed his critics, saying the Pope "did not protest" the murder of Jews.

The memorial has since changed the exhibit panel, citing recent research. It acknowledges the Pope's condemnation of ethnic persecution and the efforts of the Holy See to save Jews. It notes Pius XII defenders who say official Catholic neutrality prevented harsher measures against the Catholic Church and allowed more covert rescue efforts to succeed.

The exhibit still criticizes "a lack of clear guidance" and instances of silence from the Vatican during the Nazi era.