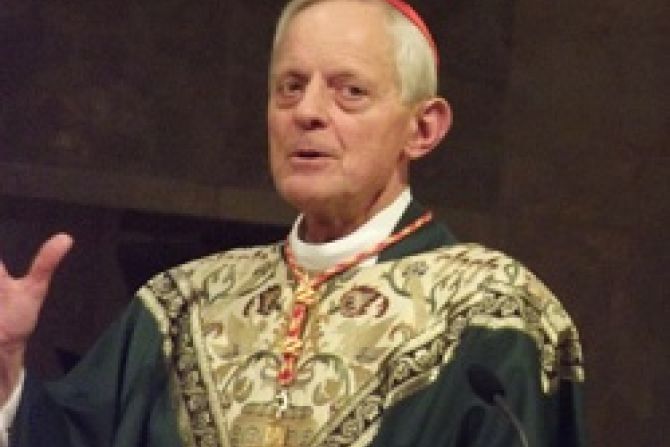 Joining in a global day of prayer for peace in Syria, Cardinal Donald W. Wuerl of Washington, D.C., urged Catholics to stand strong in their faith despite the threat of violence and evil in the world.

"The Church always calls us to prayer," Cardinal Wuerl said in his homily. "Particularly in moments of crisis we turn to prayer."

At this particular moment in history, he continued, we pray especially for "Syria and the Middle East, asking that God open them with the power of his love so that those hearts might be changed – so that the world might be changed."

A Mass for Peace and Justice was celebrated on Sept. 7 – the vigil of the Nativity of Mary, Queen of Peace – at the Basilica of the National Shine of the Immaculate Conception in Washington, D.C.

Archbishop Carlo Maria Viganò, apostolic nuncio to the United States, joined the cardinal at the liturgy, as a representative of Pope Francis.

The celebration of the Mass coincided with the beginning of the Vigil for Prayer at Saint Peter's Square in Rome.

Pope Francis called for the vigil as part of a day of fasting and prayer for peace in Syria as Western countries, including the United States, discuss the possibility of a military attack against the country after reports indicated that chemical weapons had been used on citizens.

The D.C. Mass allowed Catholics in the Archdiocese of Washington to unite themselves in prayer with the Pope and with the Universal Church.

At the Mass, Cardinal Wuerl prayed "for those who are a part of our human family and who endure terrible acts of violence," asking for "God's blessings on those who strive to contain violence around the world."

The cardinal also asked for peace for "those who suffer so mightily in the Middle East," as well as for the whole world.

He reminded the faithful that they "must never allow the violence that exists in the world to wound our inner conviction that Christ is 'the way, the truth and the life.'"

"What the Lord tells us is that we have the power within us to make this world a better place," he explained. "Our actions, while individual and seemingly small, play a part in the great cosmic struggle between good and evil, between light and darkness, between peace and war, between violence and harmony, between hatred and love."

"Jesus tells us that victory begins first in each human heart."

"Mindful that Jesus himself told us, 'Where two or three are gathered I am with them,' the Pope calls us to join him and the tens of thousands who are gathering at this very hour in Rome at Saint Peter's Square," he remarked.

"In uniting our prayer with that of our brothers and sisters throughout the Catholic world, our prayer truly becomes universal and a sign of hope for the world."