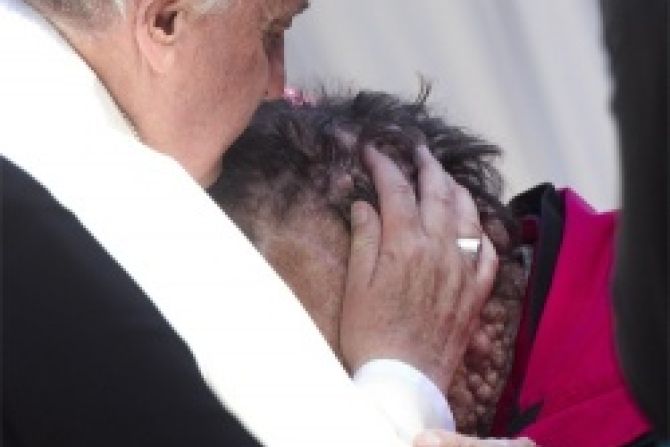 Pope Francis kisses a man suffering from boils in Saint Peter's Square at the end of his Wednesday general audience, Nov. 6 2013. | ANSA/CLAUDIO PERI.

At the end of the Nov. 6, 2013, general audience in St. Peter's Square, Pope Francis drew attention by warmly embracing a man who suffers from a rare disease causing neuronal tumors all over his body.

His name is Vinicio Riva, a 53-year-old Italian who has suffered from neurofibromatosis since he was 15. A few days ago he moved Pope Francis in a meeting that touched the world. He recently retold what happened and felt on Nov. 6 before the crowd gathered in St. Peter's Square.

Neurofibromatosis causes great pain and can result in impaired vision, learning impairnment, and even cancer, according to non-profit research group Mayo Clinic. Treatment of the condition is very complicated.

People with this disease – which is genetic and not contagious – often face discrimination because of their appearance.

In an interview with the Italian magazine Panorama, this native of the town of Vicenza says that upon meeting the Pope "first I kissed his hand, while he stroked my head and wounds with the other. Then he approached me and hugged me strongly. He kissed me on the face. My head was against his chest and his arms embraced me. He hugged me strongly."

As he carried out his typical greeting of pilgrims at the conclusion of the general audience, Pope Francis paused for several minutes to receive the sick man in his arms.

​​"I tried to speak, to say anything, but I couldn't: the emotion was very strong. It had been a little over a minute, but it seemed like an eternity to me. Then I turned to see my aunt and I said: here I leave the sorrows, the sorrows will stay here," he added.

Moments later, he took the man’s face in his hands, kissed him, and gave him a blessing.

"His hands were soft, soft and beautiful. His smile was welcoming. But what has impressed me the most is that he did not think about whether to hug me or not. I am not contagious but he did not know. He did it and that was it: he caressed my whole face and while he was doing it I only felt love,” he said.

With a voice almost whispering due to an operation on his throat, Riva remembers that day with emotion and assures that the Pope's gesture of love helped him to better cope with the pain caused by the wounds he has all over his body, caused by Recklinghausen disease, a rare disease known as type 1 neurofibromatosis.

Riva’s skin has lost all elasticity and the wounds cover his eyes but he can see. His feet have become deformed and are "devastated" by the sores, says Panorama. He is very itchy and every morning he wakes up with his cotton mesh soaked in blood. "The first signs appeared when I was 15 years old. They told me that I was going to die at 30, but here I am," he explained.

The gesture is the latest in a series of actions by the Holy Father that have drawn attention for their warmth and affection towards the marginalized in society. Previously, the Pope made headlines by visiting imprisoned youth, responding to letters with personal phone calls, and inviting the local homeless to dine at St. Peter’s Square. Continuing his efforts to promote a “culture of encounter” with the disabled, Pope Francis again embraced a severely disfigured man after his Nov. 20 weekly audience in St. Peter’s Square. Man with disfigured face recalls warmth of encounter with Pope

Oreste Tornani, a man with a severely disfigured face who was blessed by Pope Francis at a recent General Audience, says he felt very close to the Holy Father at their encounter. 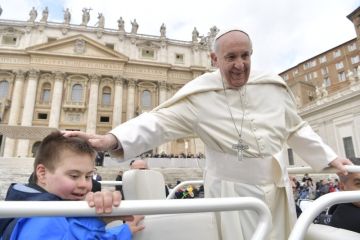 When Peter Lombardi was diagnosed with leukemia in 2015, his wish was to get a kiss from Pope Francis, but his family’s plans to see him at the World Meeting of Families in Philadelphia fell through when Peter was in the hospital.