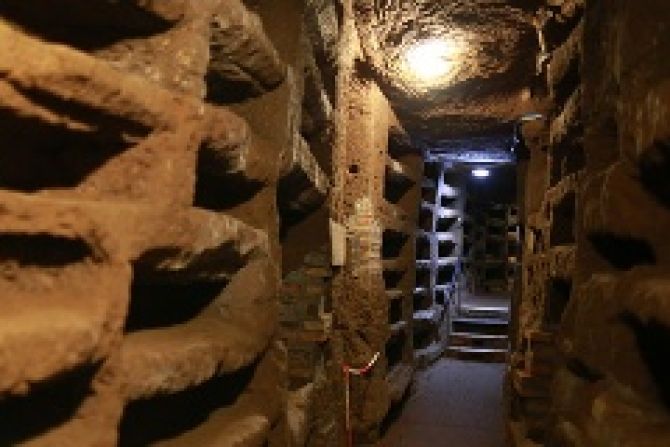 Tombs line the walls of the Catacomb of Pricilla beneath Rome, Nov. 20, 2012. | Andreas Dueren/CNA.

The internet's largest search engine has created a digital map of two large catacombs in Rome, hoping to expose users to the historical sites' beauty and spark curiosity to learn more about them.

"So our objective is actually to have more and more people knowing about world-wide culture, and for us Italian culture."

Albetino is the head of Google's public policy team in Italy, and was present for the Nov. 19 press conference announcing the new project, held in the Catacomb of Pricilla.

The Catacomb of Pricilla was used for Christian burials from late in the second century up through the fourth, and is filled with numerous wall paintings of Saints and Christian symbols, some of which are currently undergoing restoration.

It is believed that the catacomb is named after a woman called Pricilla, who is believed to be the wife of a man who converted to Christianity and was put to death by the Emperor Domitian.

Inspiration for the new map system detailing the catabombs, Albetino noted, came from "a big idea that google has, that is try to put in the web as much cultural contents as possible."

Catacombs originally came up as a topic of interest, the policy director revealed, during a meeting between Cardinal Ravasi, President of the Pontifical Council for Culture, and Google's executive chairman Eric Schmidt.

During the discussion of "how to enrich the world-wide web," Albetino noted that "the idea was, ok, there are incredibly valuable contents, such as for instance, the catacombs, why don't we put it on maps? And that's how it started."

So far the Catacombs of Pricilla and the Dino Companion catacombs are the only two available on Google maps, and although there are "no clear plans in terms of catacombs in the future," Albetino explained that they are important, especially in Italian culture, because they "tell you something about our history, and also where we come from."

Fabricio Bisconti, the Archeological Superintendent of the Catacombs for the Pontifical Commission of Sacred Archeology, also spoke with CNA on Nov. 19, stating that another key motive in creating the map was to give "virtual tour for the disabled."

Those who "cannot access" the catacombs due to some "great handicap," he observed, ought to have the ability to be exposed to their beauty as well, adding that "this was our first motive."

Albetino revealed that another "fantastic project" that Google is working on in the area of Italy, is "to digitize all the books of the three main libraries, Naples, Rome and Florence, and to make it available to the world-wide web, and then also to digitize the biggest museums with the same purpose."

The goal of all these projects, she noted, is to "show to the world the beauties that we have."

The new map of the catacombs can be viewed here.