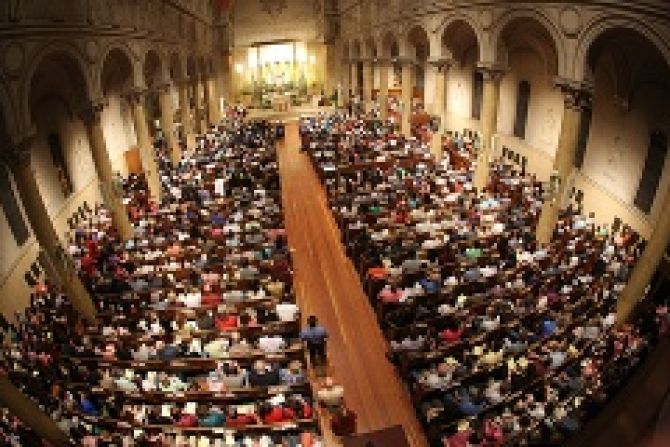 Amid the last-minute cancellation of a planned satanic black mass re-enactment, some 2,000 people gathered on Harvard's campus to take part in a May 12 Eucharistic procession and adoration.

"This is essentially the best response we could have asked for as a diocese," Harvard student and Catholic Students Association president Todd E. Jones told school newspaper The Harvard Crimson.

The publication said Catholics were joined by Christians and other supporters from the Boston area, "carrying crosses and singing the words 'Jesus, I adore you.'"

A Eucharistic procession began at MIT and ended at St. Paul's Church in Harvard Square, where a Holy Hour was then held.

Diocesan newspaper The Boston Pilot estimated that there were approximately 2,000 people in attendance. One student, a senior at Harvard, told The Harvard Crimson she had never seen the church so full.

University president Drew G. Faust was among those in attendance, the Boston Globe reported. Faust had earlier that day voiced her intent to be present at the Eucharistic holy hour as a sign of respect for the Catholic community.

In her May 12 statement, the university president had condemned the black mass re-enactment as "flagrantly disrespectful and inflammatory," saying that the decision by the Harvard Extension Cultural Studies Club to host it was "abhorrent." However, she said the ceremony would be permitted for the sake of "free expression."

Although the black mass re-enactment was initially scheduled to take place on campus, The Harvard Crimson reported late on the afternoon of May 12 that the event had voluntarily been moved to The Middle East nightclub, a short distance from campus.

However, shortly afterward, the general manager of the nightclub told the publication that negotiations had fallen through and the event would not be hosted there.

Subsequently, in a breaking news update at 7:45 p.m. Eastern time, the publication reported that the black mass "has been postponed indefinitely and will not take place tonight, according to (a) Satanic Temple spokesperson."

It was later reported that a smaller version of the event may have been held elsewhere.

The plans for the black mass had been met with widespread opposition from students, alumni and the broader Catholic community. The Archdiocese of Boston had spoken out against the event, and Catholic groups across the country and internationally had planned Masses, holy hours and prayers of reparation for it.

Harvard senior Aurora Griffin told CNA that she presented university president Drew Faust with petitions against the event that had garnered more than 60,000 signatures.

In her cover letter, Griffin explained that the event does not promote an appreciation for cultural understanding, but instead "promotes contempt for the Catholic faith," adding that "supporters of genuine tolerance and  civility are rightly offended and outraged that Harvard has permitted such an event."

Adding to the controversy were statements by a spokesperson for The Satanic Temple, which was to stage the event, claiming that a consecrated host would be used. While the temple and the Cultural Studies Club both later denied this, insisting that only a plain piece of bread would be used, some critics voiced doubt.

The Cultural Studies Club had defended the black mass re-enactment, saying that those were offended held views that were "arrogant and egocentric." The group argued that its critics' beliefs were "based on intolerance and ignorance," calling them outdated, paranoid and presumptuous.