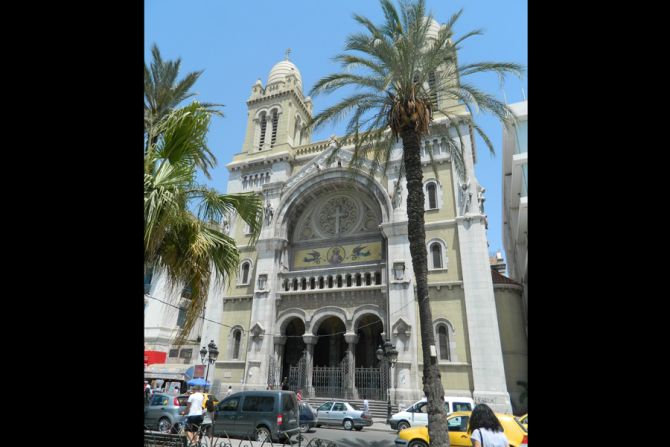 St. Vincent de Paul Cathedral in Tunis. | Aid to the Church in Need.

In Tunisia, public expressions of Christianity are against the law and the government frowns on conversions. But compared to the situation of the Church in other Muslim nations, circumstances in the North African country are tolerable.

"The Catholic Church in Tunisia can do its work without political problems, thank God. The authorities know that we have nothing to hide and that our charitable institutions are here to serve the Tunisian people," Father Sergio Perez said in an interview with international Catholic pastoral agency Aid to the Church in Need.

The Argentine belongs to the religious order "Institute of the Incarnate Word" (IVE). He has been working as the parish priest of the Cathedral of Tunis for the last four years.

"The Catholic Church is the only religious community in the country that has an agreement with the state," he observed. That agreement was concluded by the Holy See and Tunisia in the 1960s.

"It gives us legal certainty, but also brings restrictions. According to this modus vivendi, public expressions of the Catholic faith, such as processions, are not allowed. On the whole, this agreement also prohibits any form of proselytizing."

Fr. Perez considers the country's new constitution, which was approved in January of this year, to be step in the right direction.

"It not only guarantees freedom of worship, but also real freedom of conscience. This includes religious conversions, such as those from Islam to Christianity. This would be inconceivable in many Islamic countries."

"Of course, theory and practice are two very different things. But these are still very new policies. We will have to see how things develop," the missionary said.

"Thanks to Pope Francis, more and more people are becoming interested, especially those who follow Islam more for cultural than for religious reasons. This is also happening in Algeria and some other countries."

Nonetheless, the priest views the large number of Tunisians who have joined jihadist groups with concern. Even so, he said, "Christians have not felt any threats from jihadists yet. The extremists are more menacing toward Tunisians who are considered too liberal" in their practice of Islam. Fr. Perez insists, moreover, that jihadism is a foreign import, lacking roots in the country.

The composition of Tunisia's Christian community, which is almost exclusively made up of foreign nationals, has greatly changed in the last few years.

"This has something to do with the fact that several hundred Christian families from Sub-Saharan Africa have left the country, along with the exit of the African Development Bank. These had temporarily settled here in after being forced to leave the Ivory Coast in 2003 for reasons of safety. The Bank has now returned to the Ivory Coast, taken its Christian employees along. A number of our parishes have deeply felt this loss of part of their community. However, we still have many Christian students here from Sub-Saharan Africa, to whom we provide pastoral care."

The Catholic Church is the largest single Christian denomination in Tunisia; the Archdiocese of Tunis serves the entire country. Various religious orders help to further the charitable mission of the Church, and maintain schools, student residence halls and medical facilities.

There are a number of smaller Protestant as well as Orthodox communities. In 2012, the number of Christians in Tunisia was estimated to be about 25,000, with Catholics accounting for 80 percent of the total. Official records are not kept.


Oliver Maksan is a reporter for Aid to the Church in Need, an international Catholic charity under the guidance of the Holy See, providing assistance to the suffering and persecuted Church in more than 140 countries. www.churchinneed.org (USA); ; www.acnuk.org (UK); www.aidtochurch.org (AUS); www.acnireland.org (IRL); www.acn-aed-ca.org (CAN) www.acnmalta.org (Malta)