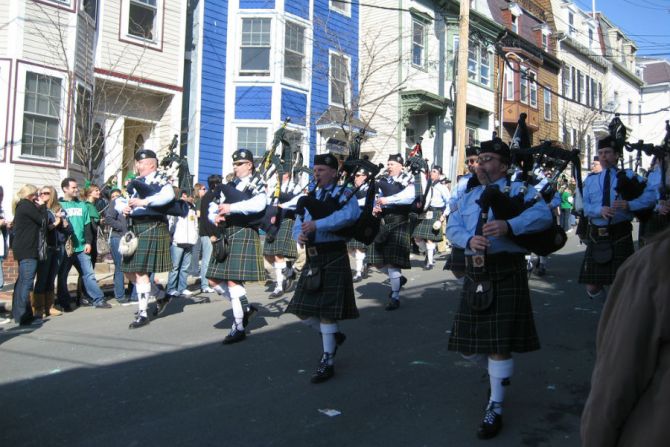 The Massachusetts Knights of Columbus withdrew from the St. Patrick’s Day Parade in Boston on Sunday, saying that their motives for participating in the parade - which this year included a gay activist group - have been misrepresented.

The Knights asked people to pray during the march in honor of St. Patrick, who was famous for bringing Christianity to pagan Ireland.

A statement released by the Knights said that they had intended to march in the parade “as a Catholic witness, to honor this great Catholic saint, and in gratitude for the contributions of Irish Americans to our country.”

The organization said that it had wanted to run a float with both pro-life signs and other posters encouraging participation in charitable activities.

However, a source close to the situation told CNA that the Knights were ambushed by a campaign that smeared their motives and created confusion.

C.J. Doyle, executive director of Boston’s “Catholic Action League,” alleged that the Knights were acting “treacherously” and that their actions were actually “helping (the activist group) spread their message.”

Doyle said that the Knights were colluding to give cover to the parade’s organizers and Boston’s mayor for the parade’s inclusion of a homosexual advocacy group. He pointed to the fact that the mayor’s hometown of Dorchester was also the town in which the Massachusetts leader of the Knights of Columbus resided.

But CNA’s source said that the allegations were false and that the Knights had not been contacted about the situation or asked for clarification.

“The fact is that Doyle and his group created a scandal,” the source said. “The Knights were marching in defense of the faith, and did not want to leave the parade because they wanted someone in the parade to continue to stand for Church teaching. They believed that pulling out of this parade would abandon it entirely to non-Catholic elements, and that this would not be helpful to the evangelization of the people of Boston.”

“But in the end, Doyle and his group generated so much misinformation and so many attacks that the good the Knights were trying to do was literally overwhelmed by his claims.”

Doyle had encouraged his followers to contact the Knights and complain, and according to one source, many did, with profanity-laced phone calls and social media posts.

“The lack of charity by these people who called themselves Catholics was stunning,” someone who knew several of the Knights receiving the calls told CNA. “And it didn't help that groups like MassResistance and the Michael Voris' Church Militant picked these allegations and ran them uncritically.”

In response, the Massachusetts Knights’ state council released a statement saying that “certain groups have chosen to misrepresent our reason for marching, insisting that we were participating in the parade to support another group or for political reasons. Such allegations are complete fabrications and have no basis in reality whatsoever.”

“Because the parade has become politicized and divisive, and because of the misrepresentation of our motive for participating, we will not be marching in this year’s parade. Instead we invite Catholics to join us in prayer to celebrate St. Patrick during the hours of the parade.”

The statement also said, “The Massachusetts State Council of the Knights of Columbus had planned to march in the 2015 parade … in the belief that the St. Patrick’s Day Parade would be an occasion for unity and celebration in the city of Boston. We deeply regret that some have decided to use this occasion to further the narrow objectives of certain special interests, which has subjected this occasion to undeserved division and controversy.”

One Catholic official in New England suggested that the effect of this campaign could be chilling for any Catholic group trying to evangelize in a public forum.

“What is now clear to Catholics in Boston is that if your strategy for spreading the faith differs from someone like Doyle’s, they will attack you personally, will unleash their angry and uncharitable followers, and won’t let the facts get in the way of their agenda.”