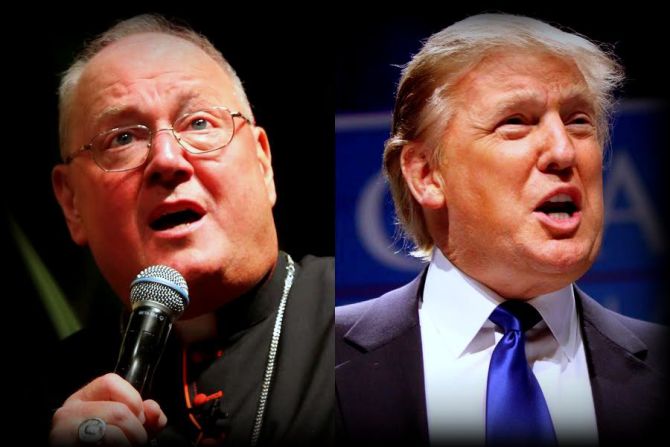 For Cardinal Dolan, the "virulent strain" of American nativism is not a thing of the past – it's alive, well and seeded in presidential candidate Donald Trump's recent remarks on the topic of immigration.

"Nativists believed the immigrant to be dangerous, and that America was better off without them," Cardinal Timothy Dolan of New York said in a July 29 guest column for New York Daily News.

"All these poor degenerates did, according to the nativists, was to dilute the clean, virtuous, upright citizenry of God-fearing true Americans."

Cardinal Dolan's column is in response to several offensive comments made on multiple occasions by Republican presidential candidate Donald Trump about Mexican immigrants.

The cardinal recalled how before becoming a bishop he taught American religious history to university students, dedicating a portion of the class to "the ugly phenomenon called nativism."

He offered a brief outline of nativism in America, noting its appearance in the 1840s and 1850s under the popular political party "the Know-Nothings." It appeared again, he observed, in the 1870s as the American Protective Association and in the 1920s as the KKK.

Finally he pointed to post-World War II America, naming the Protestants and Other Americans United for Separation of Church and State group as nativists.

Although his students might argue that the days of bigotry and belief that immigrants are nothing more than "dirty, drunken, irresponsible, dangerous threats to clean, white, Protestant, Anglo-Saxon America" are gone, the cardinal begs to differ.

"I wish I were in the college classroom again, so I could roll out my 'Trump card' to show the students that I was right. Nativism is alive, well – and apparently popular!"

Trump, in his speech launching his presidential campaign, had said that "the U.S. has become a dumping ground for everybody else's problems. And these aren't the best and the finest."

"I speak to border guards, and they tell us what we're getting. And it only makes common sense. They're sending us not the right people," he said, adding that these immigrants don't only come from Mexico, but also from South America and likely the Middle East.

In a June 28 interview with CNN Trump spoke of making Mexico build a wall along the U.S.-Mexican border, saying that a wall is needed in certain areas.

He said he would force Mexico to build the wall "because we give them a fortune. Mexico makes a fortune because of us. A wall is a tiny little peanut compared to that. I would do something very severe unless they contributed or gave us the money to build the wall."

In his column, Cardinal Dolan described nativism with the same words as scholar and author Ray Allen Billington, calling it "organized, white, Protestant antagonism toward the Catholic immigrant."

He said that he is not telling anyone who they should vote for, but stressed that as a Catholic "I take seriously the Bible's teaching that we are to welcome the stranger, one of the most frequently mentioned moral imperatives in both the Old and New Testament."

The cardinal then pointed to two attitudes toward immigrants described by various American historians, the first being the nativists.

These people "sadly… (view) the unwashed, ignorant, bothersome brood as criminals and misfits who threaten 'pure America,' and are toxic to everything decent in the United States."

However, the second, "more enlightened and patriotic" approach sees the immigrant as a gift to the nation, realizing that Native Americans are the only citizens whose ancestors were not immigrants.

The second group still recognizes the need for border control, fair regulation and prudent policies, but "we are wise to consider the immigrant as good for our beloved nation," the cardinal said.

"To welcome them is virtuous, patriotic and beneficial for the economic and cultural future of our country."

As a Catholic, the cardinal admitted to being "a bit biased" toward immigrants, and expressed his eagerness to share the work Catholic Charities in New York is doing to assist immigrants with Pope Francis during his September visit to the United States.

American patriotism and Catholicism have always been slightly at odds with each other in the United States, he said.

Dolan referred to how poet Walt Whitman called his predecessor Archbishop John Hughes a "mitred hypocrite" for an American, due to his defense of his "poor Irish immigrant flock – the Mexicans of his day – from the nativists."

He then noted how Whitman himself referred to immigrants as "these dregs of foreign filth, refuse of convents, scullions from monasteries."

"Thank God Walt Whitman stuck to poetry, and did not run for President."