Pope: Divorce and remarriage contradicts the sacrament, but Church always reaches out 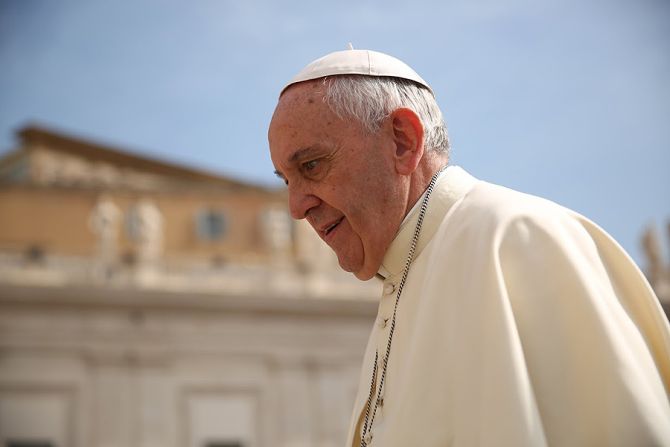 Echoing his predecessors on the need to care for divorced and remarried persons, Pope Francis said Christians should help these persons integrate into the community rather than treating them as though they are excommunicated.

"The Church well knows that such a situation contradicts the Christian Sacrament," the Pope said in his Aug. 5 General Audience at St. Peter's Square. Nonetheless, he added, the Church should always approach such situations with a "mother's heart; a heart which, animated by the Holy Spirit, seeks always the good and the salvation of the person."

"It is important that they experience the Church as a mother attentive to all, always disposed to listen in encounters."

The community is to welcome persons who have divorced and entered into new unions, the Pope said,  that "they may live and develop their adherence to Christ and the Church with prayer, listening to God's word, frequenting the liturgy, the Christian education of their children, charity, service to the poor, and a commitment to justice and peace."

Pope Francis made these remarks in his first General Audience since his summer break, picking up where he left off in his ongoing series of catecheses about the family.

Since last autumn, the Roman Pontiff has been centering his Wednesday catecheses on the theme of family as part of the lead-up to the World Day of Families in September, and the Synod on the Family in October.

In stressing the complexity of the pastoral care of those who have entered unions without having received an annulment of their marriage, Pope Francis turned to his immediate predecessors, St. John Paul II and Benedict XVI, both of whom had addressed this problem.

Pope Francis went on to stress how in recent decades, under the guidance of his predecessors, the Church has come to an increased awareness of the need for "fraternal and attentive welcome, in love and in truth" of those who have entered a new union following the failure of their marriage.

For instance, the Pope cited Benedict XVI who, in a question and answer period during the 2012 World Meeting of Families, acknowledged there were no "simple solutions."

He also cited St. John Paul II's 1981 apostolic exhortation on the family, Familiaris consortio, calling on pastors to "exercise careful discernment of situations" (84) in caring for couples who have attempted to remarry without having obtained an annulment – giving the example of the difference between someone who caused the separation, and who suffered it.

One of the areas of particular concern, the Pope said, pertains to the children affected by such complex family situations, for they are who suffer the most.

"If we then look at these unions with the eyes of the small children," the Pope said, "we see the even more urgency for developing, within our communities, a real welcoming of persons who live in these situations."

"How can we entrust these parents to do everything to educate their children in the Christian life, to give them the example of convicted and practiced faith, if we keep them at a distance from the life of the community, as if they were excommunicated?"

"These persons are by no means excommunicated," the Roman Pontiff stressed, "and they should absolutely not be treated as such: They are always part of the Church."

Excommunication is a medicinal penalty, and an excommunicated person cannot have a ministerial participation in worship; celebrate or receive the sacraments; or exercise ecclesiastical offices, ministries, or functions.

The divorced who have remarried cannot, however, be admitted to Eucharistic Communion because "their state and condition of life objectively contradict that union of love between Christ and the Church which is signified and effected by the Eucharist," St. John Paul II taught in Familiaris consortio.

Pope Francis said that in caring for people who are divorced and remarried, Christians should take their example from the Good Shepherd, an image which, he said, summarizes Christ's mission to "give his life for his sheep."

"This attitude is also a model for the Church, who welcomes her sons as a mother who givers her life for them."

The Pope stressed that "all Christians are called to imitate the Good Shepherd."

"Christian families can collaborate with him in taking care of wounded families, accompanying in the community's life of faith. Each must his part to assume the attitude of the Good Shepherd, who knows every one of his sheep, and excludes no one from his infinite love!"

This year's Synod on the Family, to be held Oct. 4-25, will be the second and larger of two such gatherings to take place in the course of a year. Like its 2014 precursor, the focus of the 2015 Synod of Bishops will be the family, this time with the theme: "The vocation and mission of the family in the Church and the modern world."

The 2014 meeting became the subject of widespread media attention, largely owing to proposals by a small number of prelates to rethink the Church's practice regarding the admission to Holy Communion for divorced persons who have remarried without having had their marriage recognized as null.