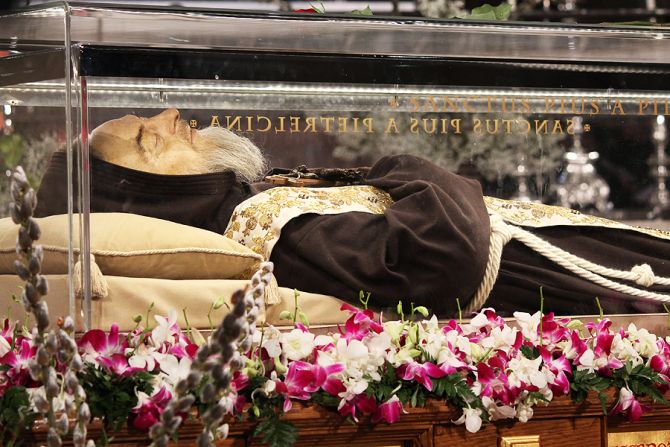 Urns containing the relics of Saint Padre Pio of Pietrelcina and Saint Leopold Mandic arrived to Rome's basilica of St. Lawrence Outside the Wall Feb. 3.

They will remain for a week of vigils, Masses and stops at several Roman churches, including St. Peter's Basilica, before returning to their usual place of repose.

Both members of the Order of Friars Minor Capuchin founded by St. Francis of Assisi, more commonly known as "Franciscans," the saints lived during the same time period, and were both canonized by St. John Paul II.

After the Mass, the urns containing the relics of the two saints will then be taken in a walking procession to St. Peter's Basilica. The procession will journey the entire length of Via della Conciliazione, the large street leading up to St. Peter's.

Padre Pio's body will be placed at the basilica's Altar of the Confession until Feb. 11, where pilgrims can come to venerate the saint during the basilica's usual operating hours, between 7 a.m.-7 p.m.

Perhaps one of the biggest highlights of having the relics in St. Peter's is that they will be present for the Feb. 10 commissioning of the Jubilee missionaries of mercy, who will concelebrate Ash Wednesday Mass with the Pope inside the basilica.

Numerous other events are also set to take place during the period the relics are in Rome, including a Feb. 6 papal audience with members of "Padre Pio prayer groups," workers at the Home to Relieve Suffering – founded by St. Pio in 1956 – and faithful from the Manfredonia-Vieste-San Giovanni Rotondo archdiocese.

After Mass Feb. 11 for the feast of Our Lady of Lourdes, which will be presided over by Archbishop Rino Fisichella, Prefect of the Pontifical Council for the Promotion of the New Evangelization, St. Pio's relics will be taken for three days to Pietrelcina for the first time since he left as a young priest.

At a Jan. 29 press briefing on the arrival of the relics, Archbishop Fisichella said that their presence in Rome "is of great significance for it is an unprecedented event, given the stories of these two saints who spent their lives in the service of the mercy of God."

In a Jan. 29 interview with CNA, Archbishop Fisichella, President of the Pontifical Council for the Promotion of the New Evangelization, said the presence of the saints' bodies is "an exceptional event," particularly because they will come during an extraordinary jubilee.

"The desire of the Holy Father was to give all the priests in the world, but especially to the missionaries of mercy, a sign," he said, adding that "where can we find a better sign of sanctity, of holiness, of dedication, total dedication to confession (than) in Padre Pio and in Padre Leopoldo?"