Pope: When giving to the poor, look them in the eyes 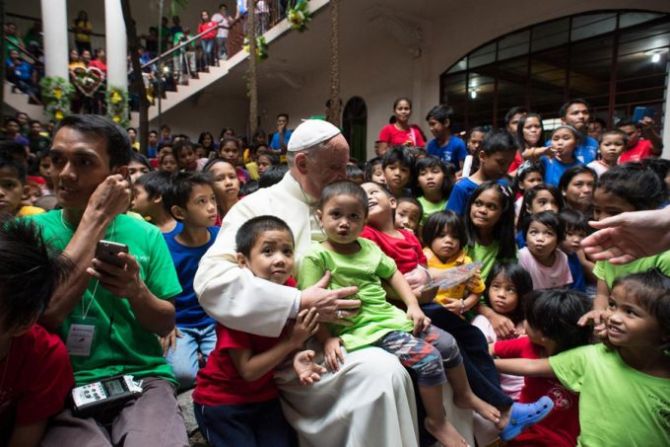 Pope Francis met with street children during his visit to the Philippines on Jan. 16, 2015. | ANSA/OSSERVATORE ROMANO.

In Saturday's address for the monthly Jubilee of Mercy general audience, Pope Francis said almsgiving is not just about the money; it is about being attentive to the actual needs of the person asking for help.

"Almsgiving is a gesture of love which directs us toward those we meet," the Pope said in his catechesis. "It is a gesture of sincere attention to those who come to us and ask our help."

"We should not identify almsgiving simply with a (hastily given) monetary offering" he said, "without looking at the person, and without stopping to talk, to understand what they really need."

In off-the-cuff remarks, the Pope challenged the faithful as to whether they are able to "stop and look in the face, look in the eyes, of the person who is asking for my help."

The April 9 gathering in St. Peter's Square was the latest in a monthly series of special audiences for the Holy Year of Mercy, which are held in addition to the weekly general audiences.

The Jubilee of Mercy is an Extraordinary Holy Year that officially commenced December 8 – the Solemnity of the Immaculate Conception – with the opening of the Holy Door in St. Peter's Basilica. It will close Nov. 20, 2016 with the Solemnity of Christ the King.

Almsgiving "must carry with it all the richness of mercy," the Pope said in his catechesis, observing that the Italian word for alms – "elemosina" – is derived from the Greek and references "mercy."

"Just as mercy has a million paths, a million processes, so too almsgiving is expressed in many ways to alleviate the disadvantages of all those in need."

Francis cited examples from Scripture of the importance of giving alms.

"God demands particular attention (be given) to the poor," he said: the "destitute, foreigners, orphans, and widows."

Citing a passage from Deuteronomy on giving alms – "You shall give to him freely, and your heart shall not be grudging" - he explained how giving to those in need requires "an attitude of interior joy."

Almsgiving should not be seen as a "weight or annoyance from which we free ourselves hastily," he said.

Speaking off-script, the Pope spoke on the hesitancy to give money to the poor on the argument that they will just use it "to buy wine get drunk."

"But if he is drunk, it is because he does not have another path!" he said.

"And you, what do you do in hiding, that no one sees? And you judge that poor man who asks for a coin (to buy) a glass of wine?"

Francis turned his catechesis to the Gospel, citing Jesus admonishing us not to give to the poor in order to receive "praise and admiration."

Speaking once again off-the-cuff, the Pope observed that almsgiving should be a sacrifice. He recalled an anecdote of a woman who taught her three young children to always give alms to those who asked. A poor man once approached the children while they were eating, and begged for food. The mother told the children to give half of their meal to the man.

This is an example of being "involved with the poor," he said. "I am depriving myself of something of mine to give to you.

"And I say to parents: educate your children so give alms, to be generous with what they have."