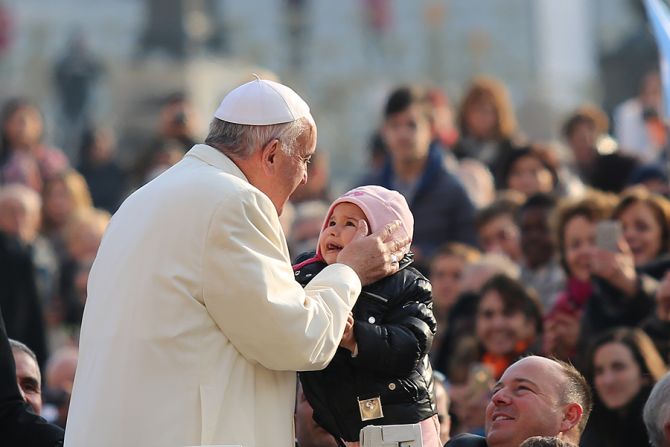 Addressing a global summit on humanitarian aid, Pope Francis offered encouragement and a reminder – don't ever forget that each suffering person you encounter has a name.

"'Leaving no one behind' and 'doing one's very best' demands that we do not give up and that we take responsibility for our decisions and actions regarding the victims themselves," he said to the World Humanitarian Summit meeting May 23 in Istanbul.

"No one loves a concept, no one loves an idea. We love persons. Self-sacrifice, true self-giving, flows from love towards men and women, the children and elderly, peoples and communities… faces, those faces and names which fill our hearts," he said.

At least 130 million people are in need of humanitarian aid around the world, while about 60 million people are displaced by conflict each year, the U.N. estimates. There is also a $15 billion shortfall between aid pledged and aid that is actually delivered.

"Our collective unwillingness to prevent or prepare adequately for disasters is a systemic moral failure," he said. "It is the time to reform the global humanitarian system."

Callahan said CRS, the U.S. branch of Caritas Internationalis, is working to cooperate with local partners and promote peace, while cultivating the ability to "transition quickly between disaster preparedness, response, recovery, and development."

"Our comprehensive approach provides urgent lifesaving assistance with a focus on full recovery – respecting people's inherent dignity, helping them get back on their feet, and strengthening their long-term resilience," he said.

"We call on all stakeholders to contribute to systemic reforms that both ends need and improves global humanitarian action."

Cardinal Parolin addressed the summit in several sessions. His remarks in the leader's session said heavy reliance on military intervention and "selfish" economic policies is "shortsighted, counterproductive and never the right solution for these challenges."

He urged better education to encourage respect for the human person and to help prevent genocide.

"The Holy See is doing its part to build a real and concrete fraternity, among peoples and nations," he said.

During a leadership roundtable to prevent and end conflicts, Cardinal Parolin said the Holy See is "firmly convinced of the fundamentally inhumane nature of war and of the urgent necessity to prevent and to end armed conflicts and violence among peoples and States."

"The Holy See is committed to advocating for the protection and proper assistance to forced migrants, internally displaced peoples and victims of trafficking, and to working to find durable solutions and reconcile communities," he said.

In his message to the summit, Pope Francis voiced hope that the gathering would make real contributions to lessen the sufferings of millions of people. He called for "a true and profound respect" for those who suffer due to violence, persecution, natural disasters and other calamities.

He especially noted the victims who are most vulnerable and live "in conditions of misery and exploitation."

He asked the summit: "Let us hear the cry of the victims and those suffering. Let us allow them to teach us a lesson in humanity. Let us change our ways of life, politics, economic choices, behaviors and attitudes of cultural superiority."

"Learning from victims and those who suffer, we will be able to build a more humane world," he continued.

The Pope also noted the obstacles to peace.

"We cannot deny that many interests today prevent solutions to conflicts, and that military, economic and geopolitical strategies displace persons and peoples and impose the god of money, the god of power," he said. "At the same time, humanitarian efforts are frequently conditioned by commercial and ideological constraints."

He called for a renewed commitment to "protect each person in their daily life and to protect their dignity and human rights, their security and their comprehensive needs."

The Pope also recognized relief workers who "serve their neighbor and contribute to consoling the sufferings of the victims of war and calamity, of the displaced and refugees, and who care for society, particularly through courageous choices in favor of peace, respect, healing and forgiveness."

"This is the way in which human lives are saved," he said.