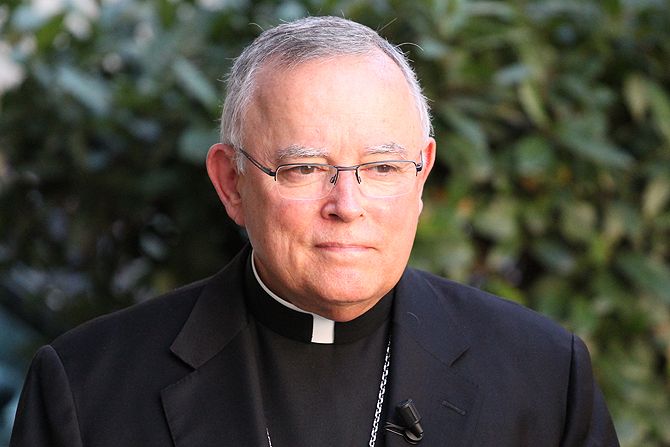 Archbishop Charles Chaput of Philadelphia described as "misleading" an article claiming that his leadership of a working group on the Pope's most recent document "sends a signal" regarding U.S. policy on Communion.

"Our 'committee' is very ad hoc and may exist for only three or four months," Archbishop Chaput told CNA June 1.

"Our goal is to gather what the bishops of the USA are doing and share that information with the other bishops, and then also send a report to Cardinal (Lorenzo) Baldisseri who has asked for reports from the various conferences."

In a June 1 article, the Catholic Herald reported that Archbishop Chaput had been named chairman of a five-bishop committee that was working on behalf of the U.S. Conference of Catholic Bishops for a positive reception and implementation of Pope Francis' recent apostolic exhortation, Amoris Laetitia.

"The news sends a signal on the question of admitting divorced and remarried people to Communion," the Catholic Herald said, citing instances in which Archbishop Chaput has affirmed Church teaching on the subject.

However, Archbishop Chaput said that the Catholic Herald's characterization was not entirely accurate.

"There is no policy dimension to what we are doing," he said. "The bishops in the group are currently the chairmen of various committees and I am the chair-elect of the committee on Laity, Marriage, Family and Youth."

Amoris Laetitia, released April 8, is the conclusion of a two-year synod process discussing both the beauty and challenges of family life today.

While much of the Western secular media focused its coverage on homosexuality and the question of communion for the divorced-and-remarried, actual topics discussed in the meetings were much broader, with synod fathers touching on themes such as domestic violence, incest and abuse within families, and marriage preparation.

Both of the synods sparked controversy amid speculation over whether there would be a change in the Church's practice that the divorced-and-remarried may not receive Communion. In accordance with the words of Jesus that "anyone who divorces his wife and marries another commits adultery," the Church says that those living in adultery – or any other unrepentant grave sin – may not receive Communion.

Pope Francis did not make any changes to Church teaching in the document, but one of its chapters – dealing with those in irregular marriage situations – has been the subject of much post-synod debate.

Vague language in the chapter has allowed a variety of interpretations. Cardinal Gerhard Muller, prefect of the Congregation for the Doctrine of the Faith, maintains that it does not change the Church's discipline on admission of the divorced-and-remarried to Communion.

Cardinal Walter Kasper, on the other hand, has said it "opened a door" to admitting the divorced-and-remarried to Communion, and that the document marks the "turning of a page" in the Church's history "after 1,700 years."

However, the matter was dealt with explicitly by St. John Paul II, who wrote that "the Church reaffirms her practice, which is based upon Sacred Scripture, of not admitting to Eucharistic Communion divorced persons who have remarried. They are unable to be admitted thereto from the fact that their state and condition of life objectively contradict that union of love between Christ and the Church which is signified and effected by the Eucharist."