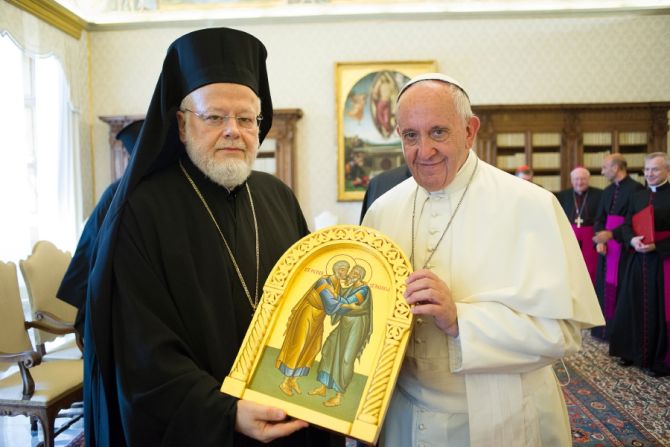 Pope Francis with the delegation from the Ecumenical Patriarche of Constantinople in Vatican City, June 28, 2016. | L'Osservatore Romano.

Catholic and Orthodox Churches find unity in God's mercy and in the responsibility to spread the Gospel, Pope Francis said Tuesday to a delegation from the Ecumenical Patriarch of Constantinople.

"Acknowledging that the experience of God's mercy is the bond uniting us means that we must increasingly make mercy the criterion and measure of our relationship," the pontiff said during the June 28 audience at the Vatican.

"If, as Catholics and Orthodox, we wish to proclaim together the marvels of God's mercy to the whole world, we cannot continue to harbor sentiments and attitudes of rivalry, mistrust and rancor."

"For divine mercy frees us of the burden of past conflicts and lets us be open to the future to which the Spirit is guiding us."

Francis received the delegates of Ecumenical Patriarch of Constantinople, Bartholomew I, during their visit to Rome for the celebration of the June 29 solemnity of Saints Peter and Paul. The two Apostles were martyred in the city during the 1st century, and are the principal patrons of the Church of Rome. It is a tradition for the Orthodox patriarch to send a delegation to the Vatican at the end of June for the occasion of the solemnity.

In his June 28 discourse to the delegation, Francis observed how this year's audience takes place in the context of the Jubilee Year of Mercy.

"I desired to proclaim the Jubilee as a favorable time for contemplating the mystery of the Father's infinite love revealed in Christ, and for strengthening and rendering more effective our witness to this mystery," he said.

Referring to Wednesday's feast, St. Peter and St. Paul had experienced both sin and "the power of God's mercy," and thus became witnesses of the Gospel, the Pope said.

"As a result of this experience, Peter, who had denied his Master, and Paul, who persecuted the nascent Church, became tireless evangelizers and fearless witnesses to the salvation offered by God in Christ to every man and woman."

Reflecting on the example of saints Peter and Paul, the Pope said "the Church, made up of sinners redeemed through Baptism, has continued in every age to proclaim that same message of divine mercy."

Wednesday's solemnity calls to mind "the experience of forgiveness and grace uniting all those who believe in Christ," Francis said.

Although there are "many differences" in liturgical and ecclesiastical spheres between the Church of Rome and the Church of Constantinople, there is a shared experience of God's love and the call to witness to the Gospel, he added.

"Beyond the concrete shapes that our Churches have taken on over time, there has always been the same experience of God's infinite love for our smallness and frailty, and the same calling to bear witness to this love before the world."

Pope Francis went on to laud the theological dialogue which has contributed to helping recover their unity before the Great Schism of A.D. 1054.

Addressing Metropolitan Methodius, who heads the Greek Orthodox Metropolis of Boston and led Tuesday's delegation, the Pope expressed his appreciation for his work as co-president of the North American Orthodox-Catholic Theological Consultation.

Instituted in 1965, "this Consultation has proposed significant reflections on central theological issues for our Churches, thus fostering the development of excellent relations between Catholics and Orthodox on that continent," he said.

The pontiff also looked ahead to September's Joint International Commission for Theological Dialogue between the Catholic Church and the Orthodox Church. "The task of this Commission is indeed precious; let us pray the Lord for the fruitfulness of its work."

Francis went on to recall meeting Bartholomew I and Athens archbishop Beatitude Ieronymos II during his April visit to Lesbos, where they met with some of the thousands of migrants and refugees who had landed on island.

"Seeing the despair on the faces of men, women and children uncertain of their future, listening helplessly as they related their experiences, and praying on the shore of the sea that has claimed the lives of so many innocent persons, was a tremendously moving experience," he said.

"It made clear how much still needs to be done to ensure dignity and justice for so many of our brothers and sisters."

The Pope said it was a "great consolation" to share the "sad experience" with the patriarch and archbishop.

"Led by the Holy Spirit, we are coming to realize ever more clearly that we, Catholics and Orthodox, have a shared responsibility towards those in need, based on our obedience to the one Gospel of Jesus Christ our Lord."

"Taking up this task together is a duty linked to the very credibility of our Christian identity. Consequently, I encourage every form of cooperation between Catholics and Orthodox in concrete undertakings in service to suffering humanity."

Acknowledging the Pan-Orthodox Council which recently concluded at Crete, Francis concluded: "May the Holy Spirit bring forth from this event abundant fruits for the good of the Church."

In a letter addressed to Pope Francis to mark the solemnity of Saints Peter and Paul, Patriarch Bartholomew lauded the efforts which have been made toward unity between the Churches.

"Our endeavors are nurtured by this endless source for the advancement of the journey toward the desired unity of our Churches," he writes in the letter.

"The dialogue that continues between the Orthodox Church and the most holy Church of Rome is a domain that produces theological knowledge, ecumenical experience and mutual enrichment."

The ecumenical patriarch also addressed the role of the Church in honoring "honors humankind created in the image and likeness of God."

"This is why the word of the Church is and shall remain to the ages an intervention for the sake of humanity and its divinely-granted freedom."

"Life in the Church incorporates, along with the Holy Eucharist, the splendid worship and life of prayer, the ascetic and internal struggle against the passions, as well as the resistance against social evil and the struggle for the prevailing of justice and peace."

Bartholomew also addressed the unified commitment in addressing the challenges of today, citing for instance the ongoing refugee crisis.

"We are convinced that our common efforts and initiatives with regard to the global challenges of our time will continue because they constitute a good witness for the Church of Christ, serving humankind and the world," he said.

At the same time, these efforts manifest and strengthen "our spiritual responsibility before the challenges of our time for the benefit of the Christian world and humanity as a whole."