An encounter with the Manoppello Image of the Face of Christ 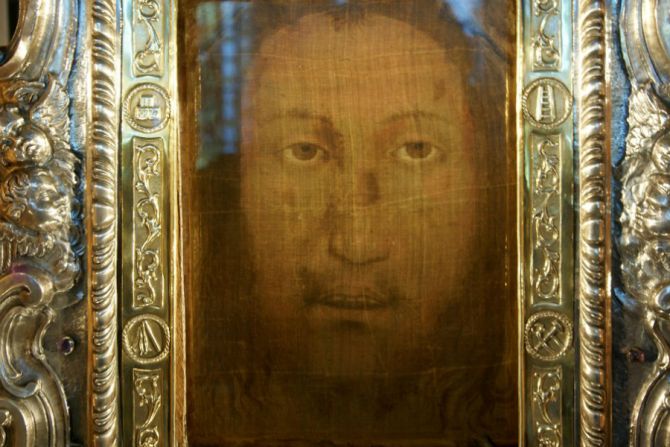 Ten years ago, Benedict XVI visited the Shrine of the Holy Face in Manoppello, which houses an image of the face of Christ which some believe to be the Veil of Veronica.

"Seeking the Face of Jesus must be the longing of all of us Christians; indeed, we are 'the generation' which seeks his Face in our day, the Face of the 'God of Jacob'," Benedict said during his Sept. 1, 2006 pilgrimage to the shrine. "If we persevere in our quest for the Face of the Lord, at the end of our earthly pilgrimage, he, Jesus, will be our eternal joy, our reward and glory for ever."

During that pilgrimage, Benedict was the first Pope in more than 400 years to kneel in veneration before the Manoppello Image which is kept in the shrine, located about 12 miles southwest of Chieti in Italy's Abruzzo region.

After his visit to Manoppello, the talk of the human face of God in Christ became a kind of mark in Benedict's pontificate.

In commemoration of the tenth anniversary of the event, Paul Badde asked Archbishop Bruno Forte of Chieti-Vasto about his memories of the day.

Badde: Your Grace, ten years ago, Pope Benedict XVI visited the holy veil, which is called the "Volto Santo" in Manoppello and was long known as the "Veil of Veronica", on your invitation as the first Pope in over 400 years to visit. You stood one meter away from the Holy Father on this historic encounter. What was going through your mind during those moments?

Archbishop Forte: In those moments, my eyes were going back and forth between the venerated image and the face of the Successor of Peter, who contemplated it intensely, as if to be captured by the image and at the same time challenged to enter into that which this veil suggests – with that extraordinary mystical and inquiring intelligence that characterized the whole work of Joseph Ratzinger and Benedict XVI. It was like attending a dialogue in which silence was more eloquent than each word: a silence from the surplus, touching and being touched on the threshold of mystery from whose depths allows itself to be illuminated.

Badde: "The Pope was delighted!" as you said in German right after the Pope's visit. Can you remember more today the immediate reaction of Benedict XVI to this "face-to- face" encounter?

Archbishop Forte: Of course. The enthusiasm of the Pope seemed to me to be like what the Greek term "enthousiasmós" means in the original sense of the word: "en theó ousía" – as an "act of being in God."

Badde: You said in 2006 that there is a "moral certitude" that the image of Manoppello is identical with that which the Evangelist John mentioned as "soudarion" from Christ's empty tomb in Jerusalem. What did you mean?

Archbishop Forte: John names it in verses 6 and 7 in the 20th chapter of his Gospel: "When Simon Peter arrived after him, he went into the tomb and saw the burial cloths there, and the cloth that had covered his head, not with the burial cloths, but rolled up in a separate place." The burial cloths – in the original "tá othónia" – correspond in all likelihood with that unique witness that we have in the famous Shroud of Turin (or Santa Sindone in Italian). The "Soudárion," on the other hand, allows me to say from my moral certainty that it corresponds with the veil from Manoppello. This certainty is supported by various data. First and foremost, the veil  was kept in Jerusalem as a precious remembrance of the Redeemer. Then it was taken to Camulia in Cappadocia where it was venerated for a long time. From there it was later taken under the threat of the so-called iconoclasts first to Constantinople and then in safety to Rome. Here it was displayed at the beginning of the 13th century for the public to view, where it was treasured as an incomparable relic at St. Peter's Basilica. When the new construction of the magnificent and current St. Peter's began on April 18, 1506, the sacred Sudarium was still located in a vault, from where the veil in all likelihood was brought to safety by Cardinal Giampietro Carafa, Archbishop of Chieti and later governor of the city (and future Pope Paul IV) in 1527 as German and Spanish soldiers ravaged Rome in the so-called "Sack of Rome." And which place was safer than a monastery on the other side of the Papal States' borders – in his Diocese of Chieti-Vasto? Manoppello was the first town behind the border, which is reached as soon as one comes out of Rome and therefore the holy veil arrived here at a Capuchin monastery after it was previously kept in sure hands in private homes. But when it was decided in 1640 to put the veil on display for public veneration, the threat that the Vatican's  Chapter of Canons could demand to get the veil back was foiled and thwarted by a certain Fra' Donato da Bomba with a chronicle in which he asserted that the holy veil had already reached Manoppello in 1506, when the new construction on St. Peter's began. Therefore, it could not be possible to be the so-called Veil of Veronica as it was back then also called in Rome. It was thus a pious lie, but nevertheless a lie, even if it was pronounced with good  intentions, which saved the whereabouts of this genuine divine proof of the passion and resurrection of Christ for the people of Abruzzi and for all of us…

Badde: How do you then explain the opposition to the Volto Santo, even still today, especially in relation with the Shroud of Turin?

Archbishop Forte: The Shroud of Turin has been well known and honored for a long time throughout the world; however, the holy face of Manoppello seems for some still to be something unheard of and new, which is not supported in the same way from the perception and tradition of the faith of the people of God. But it is not so in reality, as I have just called to mind. Between these two
incomparable witnesses, there is not only no contradiction, but also they have even been proven for a long time to concur and correspond perfectly to one another. The Trappist sister Blandina Paschalis Schlömer has compellingly pointed out a variety of concurring points that show the extreme compatibility between the face on the Sindone (or Shroud) and the face on the Sudarium. It indicates that there is a relationship between both cloths, which were established in the holy tomb in Jerusalem. In any case, the Shroud of Turin and the Manoppello Image show the inexplicable and mysterious way the same person once dead and once alive. It is Jesus Christ, the Lord.

Badde: And how do you answer the voices that claim the portrait of Christ on the veil of Manoppello is simply "painted" and indeed from a human hand, probably during the time of the Renaissance?

Archbishop Forte: The Veil of Manoppello was tested under an electron microscope and even in extra enlargements, no traces of paint were found. The image was not painted; rather, it is a true image – and that makes it even more precious because it provides us with a kind of authentic image which we have of the Redeemer of the world.

Badde: In Germany – especially since Rudolf Bultmann - the supposition that Jesus was risen only "in kerygma" meaning in the faith and in the speech and in the preaching of the apostles was frequent even among theologians. Christ could not possibly be raised from the dead. How do you as a theologian bring this modern line of thought within the Church together with the process of the rediscovery of the Holy Sudarium over the last 40 years in the Diocese of Chieti-Vasto?

Archbishop Forte: The theses of Bultmann's existentialist interpretation have been academically obsolete for a while thanks to the return and development of research on the historical Jesus. In the gap of time between the death of Jesus on the cross and the new beginning of Easter, something essential must have happened in order to transform the frightened and fleeing disciples on Good Friday into the bold heralds of the resurrection of Christ on Easter. This "something" was not a fruit of hysterical imagination of the events as, for example, Ernest Renan declared; rather, it approaches them externally as an unexpected gift that transformed their sorrow into joy and their fear into audacious courage and their escape from Jerusalem into a new life and worldwide mission. To conclude, there is almost complete unanimity in serious research since then on the historical Jesus.

Badde: Since Pope Benedict's visit 10 years ago, the Volto Santo draws more pilgrims from the whole world to Manoppello, including countless bishops from every continent. What other implications did Pope Benedict's "private visit" have on your diocese and on your faith?

Archbishop Forte: Certainly Pope Benedict's visit, which was accompanied by more than 300 media representatives and about 70 television channels from the whole world, raised the awareness of the holy face of Manoppello to a truly planetary level and drew waves of pilgrims here. What delights me even more as a believer and shepherd is this: that the visits of the "Volto Santo" are kind of bound all together with personal confession and participation in sacramental Confession and the Eucharist; and that is not an aesthetic phenomena, but a thoroughly deep and transformative encounter with the risen Christ. And that is truly a wonderful gift to us all.

Badde: On this coming September 18th, you will receive 70 Catholic and Orthodox bishops before the Holy Face in Manoppello. In 2005 you invited Pope Benedict to the Holy Veil. How did these bold and audacious initiatives come about?

Archbishop Forte: Here I must specify that Pope Benedict's decision to come to the Volto Santo was made by he himself, and totally alone. He shared that with me even before his election to be the Successor of Peter and after the election in the course of an audience, in which I participated as member of the Pontifical Council for Christian Unity. This initiative was a great gift from him. I was very happy about that and it filled me with great thankfulness towards him.

Badde: What will you tell Pope Francis about the concrete "Misericordiae Vultus" (Face of Mercy) in Manoppello, if the opportunity should ever arise?

Archbishop Forte: I have already spoken enthusiastically with his Holiness about the Holy Face of Manoppello and also sent him a beautiful reproduction. For that reason, I leave it all now in his hands and in the hands of God. It lies there now and will continue on in the right manner.

This article was originally published on CNA Aug. 6, 2016