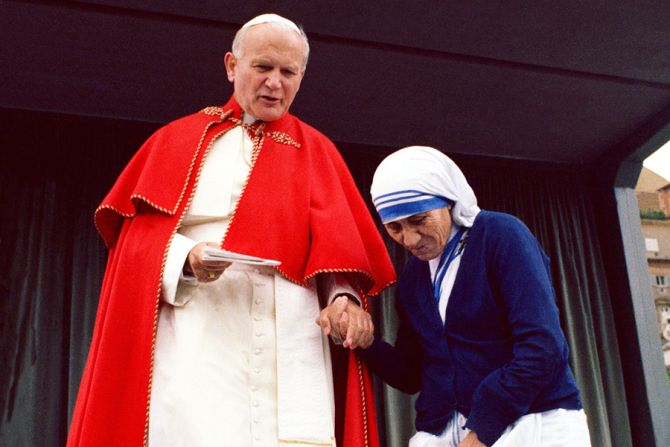 It's been said that saints often come in pairs.

Sts. Peter and Paul, Mary and Joseph, Francis and Clare, and Louis and Zelie Martin are just a handful of such saints, coupled together through marriage or friendship.

Perhaps the best-known modern saintly pair of friends would be Mother Teresa and John Paul II, whose lives intersected many times during her time as Mother Superior of the Missionaries of Charity, and his pontificate.

When John Paul II came to visit Mother Teresa's home in the heart of the slums in Kolkata in 1986, Mother Teresa called it "the happiest day of my life."

When he arrived, Mother Teresa climbed up into the white popemobile and kissed the ring of the Bishop of Rome, who then kissed the top of Mother's head, a greeting they would exchange almost every time they met.

After their warm hello, Mother took John Paul II to her Nirmal Hriday (Sacred Heart) home, a home for the sick and the dying she had founded in the 1950s.

Footage of the visit shows Mother Teresa leading John Paul II by the hand to various parts of the home, while he stops to embrace, bless, and greet the patients. He also blessed four corpses, including that of a child.

According to reports of the visit from the BBC, the Pope was "visibly moved" by what he saw during his visit, as he helped the nuns feed and care for the sick and the dying. At some points the Pope was so disturbed by what he saw that he found himself speechless in response to Mother Teresa.

Afterwards, the Pope gave a short address outside the home, calling Nirmal Hriday "a place that bears witness to the primacy of love."

"When Jesus Christ was teaching his disciples how they could best show their love for him, he said: 'Truly, I say to you, as you did it to one of the least of these my brethren, you did it to me.' Through Mother Teresa and the Missionaries of Charity, and through the many others who have served here, Jesus has been deeply loved in people whom society often considers 'the least of our brethren,'" the Pope remarked.

"Nirmal Hriday proclaims the profound dignity of every human person. The loving care which is shown here bears witness to the truth that the worth of a human being is not measured by usefulness or talents, by health or sickness, by age or creed or race. Our human dignity comes from God our Creators in whose image we are all made. No amount of privation or suffering can ever remove this dignity, for we are always precious in the eyes of God," he added.

After his address, the Pope greeted the gathered crowds, making a special stop to greet the smiling and singing sisters of the Missionaries of Charity.

Besides calling the visit the happiest day of her life, Mother Teresa also added: "It is a wonderful thing for the people, for his touch is the touch of Christ."

The two remained close friends, visiting each other several times over the years. After her death in 1997, John Paul II waived the five-year waiting period usually observed before opening her cause for canonization. At her beatification in 2003, John Paul II praised Mother Teresa's love for God, shown through her love for the poor.

"Let us praise the Lord for this diminutive woman in love with God, a humble Gospel messenger and a tireless benefactor of humanity. In her we honour one of the most important figures of our time. Let us welcome her message and follow her example."