A final farewell to Rome's exorcist: the funeral of Father Amorth 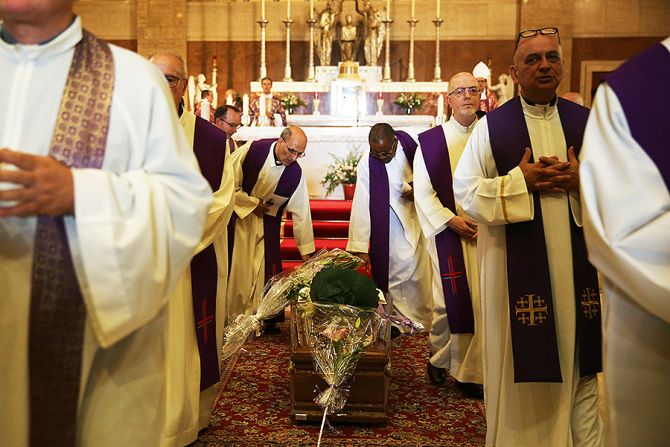 Hundreds attended the funeral Mass of Father Gabriele Amorth, the exorcist of the Diocese of Rome, on Monday, following his Sept. 16 death at the age of 91.

"He accompanied with great humility, faith, generosity, and charity those who were tormented by the evil one," and " and encouraged them on the difficult journey to liberation," a priest of the International Association of Exorcists said during the Sept. 19 funeral.

The Mass was said by Bishop Paolo Lojudice, an auxiliary bishop of Rome, at the parish of Santa Maria Regina degli Apostoli Alla Montagnola. Numerous priests of the Society of St. Paul, to which Fr. Amorth belonged, were in attendence

The priest speaking at the funeral said that Fr. Amorth's "ability to create a peaceful atmosphere during the exorcisms was admirable, communicating calm to everyone."

"Exorcists from all over the world are especially grateful to Father Gabriele for everything he did to re-propose and restore value to the mystery of exorcism," he stated, adding that the priest's "tenacious and passionate work of raising awareness among he clergy and the people of God  shows the pastoral importance of  this ministry."

The priest also noted that Fr. Amorth "never spared any effort in his labors and generously offered his work. He was honest with everyone and we exorcists always admired his great spirituality embodied in his life of prayer and his great love for the religious life, his religious institute, the priesthood, the Pope … and also Eucharistic adoration and the Virgin Mary."

The International Association of Exorcists in their statement highlighted  his "great sense of humor and ability to tell any anecdote."

"The purpose of his great availability to give interviews on radio, television and in the newspapers was to promote a comprehensive evangelization according to the Church's mandate to drive out demons in the name of God, and through the media he provided an accurate catechesis on this ministry."

Fr. Amorth was born in Modena in northern Italy on May 1, 1925.  He entered the mother house of the Society of St. Paul in Alba in August 1947, five years after meeting its founder, Blessed James Alberione. He was ordained a priest on Jan. 24, 1951.

In 1985, Cardinal Ugo Poletti, the Vicar General of the Diocese of Rome, appointed him exorcist of the diocese. He performed an estimated 70,000 exorcisms, often repeating the rite on the same persons.

Fr. Amorth drew much publicity for his books explaining his work and his public statements on the demonic.

Preceding his death, he had been hospitalized for several weeks due to lung complications.