Will the real St. Francis please stand up? 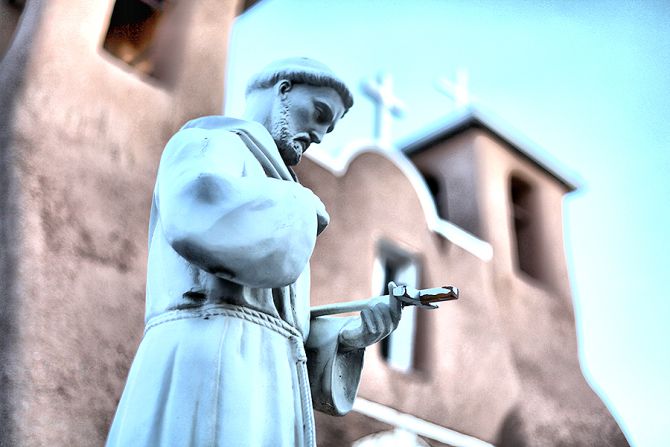 St. Francis of Assisi is widely known for his life of poverty and love of creation. But there's a lesser-known side to the friar as well – a side that showed a deep reverence for the Eucharist and attentive care to the sacred vessels at Mass.

Francis' love of creation really points to "the Christo-centrism of his spirituality," said Brother William Short, a professor of spirituality at the Franciscan School of Theology in California.

"We can trivialize it and make Francis kind of a tree-hugger," he told CNA, but "his Canticle of the creatures is a really profound way of understanding not just the presence of God, but the presence of Christ within all of creation."

On Oct. 4, the Church celebrates the Feast of St. Francis of Assisi, a deacon from Assisi, Italy who renounced his wealth to follow Christ and founded the Order of Friars Minor, later called the Franciscans; the Order of Poor Ladies, now the Poor Clares; and the Third Order of Penance, now the Third Order Franciscans. Born in the 1180s, he died in 1226 and was canonized in 1228.

St. Francis is often cited as an example of poverty – he and his friars worked and begged for just enough food and resources to survive. The saint is also known for his love of creation, and statutes of the friar adorn many gardens. He is the patron of animals, ecology, and the environment and wrote the Canticle of the Sun where he praises God and His creation.

But the saint loved God first and creation in its proper order, stressed Fr. Augustine Thompson, O.P., a biographer of St. Francis.

"He loved nature and animals, and they caused him not only to pray and praise God but to become ecstatic. Nature was a reason for him to praise God, and he loved nature. But there was no confusion between nature and God for Francis," he said.

Fr. Augustine wrote the book, "Francis of Assisi: A New Biography," published in 2012. "One of the principal conclusions of my book is that Francis had no political projects, whether for the Church or for the society," he told CNA.

"In fact, the idea that he would put himself in a position of knowing better than other people is completely contrary to his desire to be a servant of all and be below everyone else," he said.

Brother William noted that there are false assumptions that Francis was eccentric and was purely a poet and mystic who was "vague on the details" and "not very well organized." On the contrary, he said, Francis actually showed "very clear ideas and was very good at expressing them" and had "organizational and administrative skill" in founding three orders.

And while he preached peace and some may have seen him as "gentle" and perhaps "weak," there was a "very demanding side of him," Br. William added, as Francis demanded much not only of himself but also of his fellow friars in following Christ.

He has also been perceived as "simple" and "not very well educated," but Francis was actually better educated than most of his contemporaries, Br. William added. He was literate in two languages and composed poetry in the Umbrian dialect of Italian.

"He misleads people by referring to himself as simple, but he was more educated than we might think."

Another lesser-known side of Francis is the deeply religious and pious man who put a strict emphasis on care for the sacred vessels at Mass, reverence for the Eucharist, and obedience to the Church.

"The one case where he's harsh in his deathbed confession is he says if there are any friars who are not Catholic or do not follow the books of the Roman Church for their services, they are to be arrested, put in chains, and held to be handed over to the corrector of the order, the Cardinal of Ostia," Fr. Augustine said.

Of Francis' nine letters, he added, "seven of them are basically dedicated to chastising priests for using unpolished chalices, dirty altar linen, and not keeping the sacrament in a suitable place."

This was actually a common practice of the time, Br. William noted, so much so that the Fourth Lateran Council in 1215 spoke out about the need for better cleanliness in churches and for the Blessed Sacrament to be reserved in a suitable place.

Francis "made it a personal crusade of his not only to encourage others, particularly the clergy, to take care of churches a little bit better, but he personally would go with a broom and actually sweep out a church as a volunteer simply out of respect for the Eucharist and for the Lord," he noted.

And Francis also drew a "very strong connection between the Eucharist and the Nativity," he added, "that for him, his devotion to the Blessed Virgin Mary as the one who gives to the faithful the body of her son, is mirrored in the action of the priest at the Eucharist."

Francis' devotion to the Eucharist also comes out in a letter he wrote to the Brothers and Sisters of Poverty where he described the "perfect act of poverty," as Fr. Augustine summarized it:

"And the perfect act of poverty was when God Who was ruler of the universe took on weak human flesh in the Incarnation, and then not only did God Who was the ruler of all take on weak human flesh, he allowed Himself to be subject to being rejected, maltreated, tortured and killed, and then not only that, even more perfectly as an act of poverty, God Who became Incarnate and died on the cross gave us His body as our own food."

That teaching "sums up everything about Francis," he said.

Claims that Francis excoriated the clergy for their decadence were false and circulated by excommunicates decades after his death, Fr. Augustine added.

"Francis never displays in any authentic documents about him or his own writings anything except absolute submission, obedience to the hierarchy," he said.

"The stories about him humiliating prelates and so forth about not living poorly are stories that date to over 100 years after his death and come out of circles of radical Franciscans who have been excommunicated by the Pope and are against the hierarchy."

This article was originally published on CNA Oct. 4, 2016.