Who benefits from sports? Everyone, Pope Francis says 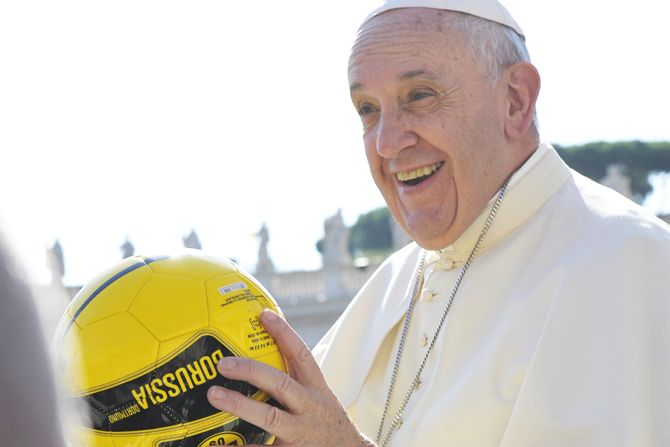 The beauty and joy found in sports, whether playing or watching, is something that benefits and unites everyone, regardless of religion, ethnic group, nationality, or disability, Pope Francis said Wednesday.

"Sport is a human activity of great value, able to enrich people's lives," he said Oct. 5. "As far as the Catholic Church is concerned, she is working in the world of sport to bring the joy of the Gospel, the inclusive and unconditional love of God for all human beings."

Pope Francis spoke at the Opening Ceremony of a conference called "Sport at the Service of Humanity." Taking place at the Vatican Oct. 5-7, the conference, which includes 150 leaders from the world of sport, faith, business and civil society, aims to establish the principles for "a new movement" in sports.

Alongside other global institutions such as the United Nations and the International Olympic Committee, German-based insurance carrier Allianz has partnered with the Pontifical Council for Culture to put on the conference.

According to the official website for the conference, the initial inspiration came from the desire to explore the interconnectedness of faith and sport, as well as the "scope and limit" of the combination.

When we see athletes give their all, sports fill us with enthusiasm and make us feel proud, the Pope said. "There is great beauty in the harmony of certain movements and in the power of teamwork," he noted.

"When it is like this, sport transcends the level of pure physicality and takes us into the arena of the spirit and even of mystery. And these moments are accompanied by great joy and satisfaction, which we all can share, even those not competing."

Pointing out the recent attention given to the Olympic and Paralympic Games by the whole world, Francis noted how these are an opportunity to "develop the talents that God has given us."

According to Vatican Radio's Chris Altieri, who is handling media for the conference, leaders and organizers share one common conviction: "that sport helps people become their best selves, and that a healthy sporting culture helps build strong communities."

The conference, then, seeks to give "robust expression to that vision" by bringing together athletes from all levels of sport alongside leaders from different faith, business, political, academic, policy and cultural communities, he told CNA July 14.

The shape the conference is taking, he said, is designed to encourage participants to share best practices which can then be presented to the broader public "in a helpful manner: to help build a sporting culture that is capable of responding to the needs of today's society."

An important characteristic of sport, the Pope said, is that it is not just for professional athletes, but for everyone: for pleasure, for recreation, for improving health, as well as for learning how to be part of a team, and how to win and lose graciously.

"This is why it is important to participate in sporting activities, and I am happy that at the center of your reflections these days there is the commitment to ensure that sport is always more inclusive and that its benefits are truly accessible to all," he said.

The Paralympic movement and other sporting groups which support those with disabilities, the Pope said, have a "decisive role in helping the public recognize and admire the extraordinary performances of athletes with different abilities and capacities."

This courageous commitment to the value of inclusion coincides well with the many religious traditions' commitment to ensuring "respect for the dignity of every human being," Francis said.

Never forgetting those on the peripheries, the Pope mentioned the many children and youth living "at the edges of society," and the enthusiasm with which they play sports such as soccer, even with a "rugged old deflated ball" in the streets of cities or small towns.

"I wish to encourage all of you – institutions, sporting societies, educational and social organizations, religious communities – to work together to ensure these children can take up sport in circumstances of dignity," he said, "especially those who are excluded due to poverty."

Another challenge facing those in charge of sporting events, the Pope concluded, is keeping sports free from commercial abuse and manipulation.

"It would be sad for sport and for humanity if people were unable to trust in the truth of sporting results, or if cynicism and disenchantment were to drown out enthusiasm or joyful and disinterested participation."

"In sport, as in life, competing for the result is important, but playing well and fairly is even more important!" he exclaimed.

"When people strive to create a society that is fairer and transparent, they collaborate with the work of God. We too, responsible for different religious communities, wish to offer our contribution for that commitment."