Charity is the heart of all missionary action, Pope Francis says 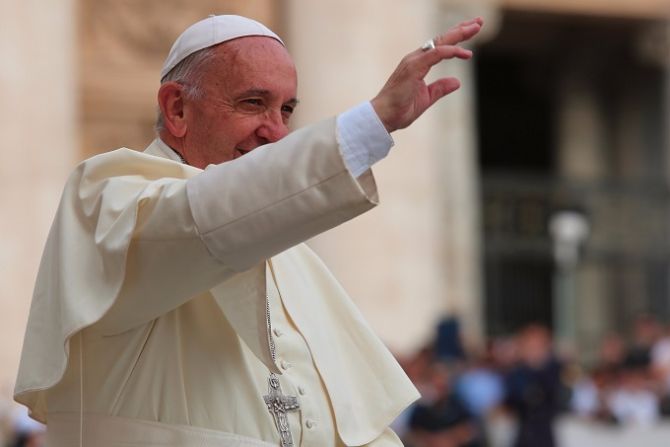 After electing their new General Superior, the Missionary Oblates of Mary Immaculate had a meeting with Pope Francis, who told them that in the midst of a rapidly changing world, humanity needs missionaries filled love and zeal for the Gospel.

"The field of the mission today seems to expand every day" with men and women in desperate situations, he said. "Therefore there is need of you, of your missionary courage, your willingness to take to all the Good News that liberates and consoles."

Pope Francis met with the Missionary Oblates exactly one week after they held elections for their next Superior General in Rome, as well as in honor of the 200th Jubilee of their founding, which is being celebrated throughout 2016.

On Sept. 30th, the 36th Chapter of the Missionary Oblates of Mary Immaculate reelected Fr. Louis Lougen as Superior General. Born in Buffalo, New York in 1952, he was first named to the position of Superior General in 2010.

Reminding them to smile, Pope Francis told the priests and brothers that they must be joyful witnesses of the Gospel.

Following the example of their founder, French priest St. Eugene de Mazenod, charity must be the "first rule of life, the premise of all apostolic actions," he said. In this way, "zeal for the salvation of souls is a natural consequence of this fraternal charity."

Francis said both the Church and the world today are experiencing "an era of great change," and that the world "needs men who carry in their hearts the same love for Jesus Christ that lived in the heart" of their founder.

"It is important to work for a Church that is for everyone, ready to welcome and accompany!" he said.

The Missionary Oblates of Mary Immaculate, founded Jan. 25, 1816, have institutes in the Americas, Australia, the Philippines and China.

As of January, the number of Missionary Oblates is 3,776 worldwide, including 46 bishops and archbishops, 2,843 priests and 316 brothers.

Pointing to the "happy and providential coincidence" that their Jubilee happens to fall during the Church's Jubilee of Mercy, Pope Francis reminded the Oblates to renew their love for the poor and for spreading the faith.

"It is necessary to seek appropriate, evangelical and courageous responses to the questions of the men and women of our time," he said.

"For this you need to look at the past with gratitude, live the present with enthusiasm and embrace the future with hope, not letting yourselves be discouraged by the difficulties you encounter in the mission, but with strong fidelity to your religious and missionary vocation."