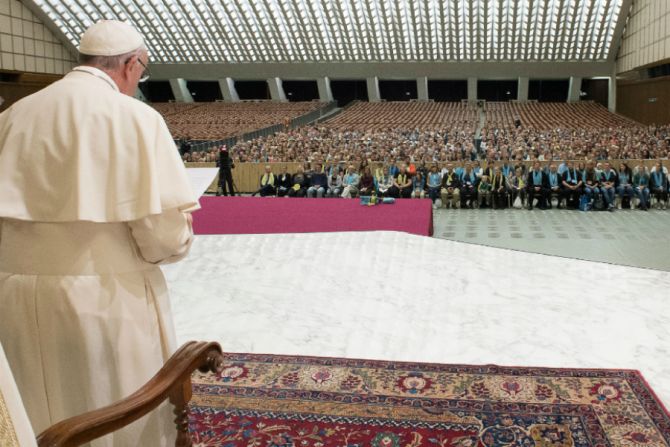 On Thursday, asked about what he likes and doesn't like in the Lutheran ecclesial community, Pope Francis said he likes Lutherans who are active followers of Christ, while he dislikes Christians who are hypocritical or who have a lukewarm faith.

"I like all the good Lutherans, eh?" he said. "There are many good ones, the Lutherans who really follow Jesus Christ. On the other hand, I don't like lukewarm Catholics or lukewarm Lutherans."

The Pope's response was made during an audience with Lutheran pilgrims at the Vatican Oct. 13. During the meeting, he condemned those Christians, who, he said, have a "hypocritical attitude," stating that you can't be a Christian without living as a Christian.

The audience with Lutherans took place ahead of the Pope's trip to Sweden for a joint commemoration of the 500th anniversary of the Protestant Reformation. The meeting in Sweden will also highlight 50 years of official dialogue between Catholics and Lutherans.

The trip will close what has been a month filled with ecumenical visits for Pope Francis, including meeting with Patriarch Ilia II, the leader of the Georgian Orthodox Church, and the more recent meeting at the Vatican with the head of the Anglican Archbishop of Canterbury, Justin Welby.

Commenting on hypocrisy as it regards the issue of refugees, Pope Francis said there is a contradiction between wanting to defend Christianity in the Middle East while also being against helping refugees and those of other religions, wanting to "kick out" someone "who really needs my help."

"If I say I am Christian but do these things, I am a hypocrite," he stated.

"This is the path that we must follow, this ecumenical path between us. To help others, to help the needy, to help the brothers and sisters in need, and to pray."

Cracking down on those who just "say," instead of "do," Pope Francis called proselytism "the strongest poison against the ecumenical path."

"The last thing you should do is 'say,'" he emphasized. "It's not licit to convince them of your faith. You must give witness of your Christian life."

When we are witnesses of the faith, it stirs up a restlessness in the hearts of those who see it and calls to mind the question: "but why does this man, this woman, live like this?"

This is the most powerful form of teaching because it prepares the heart for the work of the Holy Spirit, the Pope said. Because it is the Holy Spirit who ultimately converts hearts, not us.

Addressing young people at the audience, the Pope encouraged them to be "witnesses of mercy" in promoting the faith.

"While theologians carry on the dialogue in the doctrinal field, continue to look with persistence for opportunities to meet each other, to get to know each other better, to pray together, and to offer your help to each other and to all those who are in need."

Pope Francis acknowledged that the Church must always be reformed – that the Church "progresses, matures," but that some reforms in history were "mistaken" or "exaggerated."

"The greatest reformers of the Church are the saints," the Pope said. Those men and women "who follow the Word of the Lord and practice it."

They may not be great theologians or teachers, they may just be humble people, but "those who have hearts full of the Gospel are those who truly reform the Church," Francis said, noting that both the Lutheran community and the Catholic Church have had men and women of this type.

What unites Lutherans and Catholics is our identity as Christians, he said. "We didn't choose Jesus Christ, it's he who chose us, and this is grace, pure grace," he emphasized.

We aren't justified by ourselves or by other people, "only the blood of Christ has saved and justified us."

Cracking a joke at the end of the meeting, the Pope inquired if he could take a turn with a question, asking the Lutheran pilgrims, "Who are better? The Evangelicals or the Catholics?" The response was a hearty laugh, but no answer.