How parishes can help address the epidemic of domestic abuse 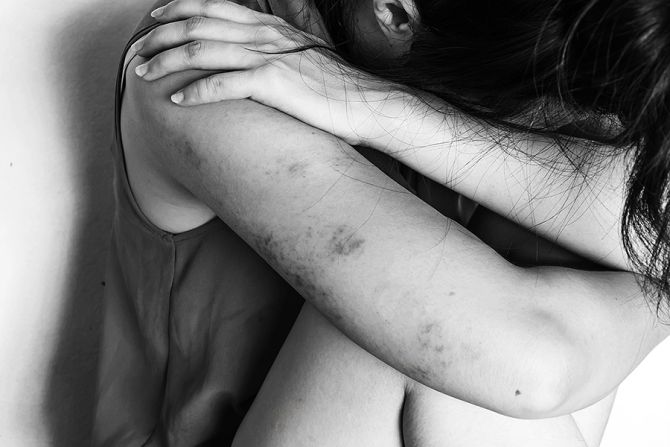 Domestic violence is a hidden epidemic that many clergy and laypersons need additional training to address, says one priest who runs the country's largest parish-based ministry to counter the problem.

"When you start talking about it, that's when people will start coming forward," Fr. Chuck Dahm, O.P., who directs domestic violence outreach for the Archdiocese of Chicago, told CNA about the problem of domestic abuse.

Fr. Chuck said that many priests and deacons have little preparation to assist victims of domestic violence, and that more seminary training would be helpful for both preparing priests and raising awareness on the issue.

He said that "When I Call for Help," a pastoral letter on domestic violence from the USCCB, is a helpful resource for clergy looking for more understanding.

October is Domestic Violence Awareness Month. According to the CDC, "intimate partner violence" can be physical, sexual, or even emotional, as with instances of stalking or "psychological aggression."

Some 27 percent of women in the U.S. have suffered intimate partner violence at some point, along with 12 percent of men, the CDC has reported.

There are many physical and psychological effects of domestic violence on victims – physical injuries and disabilities and bodily effects of stress, but also anxiety, depression, and trust issues. Children witnessing violence in the home may grow up with emotional problems like anger, or may even become abusers themselves when they are adults.

In his apostolic exhortation on the family, Amoris laetitia, Pope Francis wrote of the problem of domestic abuse:

"Unacceptable customs still need to be eliminated. I think particularly of the shameful ill-treatment to which women are sometimes subjected, domestic violence and various forms of enslavement which, rather than a show of masculine power, are craven acts of cowardice. The verbal, physical, and sexual violence that women endure in some marriages contradicts the very nature of the conjugal union."

He also insisted upon the need for parishes and priests to be ready to deal properly with these problems: "Good pastoral training is important 'especially in light of particular emergency situations arising from cases of domestic violence and sexual abuse'," he added, citing the final document from the 2015 Synod on the Family.

Catholics have responded to this dire need in various ways, from organizing a prayer campaign for domestic abuse victims to working to spread awareness of the problem and educate clergy on how to properly deal with instances of abuse.

A "toolkit" for fighting domestic abuse has been provided by the Catholics for Family Peace, Education, and Research Initiative, which includes prayers and directions for helping a victim of domestic abuse.

In recent years, the group has marked Domestic Violence Awareness Month by asking people to pray at 3 p.m. daily for domestic abuse victims, and has called for a day of prayer on Oct. 28, the feast of St. Jude the Apostle, the patron saint of hopeless cases.

Fr. Chuck Dahm has created a parish-based ministry to combat domestic violence. A key part of his work is simply preaching about it, he says, because it is a widespread problem that hides in plain sight.

There is an "overwhelming lack of recognition that the problem is more frequent, more common than people think," he told CNA. Many priests are completely unaware of cases of it, Fr. Chuck noted, although "there are people in their parishes who are suffering."

"I have gone to 90 parishes in the Archdiocese of Chicago," he said. "And after I preach about it, people walk out of the church and they tell me 'thank you for talking about this. This is long overdue. And my sister, my daughter is in it, or I grew up in it.' And this is so much more common than anybody realizes."

Sometimes, Fr. Chuck said, priests are not well trained and do not know how to handle situations in which parishioners come to tell them about abuse. They may offer inadequate advice and solutions.

Fr. Chuck participated in a symposium on domestic abuse at Catholic University of America in 2016. Since then he's seen the fruits of the conference, spreading awareness of the problem.

"A significant number went home with the plans of doing something in their diocese or their respective organizations," he said of conference participants.

Still, sometimes priests do not attend these events, Fr. Chuck acknowledged, and raising awareness about the importance of the problem is key.

Unfortunately, it's been negative incidents that have driven the conversation about domestic abuse, he said. For instance, when surveillance videos surfaced of former NFL running back Ray Rice punching his fiancée, and then dragging her off an elevator while she was unconscious, the "subsequent outrage" after that and other incidents like it "helps create more awareness about the problem."

Then "people feel a little bit more comfortable and required to speak out about this and do something about it," Fr. Chuck explained. "The publicity about negative events or harmful events is quite helpful in raising awareness."

"We're really behind on this," he said of the Church's efforts to combat the problem, but at the same time, "we're making progress."

An earlier version of this article originally ran on CNA Oct. 24, 2016.