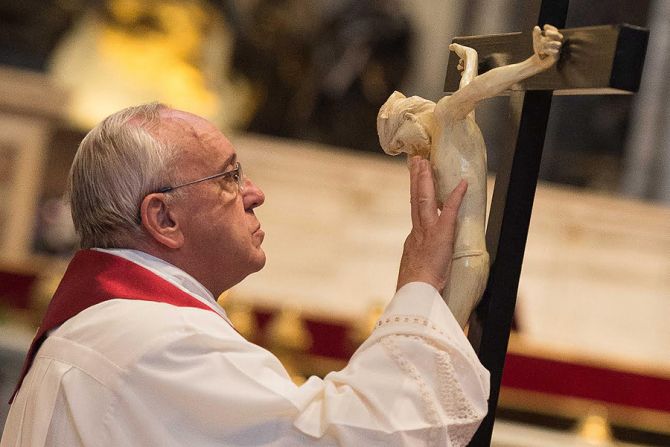 Pope Francis and the cross at the Liturgy of the Lord's Passion at St. Peter's Basilica on April 3, 2015. | L'Osservatore Romano.

Pope Francis has said the heroic martyrdom of St. Stephen is mirrored in the persecution of modern-day Christians, particularly in the Middle East.

"When we read the history of the early centuries, here in Rome, we read about so much cruelty towards Christians," the Pope said in a special Angelus address Dec. 26 for the feast of St. Stephen. "I tell you, there is this same cruelty today, and in greater numbers with Christians."

"Today we want to think about them and to be close to them with our affection, our prayer and our tears."

The Holy Father praised Catholics in the Middle East who gathered in the debris of a bombed out cathedral to celebrate Christmas Mass.

"[Theirs] is an example of fidelity to the Gospel," the Pope said of the Middle East Catholics. "Despite the trials and the dangers, they bear witness with courage to their belonging to Christ and they live the Gospel."

Pope Francis reflected on the day's reading from the Gospel of Matthew, in which Jesus warns his disciples that they will face persecution and rejection because of their faith.

"There is a conflict between the mentality of the Gospel and that of the world," Pope Francis said. "To follow Jesus means to follow his light, which was lit on that Bethlehem night, and to abandon the darkness of the world."

He said St. Stephen was martyred because he chose to bring the light of Christ to every person.

"By choosing the truth, he became at the same time, the victim of the mystery of evil present in the world," the Pope said. "But in Christ, Stephen triumphed!"

Pope Francis then encouraged Christians to greater conversion to God, who comes to us in total humility at Christmas.

"In making space within our heart for the Son of God who gives himself to us at Christmas, we renew the joyous and courageous willingness to follow him faithfully as our only guide, persevering in living in accordance with the Gospel mentality and refusing the mentality of those who dominate this world," he said."

The Pope also remembered St. Stephen's feast day on Twitter, tweeting "let us remember the martyrs of today and yesterday."